When they turn up in pantries or restaurant kitchens, cockroaches are commonly despised as ugly, unhealthy pests. But in the name of science, Johns Hopkins researchers have put these unwanted bugs to work.

In a crowded, windowless lab, scholars and students are coaxing the insects to share some crucial locomotion tips that could help future robotic vehicles traverse treacherous terrain. In the aftermath of an earthquake or on the unexplored, alien surface of another planet, for example, a cockroach could persist where humans hesitate to go. 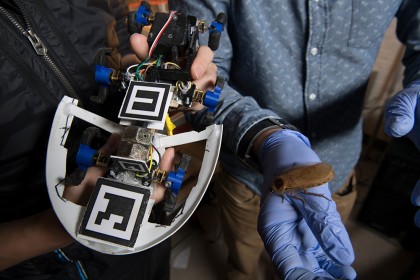 Image caption: A research team at Johns Hopkins has developed a prototype robot with movements inspired by those of a Central American cockroach species.

For missions like these, the Johns Hopkins researchers want to build robots that behave more like cockroaches. The team's early findings are the subject of two related research papers published this month in the journal Bioinspiration & Biomimetics.

Sean W. Gart, a postdoctoral fellow who puts the roaches through their paces, was the lead author of the two papers. The senior author of both papers was Chen Li, an assistant professor of mechanical engineering who directs the Terradynamics Lab. It focuses on movement science at the interface of biology, robotics, and physics.

Inside the lab, cockroaches scurry along tracks featuring two types of obstacles: large "bumps" and equally large "gaps." These mimic the holes and barriers the roaches—a Central American species with bodies about two inches long—might encounter in their rugged natural habitat, typically a rainforest region cluttered with vegetation. The bugs contort their heads, torsos, and legs until they find a way to get themselves over or across the obstacles in order to remain on course.

High-speed cameras capture the roaches' body and leg motions. The videos can later be slowed down to help the researchers learn the precise tactics that small robots might use to surmount the same types of obstacles. 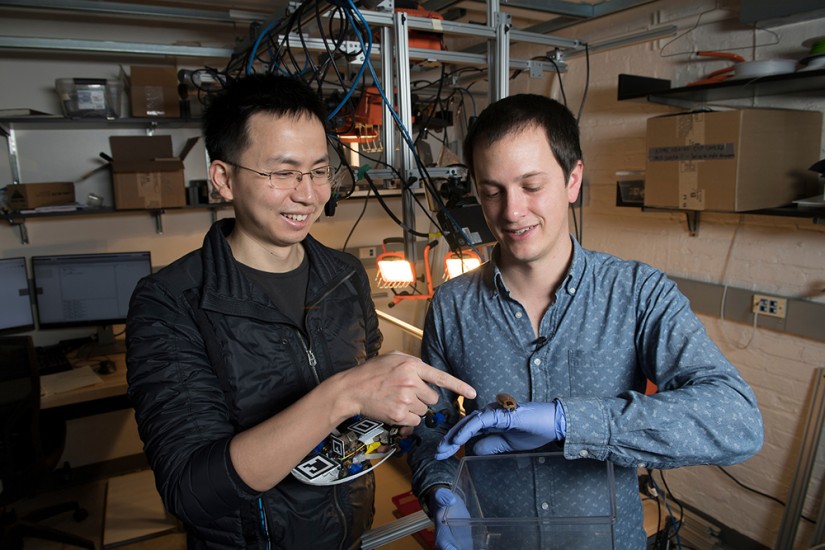 "Where they live, you have all sorts of stuff around you, like dense vegetation or fallen leaves or branches or roots," Li says. "Wherever they go, they run into these obstacles. We're trying to understand the principles of how they go through such a complex terrain, and we hope to then transfer those principles to advanced robots."

Some of these roach-inspired improvements are already being put into action. Li's team constructed a multi-legged robot to replicate the insect's running patterns. After carefully reviewing their bug videos to discover the underlying physics principles, the researchers added a "tail" to help the robots replicate body positions that helped the real roaches get past the large bumps and gaps on the lab track. This simple change increased the largest gap size that the robot could traverse by 50 percent and the largest bump size it could traverse by 75 percent.

"We're just beginning to understand how these critters move through a cluttered 3-D terrain where you have obstacles that are larger than or comparable to the animal or robot's size," says Li, who has been working with cockroaches since 2012, when he became a UC Berkeley postdoctoral fellow studying animal locomotion.

The next step will be to determine whether their findings also apply to movement through more randomly scattered terrain, such as rubble from a demolished building.

Co-authors on the journal article about traversal of large gaps were graduate students Changxin Yan and Ratan Othayoth and undergraduate Zhiyi Ren, all from the Department of Mechanical Engineering.