Spinning for the win: Repetition helps Olympians stay oriented, even as they complete complex spins and flips

Through years of practice, elite athletes train their brains so they can stay on balance after elaborate maneuvers

When Olympic figure skaters, snowboarders, and ski jumpers execute breathtaking spins and flips, they pull them off because of two fundamental improvements in the way their brains work, says Kathleen Cullen, a professor of biomedical engineering at Johns Hopkins University and co-director of the Johns Hopkins Center for Hearing and Balance.

"What's unique about these athletes is when there's a mismatch between what they expect and what actually occurred, rather than panicking, they can recalibrate on the fly to deal with the new constraints."
Kathleen Cullen
Co-director of the Center for Hearing and Balance

Everyone's brain builds models—typically for ordinary tasks like walking down the street or climbing stairs. But years and years of practicing elaborate, disorienting moves like the triple Salchow or Lutz has forged considerably more complex models in the brains of elite athletes, says Cullen, who studies the neural mechanisms that control balance.

While an Olympian is rotating or upside-down, the brain crunches data coming in from the eyes with what the inner ear knows about motion and spatial orientation. The brain combines that data with even more information from the nerves and muscles.

"Think of a snowboarder doing a double McTwist or some daring maneuver that gives us all the chills," Cullen says. "What they've done is they've practiced that maneuver over and over and over again, so that they've built a very sophisticated model of the sensory flow they expect during that routine. And what's also very unique about these athletes is when there's a mismatch between what they expect and what actually occurred, rather than panicking, they can recalibrate on the fly to deal with the new constraints."

It helps that the brains of Olympians have learned to ignore sensory signals that make regular people dizzy.

In everyday life, inner ear sensors provide our perception of rotation and generate eye movements that help keep the world looking stable as we move through it. But when we stop spinning, inner ear fluid keeps moving due to inertia and also makes the eyes continue to move. We feel like the world is still whirling. But Olympians—and skaters in particular—do not. Their brains have changed to quash the feeling.

"If you look at athletes who do a lot of spinning in training, what they've learned to do is suppress this false input," Cullen says. "Over time their brain develops this ability." 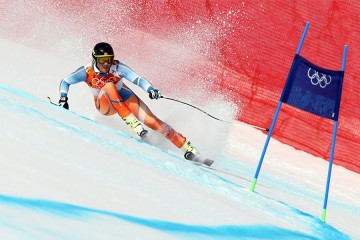 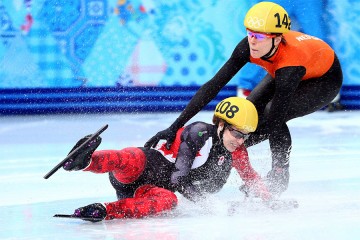 Mind of a Medalist

Published Feb 8, 2018 Video
Why do some athletes choke under pressure? The answer lies deep in the brain