Soccer fans already know the Magnus effect, even if they don't know it by name.

It's what made this goal possible:

And it's why a basketball dropped from the top of a dam seems to defy gravity as it zooms out across the water, as it does in this viral video from 2015.

It's a law of fluid mechanics that states that a spinning sphere will curve away from the arc it would make if it weren't spinning. In a one-credit Intersession course, Johns Hopkins students are learning the underlying physics that make the Magnus effect—and the other laws governing modern athletics—work.

The Physics of Sports, offered to undergraduates for the first time this year, is taught by Muhammad Ali Yousuf, an adjunct professor of physics in the university's Krieger School of Arts and Sciences. He was excited to bring it to the Hopkins classroom, especially in the lead-up to the 2018 Winter Olympics in Pyeongchang, South Korea.

"Sports play a pivotal role in the lives of many Americans, so having a scientific understanding of the athletic maneuvers is an exciting way to enrich the knowledge of both physics and sports," Yousuf says. 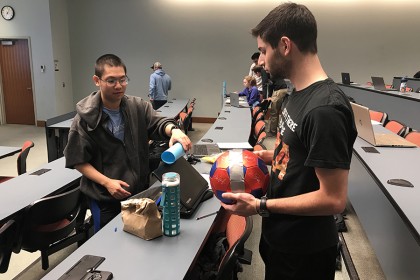 Image caption: Andrew Berger, a junior chemistry major, marks a soccer ball with duct tape to better track its movements in the computer modeling software while Raymond He prepares to drop a rolled piece of paper as part of their experiment

To demonstrate the effect, students roll objects off a clipboard and capture the midair movements on video. They then upload the video to a free, open-source physics education software called Tracker that helps them create dynamic models of their objects. The students can tinker with inputs like mass, position, and velocity to model how these variables might affect a body in motion in the real world.

"I think it's really cool how the force of air acts on the ball," said Raymond He, a junior environmental engineering major. "The Magnus effect is the coolest thing I've learned so far."

They cover other laws of physics that are observable in athletics, like what makes the Fosbury Flop such an efficient way of clearing the High Jump. When jumping over a bar in a forward motion, the body's center of mass is located near the belly button, and the jumper has to generate enough force to clear the bar using brute strength and speed. For the Fosbury Flop, the jumper arcs backwards, a move that actually moves the body's center of mass to a location at the center of the arc—outside the body. By moving the center of mass outside the body, the jumper gains an advantage of several inches.

"Now, everybody who jumps uses this knowledge," says Yousuf.

It's one of the many ways the laws of physics have redefined athletics.

"Physics is not just a collection of equations and laws," says Yousuf. "It is a way of looking at the world around us. Athletes are competing for fractions of a second, or even a millimeter to win, and science is hard at work in improving their performance." 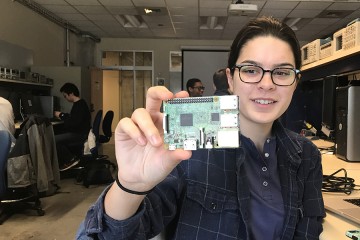