Hosted by the Healthcare Business Association, the competition brought 10 student teams from universities across the nation to Baltimore to create strategies to increase compliance for a pneumonia vaccine in either children or seniors.

The teams were tasked with leaning on behavioral economic theory to create and defend their unique strategy for the case. A panel of Pfizer executives determined the winners.

The Johns Hopkins team employed a design thinking approach that focused on creating a catch-all for pitfalls within possible solutions.

"We put ourselves in the shoes of the stakeholders to understand the barriers confronting each of them, allowing us to develop what we believe is a comprehensive, simple, and feasible intervention," said Priya Arunachalam, a Global MBA student at Carey who was part of the team.

Arunachalam was joined on the team by fellow Global MBA students Stephen DeMars and Mishra Isran, and David Buxton and Dexter Waters from the Bloomberg School of Public Health.

The team members attributed their win to the "innovation and feasibility" of their solution, as well as their presentation's "funneled approach," which started with the bigger picture before focusing on the heart of the idea.

"We were careful in how we defined the problem, and developed a comprehensive intervention inspired by solutions that have been used to address similar problems in different populations," Waters said.

Added Buxton: "For me, this has been one of the best parts of my Johns Hopkins experience thus far. You can learn a lot from working collaboratively with students in the other programs and schools, and I feel that Johns Hopkins really does a great job at fostering these environments." 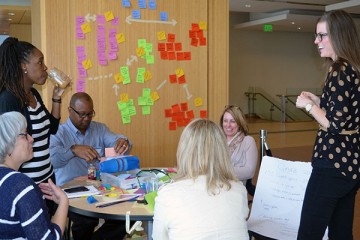 Problem-solving, outside the box