As chairman and CEO from 1997 to 2004, he helped grow the Rouse Company into one of the nation's largest commercial real estate developers

Anthony W. Deering, a longtime Baltimore civic and business leader and an emeritus member of the Johns Hopkins University and Johns Hopkins Medicine boards of trustees, died Friday. He was 72. 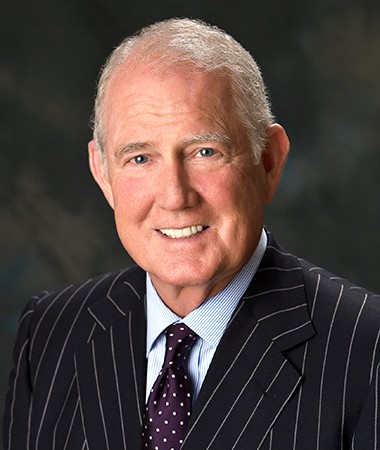 Deering spent most of his career at the Rouse Company, which he first joined in 1972 and, as chairman and CEO from 1997 to 2004, helped grow into one of the nation's largest commercial real estate developers.

Under his leadership, the Rouse Company operated with a philosophy that improving the quality of life in the communities it developed was an essential part of doing business. In that spirit, when the company was sold in 2004, Deering designated $25 million to the Rouse Company Foundation, quadrupling the charity in size and enabling its ongoing support of local housing and job training initiatives.

Added Jeff Aronson, chair of JHU's board of trustees: "I am truly saddened by the loss of Tony Deering. Tony was not only an exemplary trustee to our university, he was a wonderful colleague and friend to so many. No matter the question, the depth of Tony's wise counsel and thoughtful analysis was matched by his great concern for others at Hopkins and in Baltimore."

"We are grateful for the countless ways he helped build, nurture, and energize all the communities he touched—at Hopkins, in our city, and around the country."
Ronald J. Daniels
President, Johns Hopkins University

"With finesse, intelligence, and old-fashioned grace, Tony helped steer and strengthen Johns Hopkins University and Medicine, offering guidance to decades of deans and faculty, presidents, and students alike," Daniels said. "We are grateful for the countless ways he helped build, nurture, and energize all the communities he touched—at Hopkins, in our city, and around the country.

"On a deeply personal note, Tony and his wife, Lynn, were two of the first people we met in Baltimore. Their warmth, openness, and friendship helped make it home. Tony will be sorely missed by all who had the good fortune to know and work with him and to call him a friend."

Deering was an early and avid supporter of Johns Hopkins' redevelopment efforts in East Baltimore and of the Live Near Your Work program, which helps university and health system employees buy homes in neighborhoods near the university's Baltimore campuses.

Along with his wife, Deering created the Charlesmead Foundation decades ago to support many Rouse Company Foundation initiatives in the city, while also underwriting programming at Center Stage, the Baltimore Museum of Art, and the Johns Hopkins Berman Institute of Bioethics. The institute's home, Deering Hall, which opened in 2011, was named to honor the Deerings' longtime support.

"Tony Deering is one of a kind," said Ruth Faden, the Berman Institute's director from 1995 to 2016. "In extraordinary ways, ways only Tony could do, he made Johns Hopkins a better place, he made Baltimore a better place, he made the world a better place. So often, Tony allowed others, indeed intended for others, to take credit for the change he initiated. His eyes were always on the prize, not the credit."

Deering had a wealth of financial services and investment management experience, and he most recently served as chairman at Exeter Capital, a private investment firm based in Lutherville, Maryland. He was also on the board of directors at Under Armour.

"Tony was widely respected as the type of business leader and visionary who was willing to make bold moves in pursuit of innovation, but he was also a strong believer in serving his community," said Paul Rothman, dean of the medical faculty and CEO of Johns Hopkins Medicine. "He lent his sound guidance to our institution for 15 years, as a trustee and emeritus trustee, and we will miss him, as an advisor, and of course, as a friend."

Deering earned a bachelor of science degree from Drexel in 1969 and an MBA from the Wharton School at the University of Pennsylvania in 1971. Both Deering and his wife received honorary degrees from Johns Hopkins University in 2015.

Deering is survived by his wife of 48 years; three children—Heather, Spencer, and Maron; and six grandchildren.

Tagged obituaries, board of trustees