Johns Hopkins cell biologists report what they believe is the first-ever creation of tiny, gelatin-like clumps called hydrogels inside living cells. The ability to create hydrogels on demand, they say, could advance the effort to study elusive cell structures that form in nature under certain conditions—and to uncover how these structures contribute to human diseases.

Too many or too few natural hydrogels could affect a cell's ability to function, and may be linked to neurodegenerative diseases such as Lou Gehrig's disease.

"The exciting part of this work is not just that we made hydrogels, but that we're now equipped with this powerful technique that lets us ask fundamental and very challenging questions about them," says Takanari Inoue, an associate professor of cell biology at the Johns Hopkins School of Medicine and senior author of the report on the research, which was published online today in the journal Nature Materials.

A hydrogel is any solid gel material that holds together because of tight connections among its molecules, but also absorbs water. Man-made hydrogels are used in such everyday products as contact lenses, disposable diapers, and hair gels.

In living cells, most floating structures are enclosed by membranes that help them retain their shape in the cells' watery cytoplasm. But when cells undergo stress—heat, starvation, or infection, for example—proteins and RNA molecules can clump into stress granules, which are free of enclosing membranes and often form small globs—akin to hair gel suspended in a tub of water. 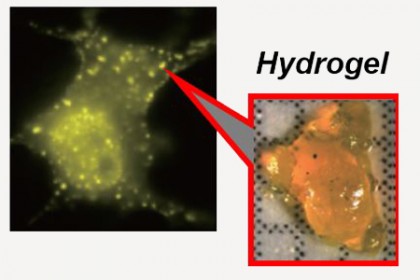 Image caption: On the left, light green spots indicate the presence of hydrogels. On the right is an image of hydrogel material

Some researchers have hypothesized that the accumulation of these stress granules—natural hydrogels—may be linked to neurodegenerative diseases such as ALS, also called Lou Gehrig's disease. Too many or too few stress granules could impact a cell's ability to function, they suggest. But finding evidence has been difficult.

"These hydrogels lack membranes, so it's hard to isolate and purify them," Inoue says. "They're so fragile that we can't just collect them like we can with nuclei or mitochondria."

Even worse, he says, when their surroundings change, stress granules switch from being hydrogels to a different type of structure, called liquid droplets, the same way hair gel might dissolve in water if you heat it up. Scientists worldwide have tried to inject chemical hydrogels into living cells to study them, but usually the cells become sick, likely due to toxicity from the chemicals.

In a bid to overcome such barriers to research, Inoue's team designed a system they dubbed iPOLYMER, composed of two binding proteins, FKBP and FRB, and an immunosuppressive chemical and drug called rapamycin.

Previous studies had shown that FKBP and FRB exist as separate proteins, but once rapamycin is added, it binds to both, pulling the proteins together into a firm complex. Designing the proteins so that they'd form the right physical structure for hydrogels took a significant amount of trial and error, Inoue says. Observing under a microscope as they added rapamycin, Inoue's team could see hydrogels form.

"To our knowledge, this is the first time anyone has made a hydrogel in a living cell this way," Inoue says.

The scientists are now modifying the iPOLYMER system so that the hydrogels integrate RNA molecules into their structures, making them better mimics of the stress granules seen in human cells. The scientists would also like to create a system in which the proteins form liquid droplets so that they can compare the effects of the liquid droplet and hydrogel forms of the protein structures. 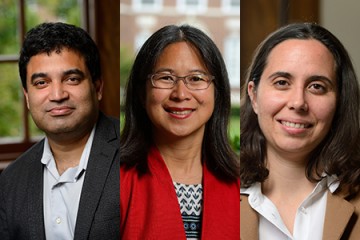 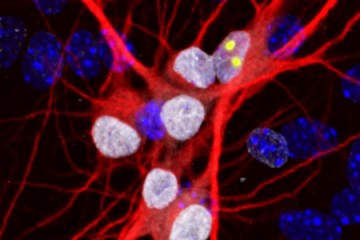