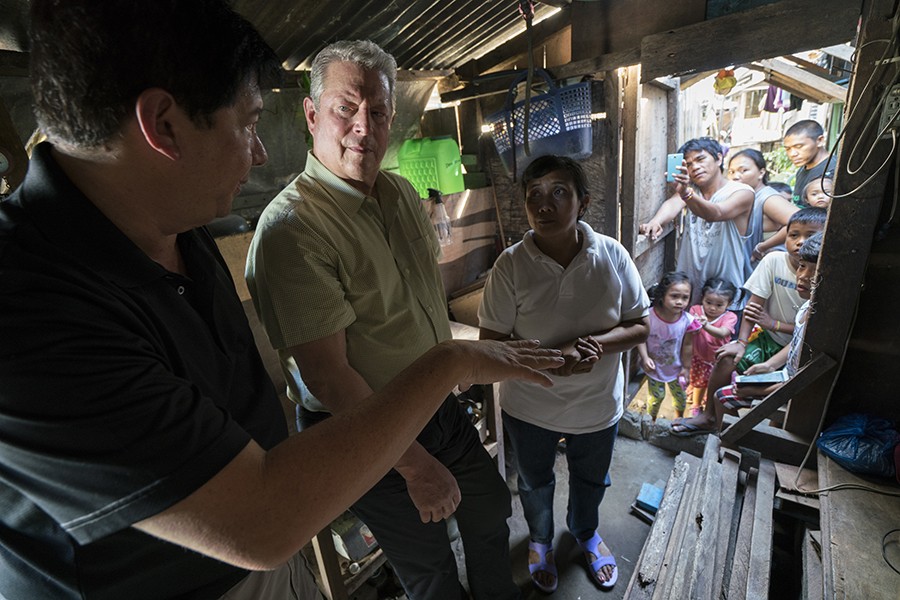 The sound of dripping water prefaced a shot of a glacier quickly melting into an ocean surrounding it, and the quotes of climate change skeptics filled the Remsen Hall auditorium.

"Al Gore's movie, An Inconvenient Truth, won him an Oscar. And yet, much of the movie is nonsense. Sea levels may rise 20 feet is absurd. Even the IPCC …"

"This is Al Gore; he always goes down the road of hyperbole. Not only is he losing the argument on climate change, but he's losing the science as well …"

"… and it's the most severe winter storm in years, which would seem to contradict Al Gore's hysterical global warming theories …"

The Johns Hopkins Office of Sustainability and Student Leadership and Involvement co-hosted a screening on Thursday of An Inconvenient Sequel: Truth to Power—the follow-up to former Vice President Al Gore's 2006 documentary about climate change, An Inconvenient Truth.

JHU was one of many U.S. and Canadian universities and organizations to host a screening in conjunction with Ro*Co Films, an international documentary film distributor, followed by a live Q&A webcast with Gore. Viewers were able to submit questions in advance for the former vice president to answer.

The film follows Gore as he influences international climate policy—such as addressing air pollution in India leading up to the 2015 U.N. Climate Change Conference in Paris—and travels the world training "an army of climate champions."

Ruthie Burrows, a member of JHU's undergraduate Class of 2014 and a graduate of the Johns Hopkins Bloomberg School of Public Health's Master of Health Sciences program, attended the event and said it was inspiring to see people excited about the movie.

"In my [Global Environmental Change and Sustainably] courses, we saw these horrible, disparaging images of the global consequences of climate change," said Burrows, a climate leader trained as part of Gore's Climate Reality Leadership Project. "There came a point when I could no longer silently sit in my classes."

After she graduated, Burrows said, she committed herself not to be complacent. As part of the Climate Reality Leadership Corps, Burrows writes letters to the editors of publications, speaks to government representatives, and blogs about climate change.

"I came back from the training inspired, knowing that that power of individual actions can become the power of many," she said. "I would absolutely encourage students to do the same."

During the webcast, Gore gave similar advice to viewers, many of whom asked how they could help be a part of a solution to the climate crisis.

"There is strength in numbers," he said. "It's no mistake that in these recent movements … students have been in the vanguard, and students are, once again, beginning to play a huge part in this climate movement."

When asked where to go for truthful information about climate change, Gore cited the Climate Reality Project's website, the Intergovernmental Panel on Climate Change, Skeptical Science, and Union of Concerned Scientists.

Gore also noted that students could access the film and other award-winning documentaries on filmplatform.net.

"My best advice is to be active and vocal," Burrows said. "There's a history and continuing momentum of climate action on this campus. … The administration cares about the students' opinions, and students have an immense power to make change."