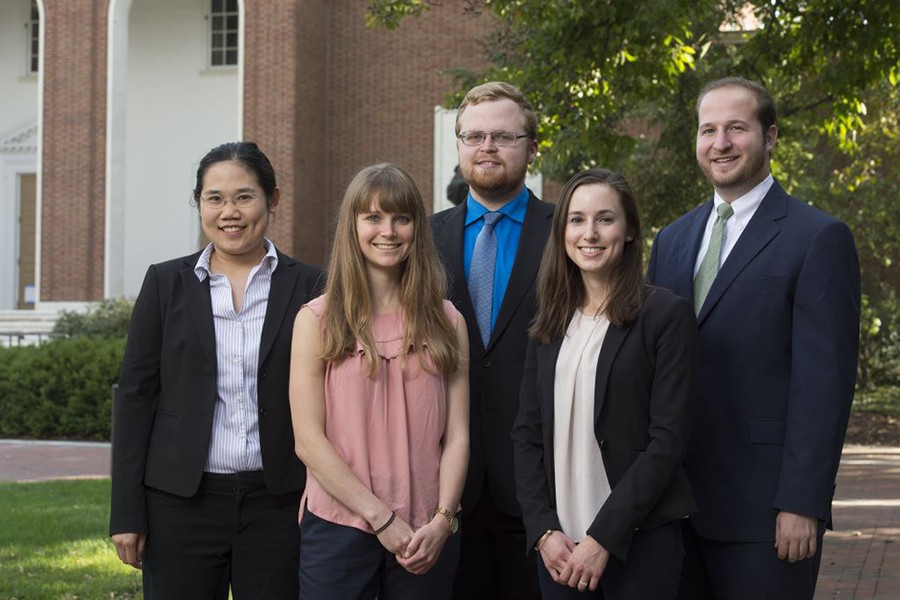 "These Siebel Scholars exemplify the Whiting School of Engineering's mission to prepare students to be 21st century leaders," says Ed Schlesinger, dean of the Whiting School. "They have demonstrated extraordinary creativity, determination, and promise in their studies, and we are proud of their achievements."

The Siebel Scholars from Johns Hopkins University are:

Before pursuing her PhD at Johns Hopkins in biomedical engineering, Friedrich received with distinction a bachelor's degree in mechanical engineering with a mathematics minor from the University of Delaware. She works in the lab of Jeff Wang, which focuses on the development of new technologies for analyzing biomolecules through research advances in micro- and nano-scale sciences.

Friedrich was awarded a National Science Foundation Graduate Research Fellowship to research microfluidics, which is the study of microscopic fluids, and she works in single molecule detection technologies. She developed a method to achieve unprecedented sensitivity in detecting, sizing, and quantifying DNA molecules in a solution. She has co-authored 19 journal articles and conference presentations, and received the Best Paper award at the IEEE MEMS 2016 conference.

Kosmides came to Johns Hopkins after receiving a bachelor's degree in biomedical engineering from Rutgers University in 2012. Her research focuses on engineering new platforms for cancer immunotherapy, including paramagnetic approaches which contain no residual magnetism, and nanoparticles that can biodegrade after treatment. She has patented new therapeutics that help turn off cancers' defense mechanisms while activating the immune system to decrease toxic side effects.

Her work has resulted in 12 conference presentations, six manuscripts, and three national fellowships from the NSF and National Institutes of Health. She participated in an exchange program with the French Embassy.

Kosmides is passionate about leading outreach to both her peers and the community. She designed and taught a new immunoengineering course to JHU undergraduates and has given interactive demonstrations on her research to families at a local library. She has also served as co-chair of the first JHU BME professional development organization, EDGE, and has mentored Baltimore City students in academics and nutrition through Baltimore-based mentoring organization Thread and a community garden.

Lewis transitioned into the PhD program in the Department of Chemical and Biomolecular Engineering after completing both his master's and bachelor's degrees in the same department. As a PhD candidate, Lewis has created numerous systems that mimic the complex characteristics of living organisms to explore the effect of oxygen gradients on wound healing and cancer migration. His work as led to breakthrough discoveries published in PNAS and Nature Protocol.

As a recipient of the National Cancer Institute Nanotechnology for Cancer Research Fellowship, Lewis demonstrates dedication to collaborative research to address the challenges of cancer. In addition, Lewis has mentored five students and encourages research for undergraduates by helping them explore invaluable experiences in design and bioengineering. Lewis is a leading member of the Graduate Student Liaison Committee, helping to organize and strengthen social connections among fellow graduate students through sports, social gatherings, advocacy in departmental policies, and various outreach efforts in Baltimore, including beautifying parks and other community spaces, educational projects, and STEM initiatives in schools.

Limpitikul is an MD-PhD student in biomedical engineering and winner of the prestigious King's scholarship from Thailand. Her basic science research focuses on understanding and treating the biophysical defects that underlie cardiac arrhythmia, while her clinical research involves prediction of sudden cardiac death. Her bench-to-bedside work has won her four highly competitive fellowships, multiple international young investigator's awards, and earned her the role of editor for the American Medical Student Research Journal.

Through 12 first author or co-first author peer-reviewed papers, 27 conference presentations, and five patent applications, he has demonstrated how particles can be used for biomimetic drug delivery—a synthetic process that mimics an organic process. He has been recognized for his work with a National Research Service Award Fellowship, the BMES Graduate Student Design and Research Award, and an Achievement Rewards for College Scientists Scholarship.

Throughout his graduate career he has held numerous leadership positions including BME Council co-president, director of professional development for BME EDGE, and has volunteered at the local science museum to teach nanotechnology concepts to children. In addition, he has mentored seven undergraduate students, two of which received the Provost's Undergraduate Research Award.