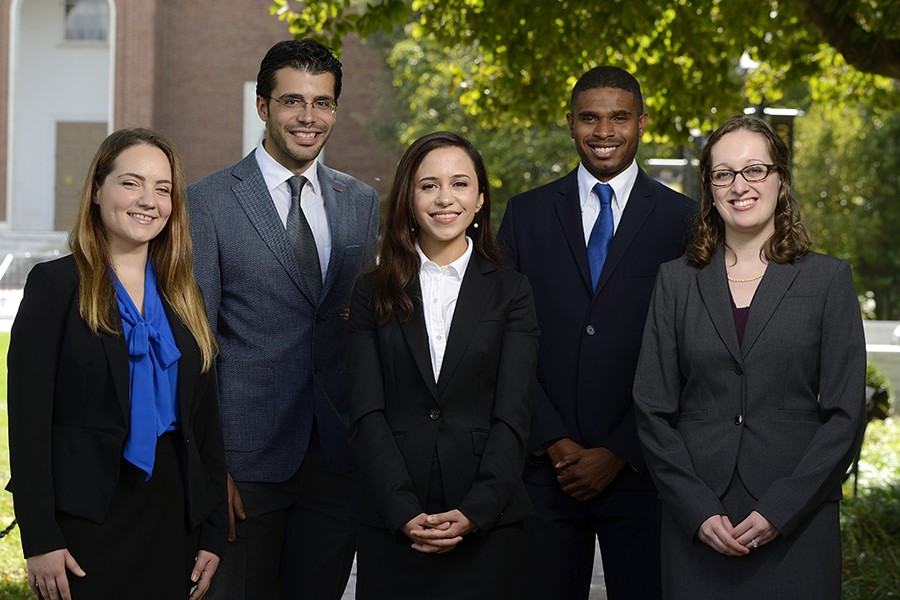 As they work toward medical breakthroughs for disease treatment and surgery, five engineering graduate students from Johns Hopkins University have won key support for their research through the prestigious Siebel Scholars program.

The program honors the best and brightest from the world's top business and engineering schools, with the goal of advancing cutting-edge research and collaborative solutions for pressing global problems.

The Johns Hopkins recipients—doctoral students in biomedical engineering, mechanical engineering, and chemical and biomolecular engineering—are among 92 honorees in the 2017 Siebel Scholar class. They join a formidable network of more than 1,000 researchers and entrepreneurs who have taken part in the Siebel program since its founding in 2000, representing schools that include Harvard, MIT, and the University of Tokyo.

In addition to lifelong membership and collaboration within this distinguished community, the award from the Siebel Foundation provides $35,000 to each student for his or her final year in graduate studies.

Deans from respective schools—in this case, JHU's School of Medicine and Whiting School of Engineering—select the honorees based on academic prowess and leadership achievements.

"Recognition from the Siebel Foundation of our bioengineering program, of the promise of our students' research, and of our strengths in entrepreneurship, collaboration, and translation, is a terrific honor," said Ed Schlesinger, dean of the Whiting School. "We are grateful for the foundation's support."

More on this year's Siebel Scholars from Johns Hopkins:

Adriana Blazeski, from Struga in the Republic of Macedonia, is pursuing her doctorate in biomedical engineering. Her research under Leslie Tung focuses on engineering heart tissue by combining extracellular matrix—the collection of components surrounding heart cells—with cardiac cells from human stem cells. Working with a matrix that incorporates biochemical and structural signals, she hopes to cue the cells to behave more like human heart tissue, with the ultimate goal of treating heart disease and testing cardiac drugs. Before joining Johns Hopkins, Blazeski earned both her bachelor and master's degrees in biomedical engineering from the University of Michigan in Ann Arbor. Interested in the advancement of women in STEM fields, Blazeski co-founded the Graduate Women's Empowerment Network (GWEN) at Hopkins in 2014.

Lindsay Clegg, from the St. Louis suburb of Florissant, Missouri, is working toward her doctorate in biomedical engineering. Her thesis at Johns Hopkins, where she works under Feilim Mac Gabhann, concentrates on building cutting-edge, molecularly detailed computational models to understand cellular signaling in health, disease, and in response to potential therapeutics. She focuses on a signaling protein called VEGF, which is key to promoting blood vessel growth in ischemic disease, and also for tissue engineering and regenerative medicine applications. Clegg, who is passionate about STEM education, has worked with a Baltimore high school robotics team for four years. As an undergraduate at Purdue University, she majored in biomedical engineering with a minor in German.

Berk Gonenc, from Izmir, Turkey, is earning his doctorate in mechanical engineering. His research under Iulian Iordachita aims to improve the clinical outcomes and safety of retinal microsurgery, which ranks as one of the most challenging and high-risk areas of surgical practice. By integrating fiber optic sensors with robotic devices, Gonenc has been developing novel surgical instruments that allow for safer, more precise operations. Before coming to Hopkins, he studied mechanical engineering as an undergraduate at Middle East Technical University, then earned his master's in the same field from Washington State University. Gonenc volunteers for the JHU Community Garden and has received recognition from the Department of Computer Science for his leadership in mentoring.

Shiva Razavi, from Tehran, Iran, is pursuing her doctorate in biomedical engineering. Under the supervision of Takanari Inoue, she engineers devices composed of biomolecules such as DNA, proteins, and lipids. These synthetic devices are deployed in cells to reprogram cellular functions, and can also be used to study how cellular molecules are networked together. Beyond research, Razavi was the co-president of the BME PhD Council and co-founded BME EDGE to expand extramural career development for PhDs. Razavi also mentors female students in STEM fields though the U.S. Department of State's NeXXt Scholars Program. Before enrolling at Hopkins, Razavi studied mechanical engineering at the University of Illinois at Urbana-Champaign and worked at Bosch and Harvard Medical School.

Quinton Smith, from Albuquerque, New Mexico, is earning his doctorate in chemical and biomolecular engineering under Sharon Gerecht. Working in the emerging field of vascular tissue engineering, he's exploring a promising new approach of using pluripotent stem cells from patients as a therapeutic tool to replace or augment diseased vasculature. He's specifically seeking ways to improve techniques for transforming stem cells into blood vessels by mimicking mechanical cues present during development. As an undergrad, he earned his degree in chemical engineering from the University of New Mexico. Smith enjoys mentoring Baltimore high-schoolers in STEM education and undergraduate students in the lab, and he is active in leading social and professional development events in his department. 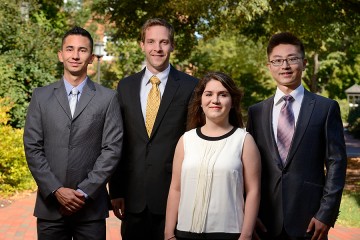 Published Dec 1, 2015
They are pursuing bioengineering projects that could yield diagnostic, treatment advances