More than 40 recipients of PURA grants present their findings 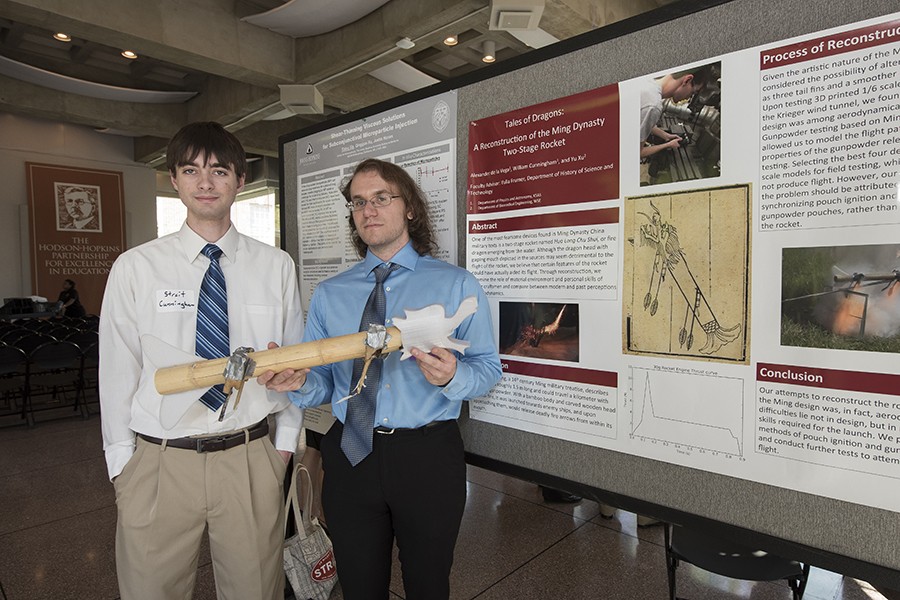 Did you know that, like birds, humans undergo structural changes in the brain depending on the time of year? Or that often, prostate cancer is deadliest after it moves to the bone, where it depletes essential stem cells and is much more difficult to detect and treat? 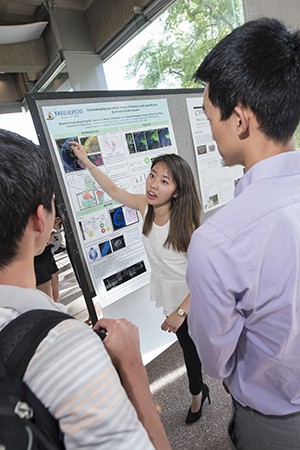 Did you know that the 14th-century Chinese military developed multistage, dragon-shaped rockets that were probably more effective at frightening enemies than actually hitting a target?

These were just some of the topics covered in more than 40 student presentations given Tuesday in the Glass Pavilion on Johns Hopkins University's Homewood campus by past recipients of the Provost's Undergraduate Research Award. Students who received PURA grants in the 2013-2014 and the 2014-2015 cycles presented on the progress of a year or more of research into various artistic, scientific, and medical questions.

The program, which began in 1993, gives undergraduates the resources to pursue a research project of their own design. It was founded on the belief that encouraging undergraduates to engage in research activity enhances the learning experience and helps to develop investigative skills.

Some students built devices, like Gwendolyn Hoffmann, who developed a silicon tray that sits atop an electromagnetic current that optimizes the flow of fluid and proteins in Malaria tests. Others tested existing technology, like Yunfan Fan, who tracked the reliability of a new gene sequencer device and discovered that it could reveal more information in less time, making it a viable option for use in doctors' offices.

"Every good study has more questions at the end than at the beginning."
Sounak Roy, JHU sophomore

A few students focused on singular—and unusual—questions. Seniors Alex De La Vega and Streit Cunningham, who study physics, wondered about the plausibility of a dragon-shaped weapon described in the Huolongjing, a military treatise from the early Ming Dynasty. They built a prototype from materials most likely used by the rocket's originators: bamboo for the body and a dragon-shaped head and tail fins made from 3D-printed plastic that mimicked the density of elm wood. They found recipes for gunpowder and (safely, they assure) tested various gunpowder and packing techniques to achieve the trajectory described in the Ming papers.

Though they had one semi-successful launch in which the thrust from the back rockets resulted in the device flopping forward, De La Vega and Cunningham did not succeed in creating the multistage rocket that launches into the sky and rains down fire, as described in the Huolongjing. They concluded that while it is possible that the rocket did exist, it was most likely used as a scare tactic or as military propaganda.

Alaina Gold, who recently graduated with a degree in psychology, used her PURA award to determine if structures in the human brain undergo physiological changes throughout the year. She looked at "cognitively normal" images of brains gathered during Alzheimer's studies—the control set that doesn't exhibit any impairments—and found a density spike in late spring, and a sharp decrease in density in mid-autumn. The structures of the brain most affected were the hippocampus and its sub-regions, which influence memory, and the amygdala, which contributes to fear responses. She concluded that the time of year should be considered as a variable in future cognitive tests and studies of the brain.

Sophomore Sounak Roy knew that prostate cancer is often deadliest when it has metastasized to the bones, where it anchors in place of important stem cells. But he wanted to know how the cancer metastasizes. Working in a School of Medicine laboratory, he tested the theory that genes CXCR04 and CXCR7 are the mechanism by which cancers migrate to the bone. Using CRISPR gene editing technology, he cultivated cancer cells with an overabundance of these genes in petri dishes (in vitro) and in mouse subjects (in vivo). He confirmed that when the genes are overexpressed, the cancer cells migrate much more quickly than normal cancer cells.

"Every good study has more questions at the end than at the beginning," says Roy, and sure enough, he faces a number of hurdles as he finishes his study. Extracting tissue from the bone of live subjects is painful for patients, and analyzing the extracted material comes with its own obstacles for scientists. Roy said he plans to use additional funding he received from JHU's Dean's Undergraduate Research Awards program to move his research forward.