Leaders from GE, IBM speak at conference on professional leadership opportunities for women

The Carey Business School hosted a three-day conference on its Harbor East campus exploring the opportunities for women to pursue professional leadership and the obstacles they face while seeking such roles.

"Broadening Perspectives on Women in Work: An Interdisciplinary Conference," held Oct. 12-14, brought together leading industry figures and academic researchers in management science, business, technology, economics, psychology, and sociology to discuss both the progress that women have made in attaining leadership and the barriers they still encounter.

More than a year in preparation, the event was organized by Valerie Suslow, the vice dean for faculty and research, as well as Carey assistant professors Colleen Stuart, Erik Helzer, and Sharon Kim. Helzer credited Karen Peetz—the retired president of BNY Mellon, a Johns Hopkins trustee, and a 1981 alum of the Carey Business School—for being the catalyst of the conference.

"She cares deeply about the advancement of women in business and approached school leadership to sponsor a women's leadership initiative at Carey," Helzer said of Peetz. He added that a supporting gift from Peetz helped make the conference a reality. 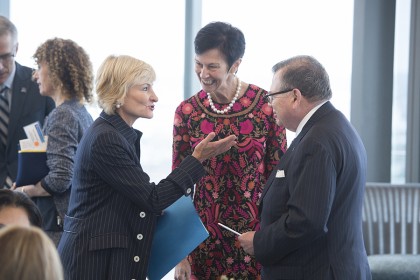 Beth Comstock, vice chair for business innovations at GE, and Bridget van Kralingen, senior vice president for industry platforms at IBM, made keynote remarks during the weekend at separate gatherings attended by Carey administrators, alumni, students, staff, and other guests.

In addition, Peetz moderated a Friday luncheon panel discussion with Jyoti Chopra, chief diversity officer at BNY Mellon; Redonda Miller, the president of Johns Hopkins Hospital and a 2004 Carey alumna; and Karen Appleton Page, the senior director of partnerships, channel, and industries at Apple and a 1997 alumna of Carey. About 100 people attended the luncheon.

During the final two days of the conference, some 50 scholars from across the U.S. and Canada gathered to hear more than 15 of their colleagues present research on various issues linked to the weekend's theme. These included gender gaps in wages and leadership roles, harassment of women in politics, the use of flexible work policies, working women's attitudes toward risk-taking, and gender differences in academic medical careers.

Stuart said the weekend's events provided "a helpful reminder of the strides that have been made toward women's advancement in the workplace. At the same time, they also highlight that these problems are deeply entrenched and difficult to solve. Much more work will be necessary if we hope to continue making progress." 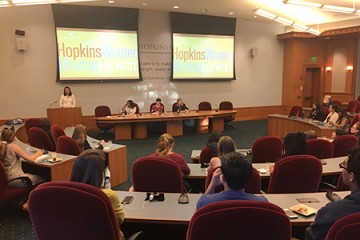