"It's the only industry in which people who hire you are comfortable saying, 'We have this senior male anchor and we need a younger woman to soften him," said Chenault-Fattah, a former anchor for NBC affiliate in Philadelphia. 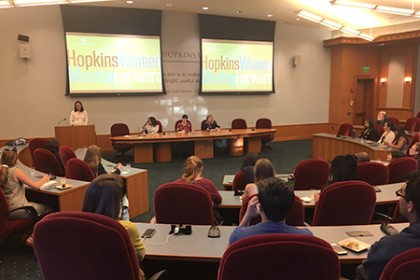 On another occasion, Chenault-Fattah recalled, she was told she looked like "a grandma" next to the candidates to be her co-anchor. She said she had an equally blunt retort ready for that one, but advised Johns Hopkins students Wednesday: "Let them know it's not appropriate. Go to HR."

Chenault-Fattah was one of three accomplished Hopkins alumnae—all current trustees of the university—invited to lead a conversation titled "Hopkins Women Moving Forward." Beside her sat Karen Peetz, the former (and first female) president of the Bank of New York Mellon; and Sarah O'Hagan, a former reporter who served as a founding board chair for the Fuller Project for International Reporting and as co-chair of the International Rescue Committee. Chenault-Fattah also previously practiced law in New York City.

The trustees shared both professional and personal experiences, emphasizing the value of taking risks but also riding out the accompanying struggles.

Peetz, who regularly appeared on "Most Powerful Women in Banking" lists, recounted packing up her family and moving to London for an assignment with J.P. Morgan Chase. In the office, she said, the reactions from the men she supervised expressed: "Who is this lady, where did she come from, and will she go away soon?"

Peetz attributed some of the "grit component" essential for her line of work to lessons learned as a young athlete: "That you have to compete to get the spot you're in, that you compete in a team, and that you win some you lose some—but winning is better."

The panelists also spoke of the importance of both seeking support from other women and providing it.

O'Hagan, who serves on the advisory board of JHU's School of Advanced International Studies, helped launch a support network for the school's female alumni that is now active in four cities around the world. She described the group as "a missing link" for many who craved "a space to understand how women navigate in the international policy area."

Chenault-Fattah shared a story of finding a mentor during her college years. Frustrated by the scarcity of women and black professors at Hopkins at that time, she connected with a young business professor at Morgan State—"somebody almost from the start who was interested in me."

"She is now mayor of Baltimore," Chenault-Fattah said of that mentor, a young Catherine Pugh.

When an attendee asked how a female CEO, for example, should relate to other women in the workforce, Chenault-Fattah emphasized that "there's more that unites us than divides us."

Added Peetz: "You can lead no matter what your role is."

Tagged career center, board of trustees 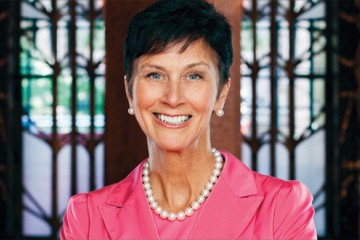 Published June 27, 2017
Karen Peetz, a Hopkins alum who serves on board of trustees, recently retired after three years as president of BNY Mellon