Moving a Ping-Pong ball three meters may sound like a simple task, but a group of Johns Hopkins first-year biomedical engineering students learned first-hand that sometimes the simplest task can be the most difficult.

Students in the Department of Biomedical Engineering's Modeling and Design course were given foam core, rubber bands, wooden dowels, glue, and six hours to create two structures that could transport a Ping-Pong ball three meters. Some designs featured a series of ramps, while others were more intricate, using catapults, carts, barrels, and even a 360-degree loop.

"The teams presented their projects with a two-minute elevator pitch describing the path the Ping-Pong ball will take on its journey," said Eileen Haase, director of the undergraduate biomedical engineering program. "Today they demonstrated how well their devices actually work. The primary lesson the freshmen learn from this project is to allow time for testing." 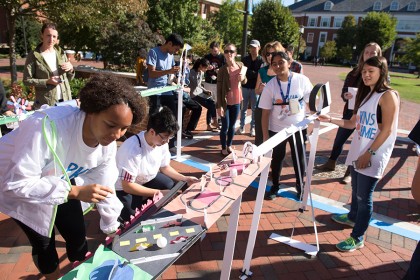 One member from each team wore a heart rate monitor to measure any changes that occurred as he or she demonstrated the team's device. This data will be collected and used for future projects.

Students built their structures in the BME Design Studio and carried them outside, where they were required to adapt to a new environment (and a slight breeze). Teams were judged on creativity, modeling prowess, and the success of the structure.

"Brainstorming was important," said first-year student Cindy Choi. "In our original design, the ball was moving too fast so we had to adjust the height and angle of our structure."