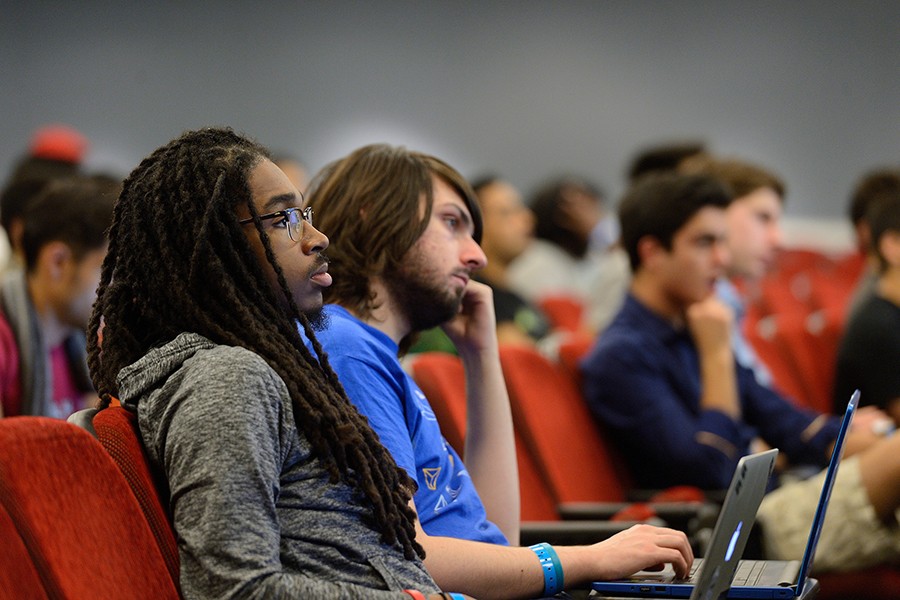 Image caption: Students in the Hodson auditorium watch presentations by their fellow hackers

In rooms around Hodson Hall on Saturday night, clusters of students tapped away at their laptops amid a scattering of snack bags, soda cans, book bags, and belongings. Some took time out from their teamwork to study for a test. A few napped using balled up sweatshirts as pillows.

It was the final night of HopHacks, the annual Johns Hopkins "hacking" marathon in which students are challenged to develop a new tech solution or product within 36 hours. From 9 p.m. Friday night through 9 a.m. Sunday morning, teams of students from more than 75 universities worked intensely on their projects, exploring publicly available data sets, APIs, and other frameworks for computing. They also received feedback and guidance from student mentors and major tech sponsors such as Facebook, Google, the Johns Hopkins Applied Physics Laboratory, Siemens, Booz Allen Hamilton, Major League Hacking, and Deloitte. 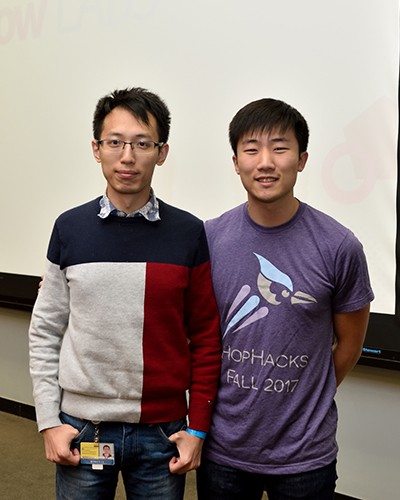 Image caption: Bowen Li (left), a fourth year PhD student in health sciences informatics at the School of Medicine, won the John Snow Labs award for best use of the dataset for his project, ReQuest2D

For these dedicated students, HopHacks is a weekend of immersive learning and problem solving. It's also an opportunity for them to explore their passions.

Inspired by the recent hurricanes in Texas and Florida, a team calling their product Relief developed and designed an app for connecting aid workers with much-needed supplies in areas affected by natural disasters. Described by team leader George Botev as "Craigslist for disaster relief," the app would allow individuals as well as major institutions such as hospitals and medical schools to donate supplies during natural disasters.

The app's responsive design means that aid workers in the field can arrange to receive supplies using their phones, cutting down on barriers to relief. Their backend design uses a search algorithm built on word2vec, a machine learning technique developed by Google, to make their platform's search feature substantially faster and more reliable.

"We were really inspired by what happened with Hurricanes Harvey and Irma," said Botev, a sophomore computer science major. "Places like Hopkins could donate excess supplies like water, bandages, or rubber gloves and connect with aid workers directly to determine what's needed, and where. Our system is smart enough to know that if you search for water, you might also need iodine, because iodine purifies water and the two are usually related in disaster-related searches."

Despite having little hope of finishing in time for the hackathon deadline the following morning, Aavik Pakrasi and Kevin Kostlan continued to work on a pet project that makes learning to code more like a game. Kostlan, a fourth-year PhD student in computational neuroscience, pointed out that one of the leading frameworks for creating software, Eclipse, has an unfriendly and unadorned user interface, which makes working in the program less engaging for the user. The duo's theory is that if they can borrow design principles from online games, they can increase the number of people who learn to code—and stick with it.

"Kevin has said to me plenty of times that not enough people know how to code, and I completely agree," said Pakrasi, a senior applied mathematics and statistics major. "We want to gamify the process of learning to code so that people have an incentive to continue to learn this skill."

In addition to being a place to explore new solutions, HopHacks is also a competition, with monetary awards for overall winners, as well as sponsor-specific awards. The complete list of winners includes: