Reporters have duty to 'get you answers you need' from the president, April Ryan says

At Johns Hopkins, White House correspondent talks about what it's like to cover the Trump administration and the effects of President Trump's attacks on the press 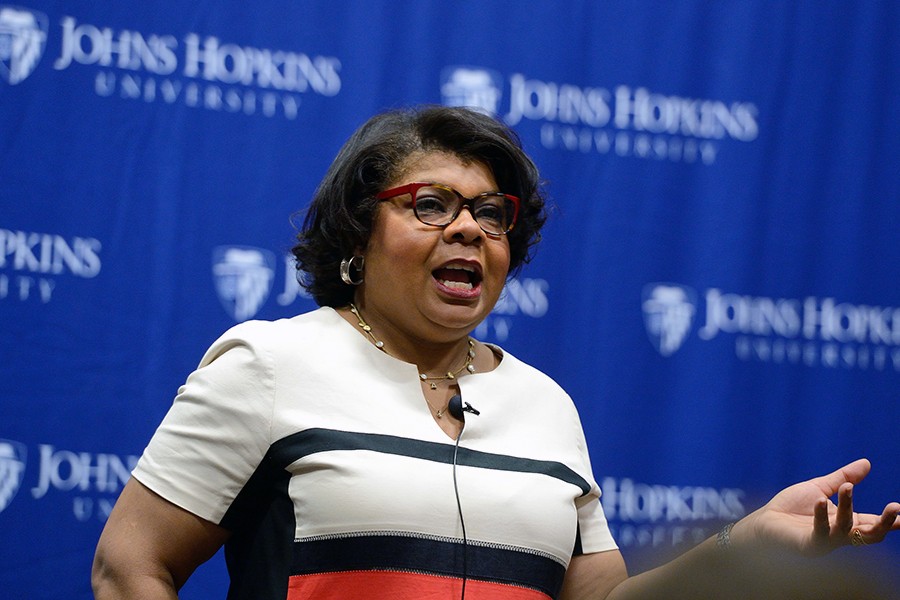 At the outset of the first JHU Forums on Race in America event of the academic year, Johns Hopkins University Provost Sunil Kumar set aside his carefully worded introductions and went off-script. He described how the speaker series, which began in 2015 and has featured a variety of diverse and sometimes polarizing speakers, has affected him.

"There were times when I was uplifted," he said at Mudd Hall on the university's Homewood campus Tuesday night. "At times I was a little afraid for our future, at times I was despondent, and many times I was uncomfortable. But I think that's part of what's great about this series: Candor comes with the loss of comfort, and that is a good thing for us."

"We are the first line of questioning of an American president, and ultimately we get you answers you need."
April Ryan
White House correspondent

His remarks come at a time of marked social and political upheaval, particularly on college campuses across the country. They also helped introduce the night's speaker, a person all too familiar with candor and discomfort: veteran White House correspondent April Ryan, who for the past 20 years has reported on the presidential administrations of Bill Clinton, George W. Bush, Barack Obama, and Donald Trump.

Ryan began her talk by speaking about some of the disparaging remarks made about the press in recent months, and also about the moment during the 2016 presidential campaign when she knew Trump was unlike any other political figure she had encountered.

"As the candidates were traveling the country and talking to crowds, there was one candidate in particular who I noticed had a disdain for the press," she said, referring to Trump. "With each administration, there's a pushback on the press. But they know it's a part of the democracy, part of the First Amendment. It's a give and take—we are there, actually embedded, in the White House. But with this candidate, it was totally different, and it just got worse and worse." 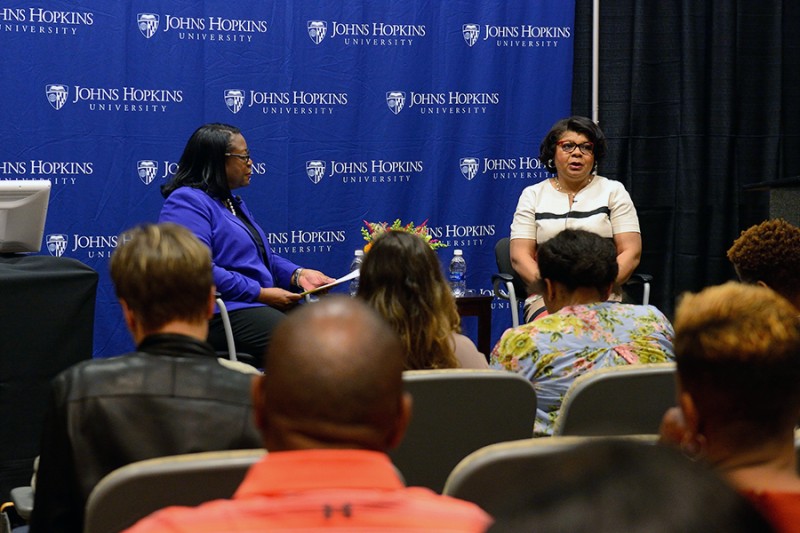 Image caption: "Young people are the lifeblood to make change," Ryan said during her talk to JHU students, which was moderated by Tracey Reeves (left), director of media relations for Johns Hopkins University

Still, Ryan said, despite the public denigration of the press, despite feeling singled out by the president when he requested she set up a meeting with the Congressional Black Caucus, and even despite being named in a Trump campaign ad as an "enemy of the president,"she will continue to go to work in the White House, sit in her assigned press room seat (third row center, always), and report on the Trump administration.

"Here's the thing—I'm going to go to the briefings, because I believe it's a part of the framework of the Constitution," she said. "It's a part of the transparency for the American people. It's not about us [the journalists] when we talk about the First Amendment, it's about you. We are the first line of questioning of an American president, and ultimately we get you answers you need."

Ryan added that in contemporary politics, it's more important than ever to reach across the aisle and to collaborate with people who have different views.

"Any good reporter who's worth their pen has relationships in every party, everywhere, because if you don't, you don't know what's going on," she said.

Students, especially, have a key role to play in contemporary politics, Ryan said—a duty to leave their comfort zones and to express themselves with candor, as the provost said in his introductory remarks.

"You are here to challenge the system," Ryan said. "... Young people are the lifeblood to make change. Do you know the vast majority of people who work in the White House in any administration are young people in their 20s? They are shaping the dynamic in this world. You have more power than you realize."