Johns Hopkins University physicist Natalia Drichko is part of a group that won a $450,000 grant from the National Science Foundation to organize and run a four year sequence of summer school meant to prepare graduate and post-doctoral students to work with a new generation of quantum technology. 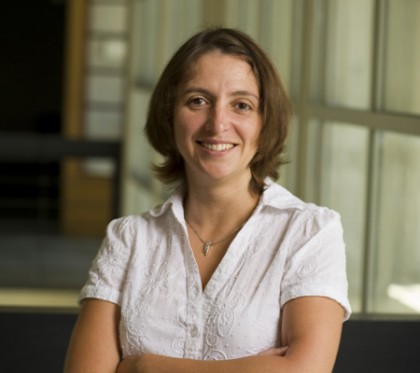 The award to establish the Quantum Science Summer School is part of the first round of what the federal agency calls the Growing Convergent Research at NSF program. It's meant to encourage sustained collaborations among scientists from different disciplines "to address the most compelling scientific and societal challenges."

Indeed, Drichko—a research professor in the Henry A. Rowland Department of Physics and Astronomy—said the first two-week summer school conducted in June on the Johns Hopkins campus attracted more than 200 students, of whom nearly 50 participants were selected from more than 30 institutions across the country and a range of scientific disciplines.

"At Hopkins, we have a very dynamic and leading group in the related area of quantum materials," Drichko said. "And so we were extremely proud that Hopkins could host the first Quantum Science Summer School in the sequence supported by the NSF Convergence Program."

Physicists, chemists, mathematicians, and computer scientists gathered at the Bloomberg Center for Physics and Astronomy for ten days of lectures and practical exercises focused on quantum computing and new materials for potential use in quantum technologies.

Launched in the early 1980s, quantum computing relies on physical phenomena from the strange world of quantum mechanics, as opposed to classical mechanics. The quantum bit, or "qubit"—the fundamental computational unit—can exist simultaneously in two states rather than one, both a 0 and 1, and contain more information than a classical bit.

As new quantum technology emerges, the industry faces a shortage of experts in the field. The Quantum Science Summer School is meant to help meet that demand.

"The cultural and intellectual challenge comes from a need to equip students with practical knowledge of multiple fields relevant to quantum revolution," said the NSF summary of Drichko's project. Students attending the summer course "are exposed to science and technology beyond what they could be exposed to in traditional classroom settings or typical conferences/workshops."

Along with lecturers from such institutions as the California Institute of Technology, Yale, and the Massachusetts Institute of Technology, there were industry representatives, including scientists from IBM and Google, said Drichko, who is one of five project organizers. The other four organizers are affiliated with MIT, Cornell, and Penn State University, where summer courses are scheduled to be held in the next three years.