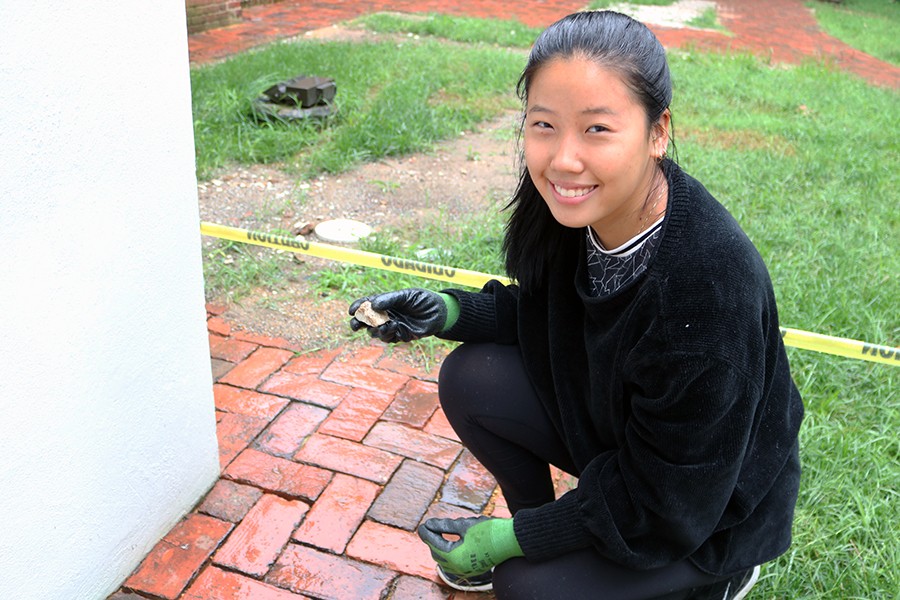 The workday began at 7 a.m. for three Johns Hopkins University student archaeological interns. They laced up their work boots and put on clothes that could withstand lots of dirt and intense heat.

They headed to the office—outside of Homewood Museum on the university's Homewood campus—where a large fence surrounded their work site and a pop-up tent protected them from the summer sun. By 7:30 a.m., the construction crew began to dig, and the students sifted through the soil in hopes of finding an artifact that tells a story.

"It isn't a traditional archeological investigation, but it still gives me experience within the field," said Mike Tritsch, a rising sophomore who is majoring in archaeology and Near Eastern studies.

Tritsch said he found a large amount of window and bottle glass, whiteware, mammal and bird bone, handmade nails, pieces of metal, and a couple of coins.

The students were enlisted to help on the recommendation of EAC/Archaeology, which was hired to monitor an excavation project for a new storm drainage system. The project began the day after graduation.

The team did not find any intact cultural features associated with Homewood, said archaeologist Robert Wanner, because most of the area previously was disturbed by earlier utility installations. But the wine bottle remnants unearthed by Tritsch—identified as antiques because of impurities in the glass—are consistent with tales of the parties thrown by former owner Charles Carroll Jr., who lived at Homewood with his family in the early 1800s.

Another student intern, junior Chisom Okereke, found oyster shells, which were often thrown out the window in previous centuries after the oysters inside were eaten.

"Hearing the likely story behind [the oyster shells] helped me put history into perspective," she said. "As many differences as there were between centuries, there are plenty of similarities."

Senior Jen Nadel, a history of art major, found a piece of white and blue Canton porcelain, a term used to describe several types of exported Chinese ceramic. Team members said they hoped that the recently discovered pieces match those on display in the basement of Homewood Museum.

On days when the weather did not permit outside work, the students re-cataloged artifacts from 1980s Homewood excavations or examined the various colors and textures in samples of the dirt.

The excavation project is expected to be completed by the end August; Homewood Museum remains open while the work is ongoing.