She wondered whether it was wise to continue to push herself. The higher they climbed, the more dramatic the slope, and in some places, it became a near-vertical ascent. But the sight of her classmates in front of and behind her, each eager to reach a summit nearly 2,200 feet above sea level, spurred her on.

Once she summited Lion's Head in Table Mountain National Park, Toby Harris took in the aerial views of the city sprawling beneath her—a city she had come to know intimately, one she was beginning to feel a part of, and one whose people continually surprised and inspired her. 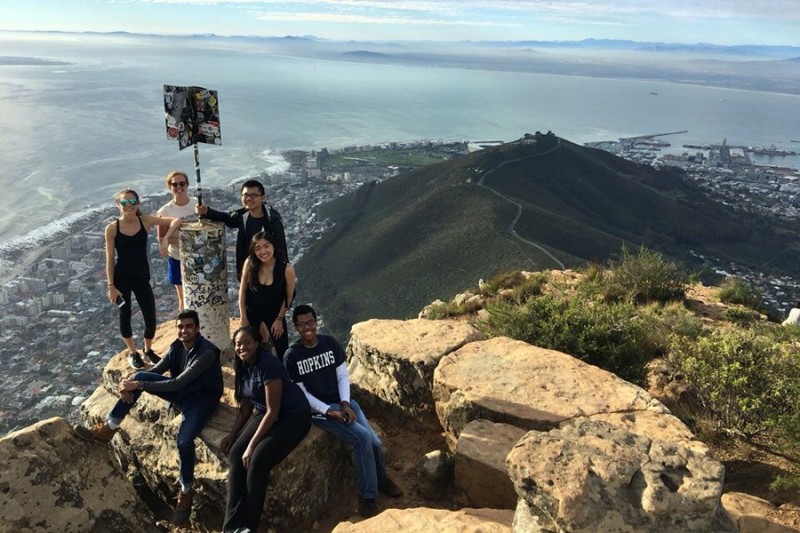 It wasn't her first trip to Africa, but it had so far been the most profound.

For 46 days this summer, Harris, who will begin her junior year at Johns Hopkins University this fall, worked with a human rights group in Cape Town, South Africa, as part of a study abroad course offered by the Public Health Studies program in the Krieger School of Arts and Sciences. Public health studies, which is among the university's most popular undergraduate majors, has offered the study abroad trip six times since 2011. This year, students from any undergraduate major were challenged to address issues of health care delivery, research, and health promotion in an underresourced environment.

In addition to taking a course at the University of Cape Town, the students—11 in all—were assigned as interns to nongovernmental organizations in the area. Harris worked alongside classmate Max Morris at Triangle Project, an international human rights organization that aims to protect individuals who are lesbian, gay, bisexual, transgender, or intersex. The two drafted policy briefings dealing with sensitivity training for health providers, visited the nation's parliament to sit in on committee meetings at which organization members meet and build relationships with representatives, and designed information pamphlets about sexually transmitted infections.

"The students who seek out these opportunities are looking to challenge themselves, and they are open to really new experiences."
Lisa Folda
Assistant Director of Public Health Studies

"Health care providers are often misinformed about the reproductive and mental health needs of this group, while services are frequently offered in a prejudiced manner that can lead to further stigmatization, fear, and a reluctance to seek out medical care," Harris wrote in a blog post chronicling her trip. "Nonetheless, it has been inspiring to see the community responding to these inequities and disservices."

Other students worked for the Desmond Tutu HIV Foundation Youth Centre in Masiphumelele township; St. Joseph's Home for Chronically Ill Children, a pediatric care facility for children with chronic, life-limiting, and life-threatening illness; and two programs—one for women and one for men—operating under the Zimele Project, an adolescent health and outreach program that is administered by the Desmond Tutu HIV Foundation.

The Women of Worth program, offered through the Zimele Project, demonstrated to rising senior Jasmine Okafor the importance of studying women's health.

"Historically, women have been considered second-class citizens," said Okafor, a public health studies and behavioral biology double-major. "Being able to see the societal impact of that dynamic—how it makes these women behave—was really interesting. So now I'm definitely interested in women's health." 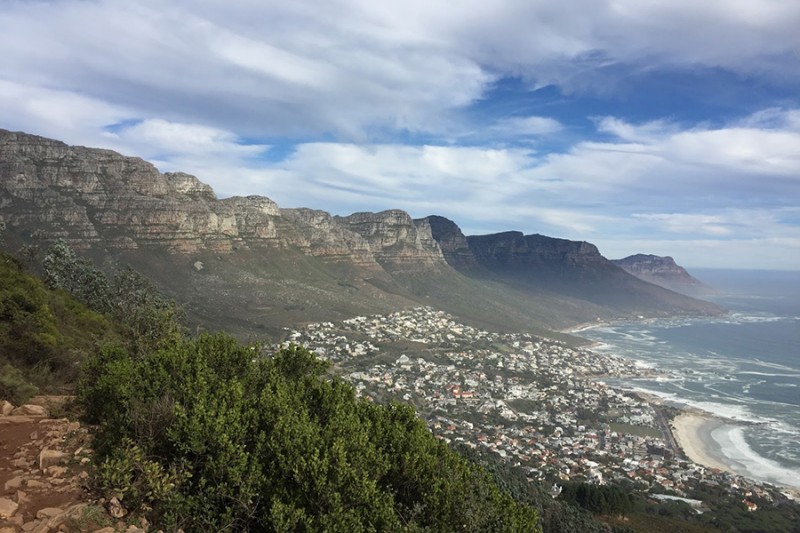 Arjun Mathur, a rising senior majoring in public health studies, said he joined the trip purely for the experience of visiting South Africa. Following his work with Men's Dialogues under the Zimele Project, he said, he came away with a far greater understanding of the intersection of public health issues and social politics.

"South Africa is one of the countries with the highest income inequality in the world," Mathur said. "The disparity is huge, and in the city you can see it's expensive to live, but then you go literally 10 minutes outside the city to a township with no running water or electricity. We saw that disparity firsthand and how that affects social issues." 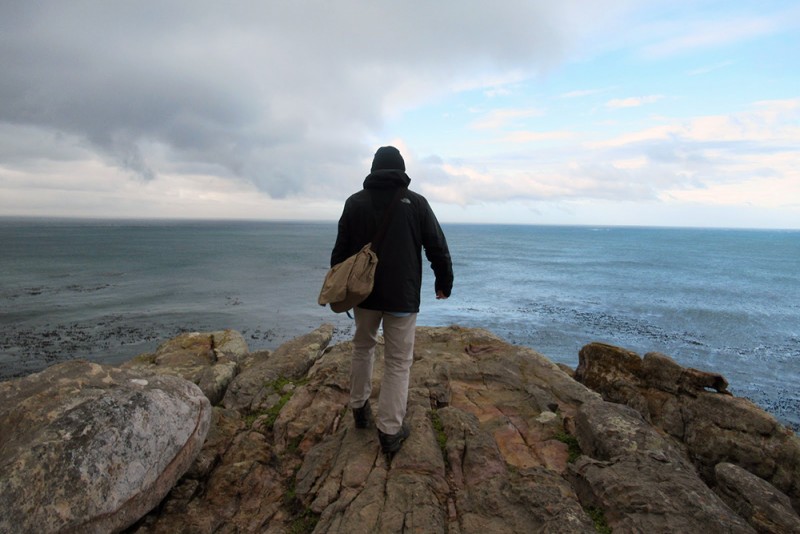 Image caption: On a weekend outing, Isaac Chen traveled to one of the southernmost parts of the African continent: the Cape of Good Hope.

Following a brief hiatus last year, the study abroad course was reinstated this year, to great enthusiasm from students. Isaac Chen, a rising sophomore neuroscience major, included a personal reference from a professor to stand out among the program applicants. He and rising junior Michelle Ondari worked with local interns at the Desmond Tutu Youth Centre designing programs and workshops for adolescents.

For Ondari, the experience of mentoring interns from the area revealed more similarities than differences.

"The interns were taken from the local community in Masiphumelele, a township similar to a slum," Ondari said. "The kids are taken to the Youth Centre if they show leadership qualities, and so we felt a connection. They're just looking for ways to be successful and to get ahead, and so it feels very similar to us and our goals."

"It was really cool to see how that affected their views on social issues, and how that parallels some of the things going on here at home," he said.

Been makin some new friends abroad

In addition to the course in Cape Town, the Public Health Studies program also offers a study abroad course in Uganda during Intersession that implements peer-to-peer learning, where two Johns Hopkins students team with a student from Makerere University to work on local issues. The reciprocal learning offered by both of these programs is extensive, said Lisa Folda, assistant director of Public Health Studies at Johns Hopkins.

"The real magic of these study abroad programs is the way they change how students see the work that they do, and the context surrounding it," Folda said. "The novelty of going to a faraway place serves as a catalyst, and what comes back with them is a different way of relating to their academics, their careers, and even to the city of Baltimore. The students who seek out these opportunities are looking to challenge themselves, and they are open to really new experiences. It gives them a fuller sense that whatever their cause is—whatever health outcome they're passionate about—they have to look at the social, political, and cultural context also to fully understand it."

After two back-to-back flights—nine hours from South Africa to the United Arab Emirates, then 14 hours to the U.S.—nine of the group returned to Homewood campus Monday. Despite the heat (Baltimore reached 92 degrees, whereas the temperatures in Cape Town had highs in the low 60s when they left), despite their exhaustion, and despite the prospect of hauling their travel gear back to their apartments and dormitories, the group seemed energized and giddy from their travels.

"It was such an amazing experience," said Ondari, trailing two rolling suitcases crammed with souvenirs.

"I would love to go back, maybe as a gap year before going to med school," added Mathur, leaning on his luggage in the shade.

Harris, who had pushed herself to the top of the mountain at Lion's Head, wasn't available for comment Monday: she's still in Africa, taking in as much of the continent as she can. 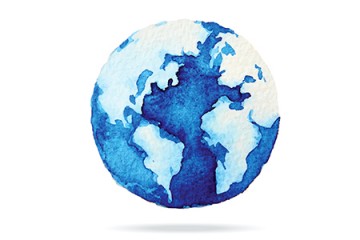 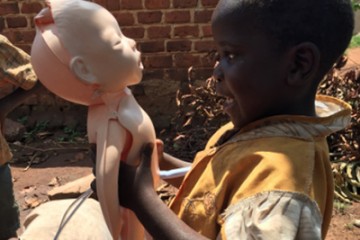 Designed to save lives