1970 JHU graduate was an independent financial consultant, member of Hopkins-Nanjing Center's advisory board, and a devoted Hopkins lacrosse fan

Russell Passarella, a member of the Johns Hopkins University Class of 1970 and the first person to serve in the position of young trustee on JHU's board of trustees, died July 8 in Tucson, Arizona. He was 69. 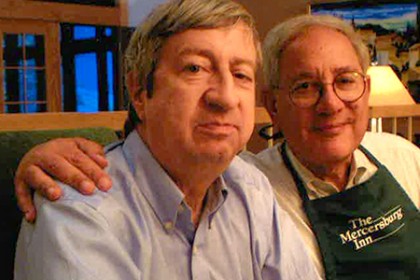 Born in 1948 in Milford, Connecticut—a self-described "Connecticut Yankee"—Passarella was an independent financial consultant, member of the advisory board for the Hopkins-Nanjing Center, and a devoted Hopkins lacrosse fan.

Milton S. Eisenhower—JHU's president from 1956 to 1967, and again from 1971 to 1972—knew Passarella as an outstanding undergraduate student, said Ross Jones, former vice president and secretary of the university. Eisenhower nominated Passarella to serve as the inaugural young alumni member of the board of trustees—a four-year, nonrenewable position Eisenhower negotiated when he temporarily returned to Johns Hopkins to serve as president. Passarella also served on the board's finance committee because he had a "special gift for understanding financial matters," Jones said.

The young trustee position, first created in 1971, was eliminated by the board in 2011 in favor of including a more diverse group of current students on the board's Student Life Committee.

Passarella had a long and distinguished career in international finance. He earned his MBA at Harvard Business School in 1972 and began working for the asset management firm Paine Webber. He then worked for the Chase Manhattan Bank, and when he left in 1998, he was the chief financial officer for global private banking and asset management.

His next position was in Hong Kong with American Express International, where he served from 1999 to 2001 as the chief financial officer in the Pacific Rim. He returned to the U.S. as CEO of a biomedical startup in Tucson before ending his career as an independent financial consultant.

As a Blue Jay, Passarella was president of the student council during his junior year and an organizer of the first MSE Symposium, in 1967. He was a brother of Alpha Delta Phi Fraternity and later served on its national advisory board.

"Russ was a great friend and great exemplar of what Johns Hopkins is," said Neil A. Grauer, assistant director of editorial services for Johns Hopkins Medicine.

Passarella sent Grauer detailed analyses of every Hopkins lacrosse game each season, Grauer said, demonstrating his knowledge of the team, players' stats, and their abilities. He also sent updates and analyses about all of Division I lacrosse.

Passarella told Charles Fax—a roommate of several years while at Johns Hopkins—that he wished for any donations in his memory to go to the Hopkins-Nanjing Center.