Student leaves behind poem for 'Woman with Sunglasses on Bench' sculpture

There have likely been plenty of "left-behinds" at Johns Hopkins University's Sheridan Libraries. As high-traffic areas for students, the occasional J-card or laptop cord could be unintentionally left at a desk or in a study room for its owner to retrieve later. 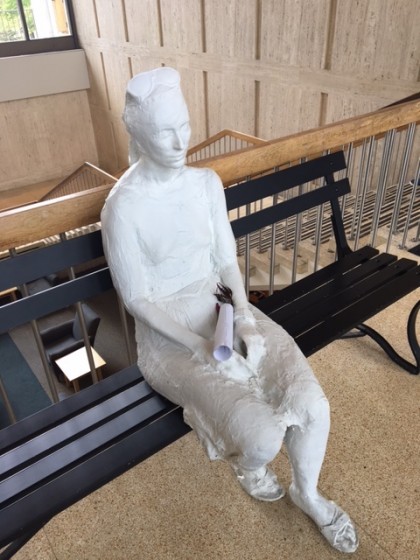 But Winston Tabb, Sheridan Dean of University Libraries and Museums, recently discovered a left-behind of a more intentional nature. In the cupped hands of Woman with Sunglasses on Bench—a sculpture that sits on the Q-Level of the Milton S. Eisenhower Library—Tabb found a poem left by a student.

"When I unfurled it and read the poem someone had left," he said, "I was quite moved—both by the sentiments expressed and at how important and iconic this welcoming figure has become since the Janis family made their gift in 2010."

The witty poem—which bears no title but is written in the sestina style, where the last word in each line is repeated in a specific order in subsequent stanzas—is an interpretation of the sculpture and students' experiences at the library. It was handwritten on plain pieces of paper that were taped together and rolled into a scroll. Although it was signed, the signature is difficult to decipher.

The Segal sculpture poem will be accessioned into JHU's Special Collections.

The full text of the poem is below:

Dearest Muse,
I do not invoke but address you,
For I wish to thank you for your watch
Over this humble (or not so) university library
Where thousands and I have spent hours in study.
Please accept this work.

O, I cry to passerby—have you seen her? Have you come inside? Have you
Paid a salute for a blessing on your work
From the Muse of the Milton S. Eisenhower Library?
There she sits by the door to the quad, a study
In worn marble on a plain iron bench. She keeps watch
Over all those who enter her domain. (They smile. Do I amuse?)

She wears a watch
And goggles pushed up into her hair—a practical Muse.
I imagine she has come fresh from diving, some study
Of fantastic ocean creatures or slowgrowing plankton—the steady work
Of science as it takes the world and me and you
Forward, sometimes through this library.

Students, teachers, passerby—there is so much to do in a good library.
Sometimes you can even get done your work.
More often you are caught in the endless flood of work, study,
Essay, friends, study, and the sun rises but not on D-level and you stare into dead space and muse
That somewhere out there is the world (you're bad at it) and friends (who all got this assignment done like competent people) and food (you don't recall the taste of strawberries, nor the sound of water, the touch of grass…) and you, in the dark, useless, last, you—
Rest. Restore. A library has comfortable chairs, and the Muse will keep watch.

There is merit, too, perhaps more in lighter study:
Humanity in its prime, learning and laughing as they amuse
Themselves and each other at their work.
In a word: people-watch!
Joining with near-stranger to work a project, emerging from the depths to unforeseen companionship, you
Will find no purer kinship than in a university library.

And what they build—oh, the works!
Endocrinal Effects of Neural Synapse Protease to Satanism in Dungeons & Dragons: A study;
Blueprints for a rocket, a solar shade, a perfect clockwork watch;
Essays and stories and poetry, the architecture itself for a whole new library—
For inspiration, above all, is the gift of a Muse.

Woman on a Bench in Sunglasses is by George Segal, an American painter and sculptor often associated with the Pop Art movement. The female figure is cast in bronze, white patina, and cast iron, and sits on an aluminum bench—one where community members are welcome to take a seat—just inside the entrance doors to the library from Keyser Quad.

Is it art or is it a bench?

The sculpture arrived via a gift from the Donna and Carroll Janis family. It is one of several major works of art that have arrived on JHU's Homewood campus in recent years thanks to a public art program that includes a review panel charged with selecting pieces. 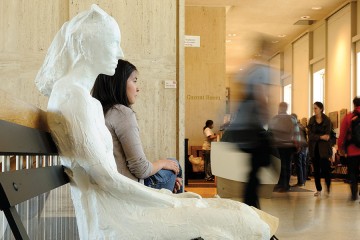