The Johns Hopkins Malaria Research Institute at the Bloomberg School of Public Health has been awarded a grant worth up to $10 million over seven years from the National Institute of Allergy and Infectious Diseases to accelerate the control and elimination of malaria.

The Johns Hopkins Malaria Research Institute grant has funded multidisciplinary malaria research in southern and northern Zambia as well as eastern Zimbabwe that has focused on how the disease spreads, how to control the mosquitoes that carry it, and how to attack the parasite that causes malaria. The new funding will expand the role of the institute into the Democratic Republic of Congo, which has a high incidence of malaria but where very little malaria control work has been done.

The Bloomberg School is one of seven International Centers of Excellence in Malaria Research around the world. The funding for the institute's Southern and Central Africa ICEMR follows on the heels of the original seven-year National Institutes of Health grant that has long facilitated collaboration among researchers from Johns Hopkins, Zambia, Zimbabwe, Democratic Republic of the Congo, and South Africa on the stubborn problem of malaria transmission.

"What's really powerful here is the fact that these integrated programs funded through the NIH ICEMRs can provide valuable information to guide control and elimination strategies for use all over the world—and now we will have the ability to continue this work for another seven years," says William Moss, a professor of epidemiology at the Bloomberg School and principal investigator of the Southern and Central Africa ICEMR. "The level of detail and understanding that can be garnered over 14 years is remarkable. Malaria is really complicated and it takes this kind of intensive, multidisciplinary work to understand it."

Despite significant progress in reducing malaria incidence and mortality, the World Health Organization estimates that in 2015, 212 million people developed malaria globally and 429,000 people died from it, most of them children under age 5 in Africa.

Moss says that researchers from JHMRI, working with researchers in Zambia and Zimbabwe, are finding that malaria's spread and the conditions that cause it are different depending on the region and local factors, painting a picture of different stages in the process of controlling and eliminating the disease.

In southern Zambia, for example, there has been a 95 percent reduction in pediatric hospitalizations for malaria in the past 15 years, but low-level transmission persists. Researchers are using advanced molecular genotyping to identify asymptomatic individuals who still carry the malaria parasite and may be spreading the disease to others. There are fewer mosquitoes that carry the parasite in this location, as a drought many years ago severely curtailed the mosquito population. However, other mosquito vectors are now being identified.

In eastern Zimbabwe, malaria disease burden dropped almost 40 percent in 2015 after the switch to a different insecticide, but GPS data shows that the population movement from neighboring Mozambique—where malaria is rampant—may be preventing further reductions in disease.

In northern Zambia, where the land is wetter and allows for more mosquitoes to thrive, transmission of malaria remains stubbornly high. The ICEMR team is currently evaluating the Ministry of Health's efforts to spray insecticide on the walls inside people's homes there, a strategy that has shown promise in other regions.

"We will build on the lessons from those locations and use what we have learned to begin our research in the Democratic Republic of Congo," Moss says. "It took us two years to set up the current sites for data collection. Now we will hit the ground running."

Adds Peter Agre, director of the JHMRI and a 2003 Nobel Laureate in chemistry: "The ICEMR programs have provided major advances in following malaria worldwide. A global pandemic, malaria does not respect national boundaries. I am proud of Dr. Moss and his colleagues at Johns Hopkins and their partners in Africa for their leadership in this valiant effort."

JHMRI was founded at the Bloomberg School in 2001 with a $100 million gift from the Bloomberg Philanthropies for a state-of-the-art research facility for a broad program of basic-science research to treat and control malaria, investigate vaccines, and find new drug targets to prevent and cure this deadly disease. The philanthropies have since given another $25 million to JHMRI. 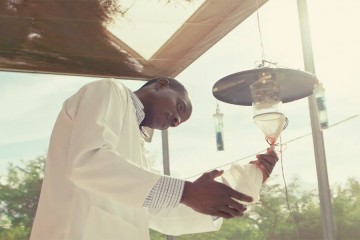 Published April 25, 2017 Video
A vaccine is urgently needed to prevent malaria, which affects hundreds of millions around the world every year