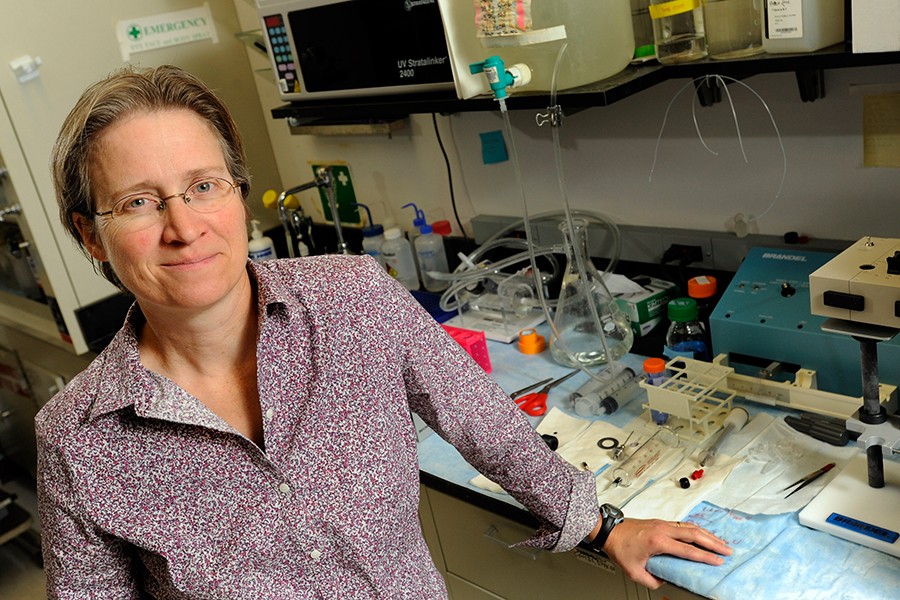 Rachel Green has an unusually specific passion: the ribosome.

The biologist and geneticist has been researching the cellular structure for nearly three decades now, fascinated by the bridge it forms between the ancient and modern worlds. The laboratory she heads at Johns Hopkins, The Green Lab, is devoted to this complex macromolecular machine, investigating and manipulating its roles in protein expression.

It's hands-on research that digs into the most fundamental principles of science—exactly the kind of work, Green says, that can break through to "great discoveries and important medicine."

With her new appointment as a Bloomberg Distinguished Professor, Green has the opportunity to go deeper with this research, initiating new projects and exploring the latest technologies in her field.

Along with continued support from the Howard Hughes Medical Institute, the professorship elevates Green's work at Johns Hopkins with the School of Medicine and establishes new connections to the Department of Biology.

"A world-class scientist, Dr. Green has long been an outstanding citizen of Johns Hopkins," says Sunil Kumar, the university's provost and senior vice president for academic affairs. "With her new appointment as a Bloomberg Distinguished Professor, we look forward to her expertise being shared with faculty and students across the university."

Green first arrived at Johns Hopkins in 1998, joining the Department of Molecular Biology and Genetics.

"This is a storied department; it's had lots of heroes in it," she says of the decision both she and her husband, fellow geneticist Brendan Cormack, made back then to settle in at the university. The couple now lives in Roland Park with their three children.

Finding her way to this field, Green says, was the result of a "happy set of good choices" that ultimately placed her alongside some of the top minds in biochemistry.

Green grew up outside Cleveland, where her mother's work as a chemistry teacher instilled in her a love of science. Initially her own skills in math and science seemed to lead her toward engineering, but that direction changed after she worked in a biochemistry lab during her junior year at the University of Michigan.

Green headed next for graduate studies at Harvard University, at a groundbreaking time for RNA studies. She worked in the lab of Jack Szostak, who was focused on replicating the elements of "the RNA World"—the primordial environment in which scientists believe early forms of life may have relied solely on RNA to store genetic information and catalyze chemical reactions.

From there, Green says, "I wanted to continue studying RNA, and studying the origins of life."

That led her to the ribosome. While working in the lab of Harry Noller for her postdoctoral fellowship at the University of California, Santa Cruz, she investigated the ribosome's role at the crossroads between the ancient and modern worlds, translating RNA messages into protein.

Both Szostak and Noller were pivotal mentors, Green notes.

Since arriving at Hopkins, Green's research has focused on the ribosome's role in translating the genetic information found in all cells. Initially, her work investigated the most fundamental aspects of ribosome function in the bacterial ribosome. More recently, she has focused on quality control steps imposed on the translational process in eukaryotes.

These areas of research are of critical importance for understanding the natural world and for their medical relevance, Green says. For example, her work on ribosome rescue and homeostasis sheds light on certain blood disorders and genetic diseases that include premature "stop" signals in the coding information.

As a Bloomberg Distinguished Professor, Green takes her place among an interdisciplinary cohort of scholars at Johns Hopkins who are working to address major world problems and teach the next generation. The program is backed by a $350 million gift from Johns Hopkins alumnus, philanthropist, and three-term New York City Mayor Michael R. Bloomberg.

"Dr. Green exemplifies the best of Johns Hopkins, as a leader in her field of ribosome biology and a professor who inspires our next generation of scientists," says Paul Rothman, dean of medical faculty at the School of Medicine. "We're excited to see what new directions she'll take with the Bloomberg professorship."

In addition to continuing her work with the School of Medicine, Green's appointment creates new teaching responsibilities in the Biology Department of the Krieger School of Arts and Sciences.

"We very much look forward to having Dr. Green join our faculty," said Krieger School Dean Beverly Wendland. "Her important work in ribosome biochemistry will be a strong complement to current research projects already underway at the Krieger School—this appointment emphasizes the synergies that are possible across two schools of the university. I am especially pleased that Dr. Green, a former Johns Hopkins Medicine Teacher of the Year, will be teaching classes in our Department of Biology and sharing her expertise with our students."