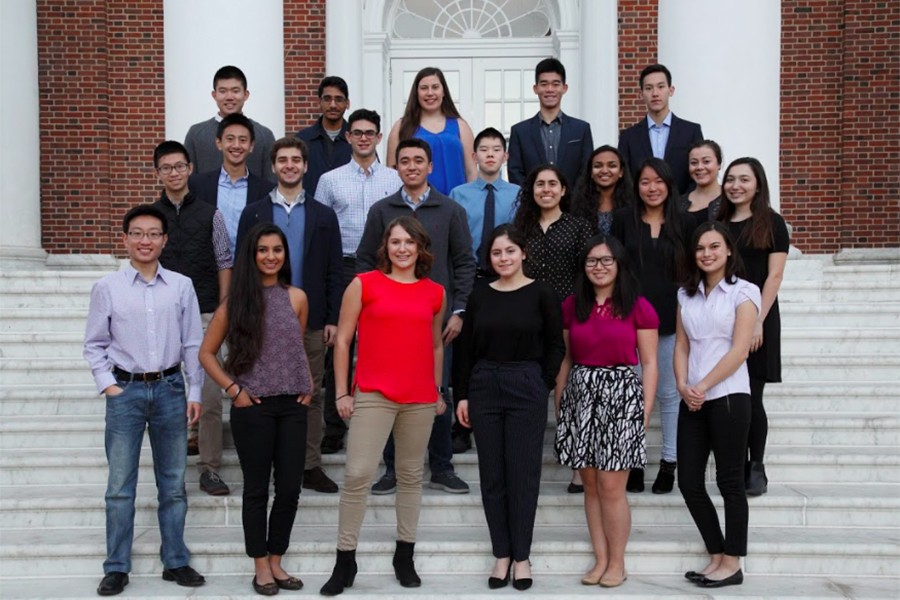 Image caption: Members of the student chapter of TCO Labs

A team of sophomores wants to build an entrepreneurial ecosystem among undergrads at Johns Hopkins, and these business-minded Blue Jays have hatched up a plan to make it happen.

Hatch 2017 is a public startup conference on the university's Homewood campus that will bring together students, alumni, community members, and local business leaders for an afternoon of presentations, workshops, and networking. More than 250 participants have already registered for the free event, which takes place in Hodson Hall on Saturday, April 15, at 1 p.m.

Students at the heart of Hatch say the conference aims to build the network of entrepreneurs they found to be missing from Hopkins when they arrived.

"It's hard to convince students to go into entrepreneurship, because it's not a clear-cut path the way finance or consulting is. It's important that students see that their peers have done it before."
Pava LaPere
TCO Labs president

"When we came to campus, we realized that the entrepreneurial enterprise was a little bit decentralized," says Anthony Garay, a computer engineering major with a minor in entrepreneurship and management. "We thought, why not create an organization that unifies all these groups and say 'Let's make entrepreneurship prevalent at Hopkins'?"

So Garay helped found the nonprofit TCO Labs, where he now serves as chief executive. With 26 undergrads in the student chapter, seven student executive committee members, and an eight-member board of directors that includes alumni and Baltimore-based entrepreneurs, TCO Labs has positioned itself as an umbrella group managing a robust range of programs in addition to the Hatch conference.

Their nonprofit model ensures that the entrepreneurial spirit at Hopkins endures even after the current student members have graduated, says Brooke Stephanian, a biomedical engineering major and TCO Labs' innovation officer.

Pava LaPere, TCO Labs' president and a computer science major with a minor in entrepreneurship and management, says the Johns Hopkins administration has been a key supporter of the group's efforts. But she adds that not having students at the helm would be "like a startup creating a project for a target audience they've never talked to."

"We have an intimate understanding of the struggles of students who want to be entrepreneurs, because we've lived that," she says.

In that spirit, Hatch 2017 has a special emphasis on the work of alumni and current students.

"It's hard to convince students to go into entrepreneurship, because it's not a clear-cut path the way finance or consulting is," LaPere says. "It's important that students see that their peers have done it before. By showcasing these entrepreneurs—both those who are still students and those who have graduated—Hopkins students can see them as role models for success."

The alumni-led workshops delivered at Hatch 2017 will be "The Legal Side of Startups" led by Jacob Byrne, and "Creating a Magnetized Culture" with Chris Steer. Regional innovator Startup Maryland will deliver a third workshop about angel investing.

The venue for Hatch 2017 has changed from Mudd Hall to Hodson Hall. Registration for the event will be open through Saturday.