He plans to launch project to showcase unique arts, history, culture of Baltimore 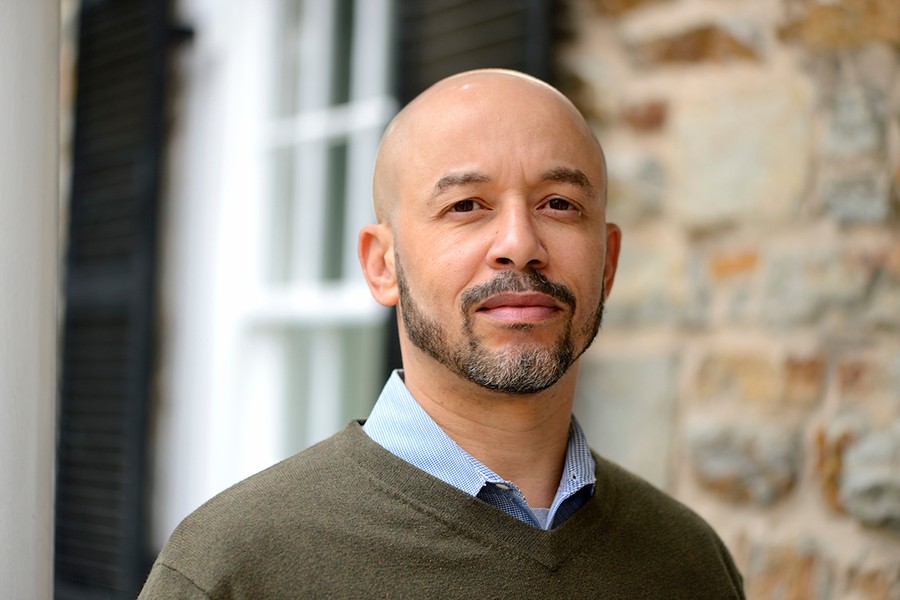 Beyond the emotional resonance of Baltimore—Jackson grew up here, still has family here, and has written frequently about the city—there's the academic proximity to the roots of many research topics that intrigue him, including the histories of Billie Holiday and Frederick Douglass.

"There is no better location than where we are to explore the figures I'm interested in in 20th-century history," says Jackson, who is known for his extensive scholarship on African-American literature and culture, including a biography of Ralph Ellison and a narrative history of mid-century writers. He's set to publish another biography, focusing on writer Chester Himes, this summer.

"There is no better location than where we are to explore the figures I'm interested in in 20th-century history."
Lawrence Jackson
Bloomberg Distinguished Professor

After 14 years teaching at Emory University in Atlanta, another compelling motive for Jackson to take on his new role as a Bloomberg Distinguished Professor was the chance to leverage the resources of a prominent institution like Johns Hopkins to help enrich his own hometown.

Jackson is in the process of launching a new project designed to preserve and showcase the unique arts, history, and culture of Baltimore City. The project, set to operate through JHU's Center for Africana Studies beginning in 2018, will focus on these assets as "tools of liberation" and with special attention to "structural foundations of racism and inequality," he says.

Beyond an archival purpose to protect artifacts of African-American culture and politics, it will host regular events to connect the intellectual life of Johns Hopkins with established Baltimore cultural institutions and neighborhoods. Potential offerings could include seminars at historic black churches and city libraries, and outreach programs with local high schools.

Jackson also hopes to establish an annual free music festival at Lafayette Square, honoring the area's jazz legacy and that of Holiday, a one-time Baltimore resident.

Jackson believes events like the 2015 unrest in the aftermath of the death of Freddie Gray confirm the need for just such an intellectual hub here. In a proposal for the project, he writes that the "record levels of poverty and alienation" in modern-day Baltimore belie the city's rich history—as "the nest for Frederick Douglass's freedom leap in 1838, the hub of the largest free antebellum black community, and the heart of a large urban black commercial class in the 20th century."

Such topics commanded Jackson's focus even while he lived at a distance in Atlanta. As the Winship Distinguished Research Professor at Emory, he steered a course examining the historical forces behind the unrest in his hometown, including mass incarceration, housing segregation, and disparities in health care and education. The class culminated in a trip for students to Baltimore, where they shared their research at the Enoch Pratt library on Pennsylvania Avenue, Renaissance Academy High School, and St. James' Episcopal Church.

Jackson also reflected on the unrest through a personal essay last year in Harper's: "The City That Bleeds: Freddie Gray and the Makings of an American Uprising." Years earlier, for N+1 magazine, he'd written a piercing account of returning to Baltimore for the funeral of an old friend.

Jackson grew up in Baltimore's Arlington neighborhood, near Ashburton, with his father directing the Druid Hill YMCA and his mother working for Baltimore County. He attended Loyola-Blakefield High School in Towson, then immersed himself in a liberal arts curriculum at Wesleyan University, and went on to earn a masters at Ohio State and a PhD in English and American Literature at Stanford.

For his first job as a professor, he returned to Baltimore—he lived in his grandmother's home on Pimlico Road—and commuted to Howard University in D.C. It was important for him, he says, "to have a strong intellectual career at a historically black university."

Today, Jackson has established a formidable reputation for his work chronicling African-American literary history. His 2010 book, The Indignant Generation: A Narrative History of African American Writers and Critics, charts consequential mid-century figures such as Richard Wright, Harold Cruse, and Gwendolyn Brooks within the drama of the civil rights movement. It won Jackson several national honors, including the Black Caucus of the American Library Association prize for non-fiction. The expansive narrative followed Jackson's more focused examination of Ralph Ellison in his 2002 biography of the young writer's rise.

He turned more personal for his 2012 book, My Father's Name: A Black Virginia Family After the Civil War. To construct the memoir, Jackson waded through archives to trace his ancestry back to his grandfather's grandfather, a man born or sold into slavery who later purchased 40 acres.

"Dr. Jackson's appointment strengthens these two great departments and enhances a burgeoning area of scholarly inquiry within our community," says Sunil Kumar, provost and senior vice president for academic affairs at Johns Hopkins. "We are thrilled he has returned to Baltimore to make Johns Hopkins his academic home."

This semester, Jackson is teaching an English graduate seminar, "Mapping Frederick Douglass' Escape," which explores the abolitionist leader's time in Baltimore and on the Eastern Shore; as well as an Africana Studies undergraduate course "Clint Eastwood, Race, and the American Western."

"As an innovative, conscientious scholar and biographer, Professor Jackson has recast the study of modern African-American literature and culture," says Beverly Wendland, dean of the Krieger School. "We expect that his new role at Hopkins will only broaden his influence. Beyond that, we look forward to the exciting programs he plans for the university to engage more meaningfully with the city of Baltimore."

An earlier version of this article mischaracterized Jackson's project designed to preserve and showcase the unique arts, history, and culture of Baltimore. It is not an institute. The Hub regrets the error.