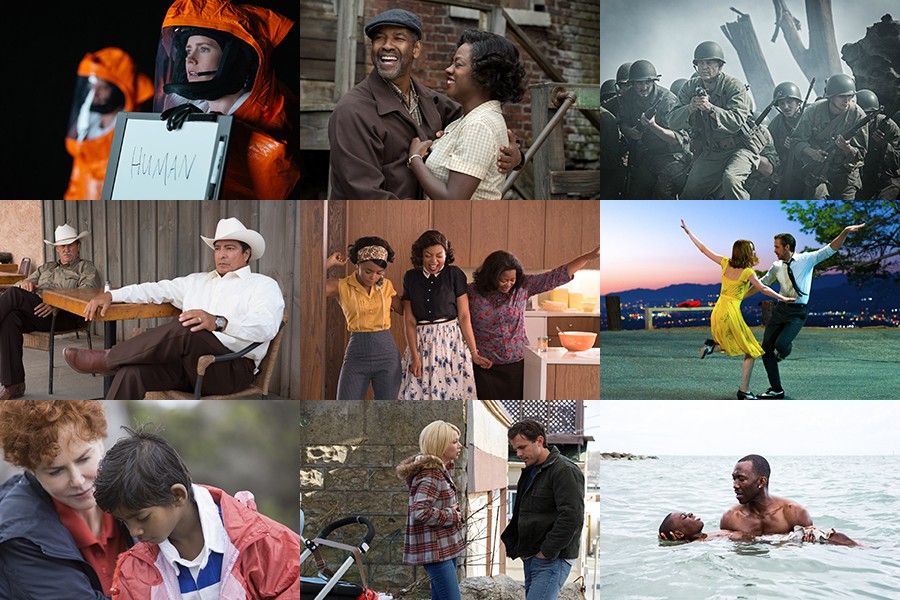 A musical. A family drama. A coming of age story examining race and sexual identity in Miami. A war film. An adaptation of a Pulitzer Prize-winning play. An alien arrival.

The 2017 Academy Award nominees, announced earlier this morning, represent a more racially diverse cross section of Hollywood filmmaking than in recent years, and mark rare comebacks—not only for polarizing individuals, but for genres as well.

The Hub caught up with Linda DeLibero, director of the Program in Film and Media Studies at Johns Hopkins University, for her take on this year's Oscar nominees, standout performances, and diversity in filmmaking.

What were some of the best performances you saw this year?

For me, Casey Affleck's performance in Manchester by the Sea is unable to be topped. But he's got a lot of personal background that might prevent him from getting the Oscar—he had a sexual harassment suit that he settled with a couple of women on the set of the documentary he made with Joaquin Phoenix. It was a few years ago, but it started to come up when he started campaigning for the Oscars.

I don't know if it's going to be a factor, I just think that of all the performances this year or any year—it's just a great performance. And I don't see that any of the others can really match it. And the material is the perfect material for him; it's a brilliant screenplay. And that would be my choice.

I really felt this year that the three best films, by far, were Manchester, Moonlight, and Hell or High Water, and I very seriously doubt any of them will win. I think it's going to go to La La Land.

What makes you think that?

The fact that Hollywood people love to see movies about themselves. (Laughs.)

You know, it's an upbeat film, and it's a little bit daring in its execution. Damien Chazelle is doing something a little bit different by bringing back the musical in a way that's palatable to wide audiences. I think people who don't traditionally like musicals can accept this. It has two great stars with lots of chemistry, and despite the fact that it's bittersweet, it's also quite uplifting.

I think a lot of people are very much in the mood right now for a distraction. And that certainly isn't true for Manchester, and it sort of isn't true for Moonlight, and I think Hell or High Water is dark, but it does have a redemptive ending, and I would be happy if any of those three movies won, but I don't think it's going to happen.

Were there any major snubs?

I think a lot of people were hoping that Jackie was going to get a Best Picture nod, and the big surprise that people were guessing and wondering about was Hacksaw Ridge and Mel Gibson, if they would give him the nod, which they clearly did, and if it would signal some sort of forgiveness for Mel Gibson. And who knows? I didn't see Hacksaw Ridge so I can't really judge. Clearly there are people in Hollywood who are ready to say "Come back, Mel Gibson, come back into the fold." For better or worse.

What were some surprises?

I was surprised that they really shut out Martin Scorsese this year for Silence. That was a big surprise and would've been on my list. But then again, every year, there are a lot of films that would be on my list that don't get onto the Oscar list.

In the Best Actress category, it's interesting that Isabelle Huppert (Elle) seems to have knocked out Amy Adams (Arrival), and I think a lot of people were surprised that she did not get a nod. Or Annette Bening (20th Century Women). So we have a French actress who I think many people will see as taking the spot that rightfully belongs to an American actress. Who knows.

And I think the biggest buzz will be the fact that the whole #OscarsSoWhite campaign and the reorganization of the Academy, for all appearances from this list, looks like it has been addressed. I would say to take that with caution, because I think it's good to remember that films like Fences and Moonlight were already in the pipeline last year, and sometimes I think it's just the luck of the draw. I don't know that there's been a big change of heart and turnaround in Hollywood. Change doesn't happen very quickly in that institution.

I hope it's a trend that continues, but that's going to depend on whether the doors are really opening for more projects by black writers and directors. I think it's happening and will continue, but I'm never sure if it's just because the members of the Academy have had a change of heart, or if it's just the luck of the draw, because most of the Academy members are still white men.

I think things have been turning around, but we've seen that trend before in Hollywood, where it looks as if a whole spate of Oscar-contending projects come out of minority figures in Hollywood. I would say that we're still not seeing much recognition of Latino or Asian-American projects, so the diversity is pretty limited. But I'm hoping that there is the money and that will to allow for everyone who wants to make a good film to do so. It's really very tricky, and on the surface, trends can look a certain way, but next year you might be back to square one.