His parents met in the 1950s. Dad was a graduate of Meharry Medical College in Nashville, Tennessee; mom was attending nearby Fisk University with hopes to "enhance her opportunities in life," or marry a doctor.

The couple had a son, Robert. They moved back to their hometown, Charleston, South Carolina, to start one of the first family medical practices there. 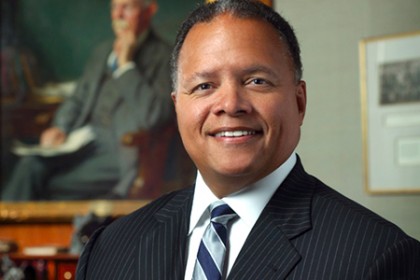 A few years later, a car crash left Robert Higgins, his mother, and two younger brothers alone. His late father did not have life insurance because, Higgins says, "he was going to live forever."

"At an early age we learned that life is a series of hurdles that can and must be navigated," says Higgins, who will serve as the keynote speaker at Johns Hopkins' 35th Martin Luther King Jr. Commemoration on Friday. "My mom's perspective was, 'We have gained so much through this loss; God has blessed us.'"

Higgins' mother and grandparents held him to high academic standards.

He received a bachelor's degree from Dartmouth College, where he also played on the school's football team; a medical degree from Yale School of Medicine; and a master's degree in health services administration from Virginia Commonwealth University. Higgins also served as a major in the U.S. Army Reserve Medical Corps.

All of this in pursuit of a father's unfinished dream.

"I'm not sure I truly understood or embraced the importance of the opportunities that were provided for me or my brothers," Higgins says.

Higgins, who joined Johns Hopkins in 2015 from The Ohio State University, serves as the surgeon-in-chief of The Johns Hopkins Hospital and director of the Department of Surgery for the Johns Hopkins School of Medicine. He is the hospital's first black department head.

He established an endowed memorial lectureship in honor of Levi Watkins Jr., founder of the MLK commemoration event and the first African-American chief resident in cardiac surgery at Johns Hopkins. Watkins died in April 2015 at 70.

The Hub spoke to Higgins about the upcoming commemoration event, Watkins' legacy, and his own aspirations as a minority in the medical field.

What inspired you to establish an endowed memorial lectureship in honor of Levi Watkins Jr.?

Levi was a special man. He was the first African-American to be admitted and to graduate from Vanderbilt School of Medicine. He went on to become the first African-American chief resident in cardiac surgery at Johns Hopkins. In February of 1980, Dr. Watkins implanted the world's first human automatic implantable defibrillator blazing the trail, as was his style, to medical innovations that have saved millions of lives.

Beyond his groundbreaking medical innovations, Dr. Watkins' contributions to Johns Hopkins School of Medicine and the university were legendary from the time when he joined the medical school admissions committee raising awareness of the importance of a diverse student body, leading to enhancements in under-represented minority representation at Hopkins. He was an extraordinarily influential mentor of the faculty, as an associate dean of the School of Medicine, until his untimely death.

He was, in many people's estimation, a moral and ethical compass for Hopkins and Baltimore—and since his death, his impact and influence has been sorely missed. I thought we should remember his contributions every year. I feel blessed to be following in the footsteps of someone who broke important barriers in academic environments like Hopkins. It's almost as if the baton has been passed—not to just me, but to all of us.

You broke a glass ceiling by becoming the first black head of a department at Johns Hopkins. Have you encountered resistance, and if so, how did you respond?

I'm always challenged to be on top of my game … always have to prove that I belong in this academic world. But that's OK. It's part of being a successful leader. As my mom says, "pressure makes diamonds."

How does Dr. Martin Luther King Jr.'s legacy relate to your desire to build a physician workforce that mirrors the country's racial and ethnic diversity?

The MLK commemoration event was launched by Levi Watkins in 1982 to honor the man who was his pastor and mentor while he grew up in segregated Montgomery, Alabama. Among Dr. King's legacy is his interest and focus on health care disparities: "Of all the forms of inequality, injustice in health care is the most shocking and inhumane."

The solution to these disparities requires the next generation of medical and surgical leaders to step up and make a difference. We have to recruit and nurture health care providers who resemble those most deeply affected by health care disparities. Racial inclusion and ethnic diversity are critically important.

The surgical disciplines have the greatest distance to travel in this regard. The torch will be passed to those who care and recognize the importance of the task.

The theme of this year's commemoration is "Moving forward together." How do we do this during a time when the nation seems immensely divided?

I am hopeful that as we move forward together, academic leaders here and in other [institutions] will provide the support and resources to give power to our voices and a platform to those who can't be heard in addressing existing barriers and obstacles to fair and equitable treatment of all in our environment, our school, and our community.

Martin Luther King Jr. Day is not only about celebration and remembrance, education and tributes, but above all about a day of service. We have to move beyond the divisive forces in the current world to move forward in a positive manner. It's a very tall task but one that I hope we can navigate. 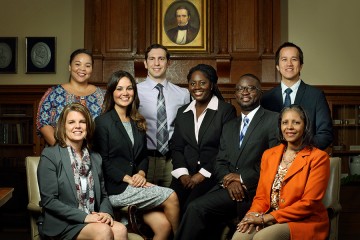 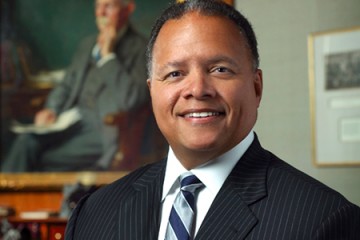 Published Jan 12, 2017
JHH surgeon-in-chief to give keynote speech on 'Moving forward together'