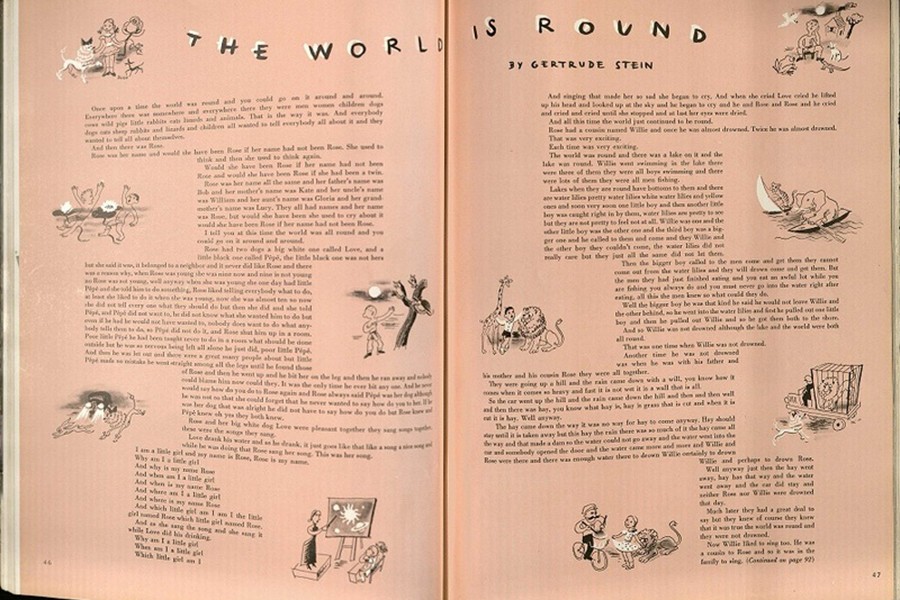 Image caption: Excerpt from Gertrude Stein's The World Is Round, which appeared in Harper’s Bazaar in June 1939 and included illustrations by Clement Hurt

Robert A. Wilson, a class of 1943 Johns Hopkins alumnus who distinguished himself as a book seller and collector, died Nov. 29. He was 94.

From 1959 through 1988, Wilson owned and operated the storied Phoenix Book Shop in New York City's Greenwich Village, which—as his The New York Times obituary notes—became a "sanctuary for new poetry, an important trading post for first editions and a hangout for his, and his customers', literary idols." 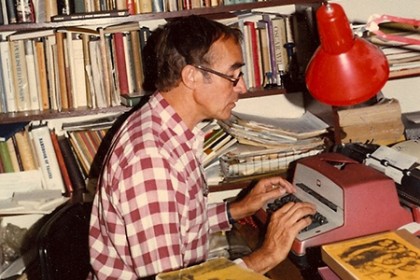 Image caption: Robert Wilson in the Phoenix Bookshop in 1979

Gabrielle Dean, curator of rare books and manuscripts at the Johns Hopkins Sheridan Libraries, got to know Wilson when he donated his own papers to the library. He also guided—and sold books to—other collectors of works by H. L. Mencken and Gertrude Stein, which were eventually acquired by the library. As a bookseller, Wilson independently started putting together bibliographies for Ezra Pound, Gertrude Stein, and Gregory Corso during an era when tracking down early editions wasn't as simple as keyword searching eBay.

"He was a model of old-fashioned, hands-on scholarship," said Dean, adding that Wilson used these skills to build his own collections, which included Stein ephemera, books, and manuscripts. "He pored over catalogs, contacted other collectors. Things would be brought to his attention as a bookseller, but he still had to do a lot of traditional research to figure out what an item was and how it fit into the writer's overall production. It was a labor of love. His own collections of first and early editions of these authors' works helped him write some of the standard bibliographies of their work, including the first complete bibliography of Stein."

The Baltimore Sun's obituary notes that Wilson told his niece his Stein collection is one of the biggest in the country. Dean notes that while both Yale University's Beinecke Rare Book and Manuscript Library and the University of Texas' Harry Ransom Center have significant Stein collections, Wilson's Stein collection—which the Sheridan Libraries have an agreement to acquire—has a uniquely omnivorous scope.

"Like many bibliographers, he was interested in Stein's early writings, the ones that were published in strange little imprints and modernist small presses," Dean said, adding that Wilson's collection also includes manuscripts and letters. "He was very particular about the way he collected Stein. For every book that she had published in her lifetime, he got a copy that she inscribed to someone in her circle."

Robert A. Wilson, whose bookshop was a poets' sanctuary, dies

"Robert A. Wilson and the Phoenix Bookshop"

Wilson's Stein collection also contains anthologies in which she was included; her publications in magazines and newspapers, including articles about her; works of fiction in which Stein is mentioned; translations of her works; Stein biographies; biographies and autobiographies of her contemporaries; exhibition catalogs that make reference to her; scores and plays that were written about her work or in reference to her life; and popular culture ephemera, such as Stein paper dolls, children's books, calendars, mugs, T-shirts, posters, playing cards, and even a Stein pillow.

"She wrote a children's book called The World is Round, illustrated by Clement Hurd," Dean said. "Robert was thorough. He collected not only the first edition of the book but a magazine article about it, a game based on the book, and even an address book with Hurd's illustrations. He acquired all kinds of things that are great evidence of the popular impression that Stein made throughout the 20th and early 21st century."

Wilson wrote two books, Seeing Shelley Plain: Memories of New York's Legendary Phoenix Book Shop and his Modern Book Collecting guide. He also started a small press, simply titled Phoenix Book Shop, through which he printed short chapbooks around Christmastime as holiday greetings and sent them to family and friends. They might be an unpublished piece by one of the authors he knew and worked with through the bookstore. A few he wrote himself.

"One was called 'Tea with Alice' and it was the result of a chance encounter with Alice B. Toklas on an airplane," Dean said. "They chatted, and by the end of the flight he had been invited to tea. So he went, which, I'm sure, was a dream come true for him … and being Robert, he turned the visit into a book."