Next U.S. president must confront growing threat of a nuclear North Korea

North Korea is closer than ever to developing long-range nuclear missile capabilities, and the nation's dictator, Kim Jong-Un, is a growing threat on the global stage, writes John McLaughlin in a recent editorial for OZY, an online news outlet.

McLaughlin, a distinguished practitioner in residence at the Johns Hopkins School for Advanced International Studies and the former acting director of the CIA, explains why North Korea poses such a serious risk.

"Until a few years ago, I would have described the North as episodically dangerous but manageable," McLaughlin writes. "In the last few years, though, a series of events and developments has moved the isolated state up near the top of the U.S. 'nightmare list.' First, the North's ability to project military power far beyond its borders has grown, dangerously. Second, its leader is not just implacably hostile to the United States—he is also much more volatile and unpredictable than his predecessors."

North Korea's military power has grown substantially. Twice in recent years, McLaughlin notes, North Korea has successfully launched a satellite into space with the use of multi-stage rockets—a capability critical to the development of the kind of rocket that can carry a nuclear weapon across the Pacific Ocean to the U.S. Additionally, McLaughlin says, there is evidence that North Korea's nuclear arsenal is growing.

The next U.S. president will have to decide how to neutralize a nuclear threat from North Korea. McLaughlin describes four potential courses of action—tougher sanctions, negotiations, nuclear deterrence, and military intervention—all of which come with risk and the potential for unintended consequences. 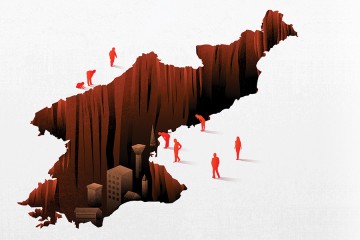