Robinson, who retired in 1993, was a founding member of Department of Biomedical Engineering

David A. Robinson, a founding member of Johns Hopkins University's Department of Biomedical Engineering and distinguished service professor emeritus of ophthalmology, biomedical engineering, and neuroscience, died on Oct. 18. He was 92. 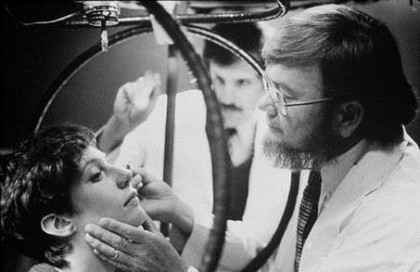 Robinson, who retired in 1993, studied electrical engineering at Johns Hopkins and received his master's and PhD degrees in 1956 and 1959, respectively. He joined the Johns Hopkins University School of Medicine faculty as an instructor in 1961 and was named an assistant professor of biomedical engineering in 1966. In 1965, Robinson published a groundbreaking paper in the Journal of Physiology that is still considered to be the most comprehensive and thorough investigation of the mechanics of eye movements.   Robinson, named a full professor in the Department of Ophthalmology in 1975, developed a magnetic field search coil technique that remains today as the standard for recording eye movements in both basic and clinical eye movement laboratories.  He was the first researcher to simultaneously record eye movements and activity of ocular motor neurons from fully alert behaving primates. The results produced the mathematical relationship known as the pulse-step of innervation.

He predicted the necessity of a central neural network that holds positions of gaze—the ocular motor neural integrator—and discovered the anatomical location of the integrator. He also developed a concept for how the brain generates saccadic eye movements that has served as the foundation for subsequent saccades discoveries.

"His research continues to inspire so many of us and remains one of the best existing examples of the utility of neural engineering and computational modeling in furthering our understanding of the brain."
Kathleen Cullen, JHU professor of biomedical engineering

In addition, Robinson made critical discoveries about learning and plasticity in the ocular motor and vestibular systems, especially with reference to the importance of the cerebellum, and he developed the first comprehensive model of the coordinated actions of the six ocular muscles and applied it to the problem of strabismus.

"Dr. Robinson is perhaps most famous for developing and using mathematical models to understand how the brain controls eye movement in health and how things go wrong in disease," said Reza Shadmehr, a professor of biomedical engineering and neuroscience and director of the Laboratory for Computational Motor Control. "His models are arguably the most successful example of computational systems neuroscience today."

Added Kathleen Cullen, a professor of biomedical engineering: "Dave's work effectively sparked a new wave of quantitative studies focused on the neural circuits that control and calibrate movement. His research continues to inspire so many of us and remains one of the best existing examples of the utility of neural engineering and computational modeling in furthering our understanding of the brain."

Robinson retired in 1993 after being honored at the Fourth Annual Wilmer Research Meeting.

A  memorial service will be held at 10 a.m. on Friday, Oct. 28, at the Peaceful Alternatives Funeral and Cremation Center in Timonium, Maryland.