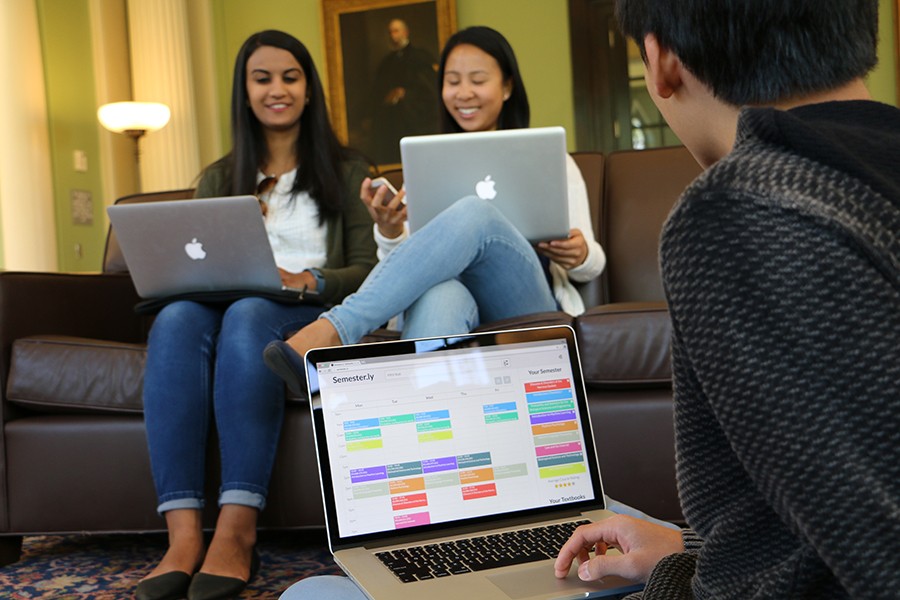 Two summers ago, after wrapping up a Google internship, Noah Presler started working on a new web project with a couple of his friends from Silicon Valley.

The idea, which they dubbed Semester.ly, was to simplify a process they all found tiresome: registering for university classes. They imagined a format that could be more visual, more personalized, and more social. 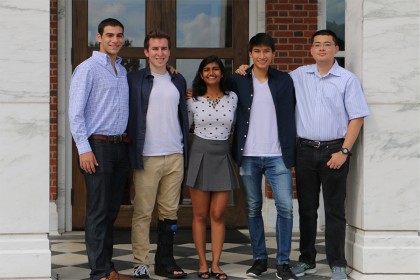 By October 2015, the trio thought their product was mature enough to introduce at Presler's home base at Johns Hopkins University.

"We decided it would be fun to just go ahead and market it," recalls Presler, now a senior computer science major at JHU. "One night, we spun together a Facebook page and pushed it out."

By the end of that week, they had more than 4,500 users as word of Semester.ly spread through social media.

A year later, Semester.ly can now count more than 26,000 users across three universities. At Johns Hopkins, more than 60 percent of this year's freshman class used the platform to organize their fall semesters while getting acquainted with some of their fellow classmates in the meantime.

Presler, who initially conceived of the idea in collaboration with University of Toronto students Rohan Das and Felix Zhu, helped refine the platform over the past year with a team of five other Johns Hopkins computer science majors.

The team got a boost from the Ralph O'Connor Undergraduate Entrepreneurship Fund, which supports Johns Hopkins undergraduate entrepreneurs and is currently accepting applications through Oct. 31. Through this program, Johns Hopkins Technology Ventures provided Semester.ly with a total of $10,000 from two rounds of grant funding.

In addition to Hopkins, Semester.ly is now available at two schools in Ontario—the University of Toronto and Queens University—and is launching this week at Vanderbilt University. The team plans to add the University of Maryland soon and envisions fanning out to more schools in coming months. 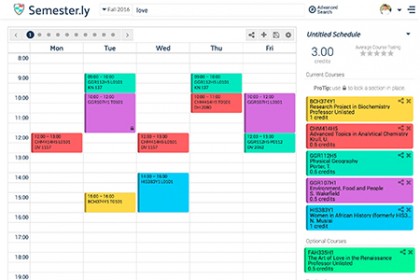 Semester.ly's backbone is its color-coded scheduler, which allows users to go deep into customizing their semester. Students can search based on a variety of parameters—for example, fulfilling the writing requirement, finding schedules with long weekends, or working around a part-time job—to visualize different options for timetables.

On top of that, Semester.ly makes the process social. Students can see which of their peers are signing up for which classes, or share their proposed schedules on Facebook. And in addition to seeing official university course evaluations, students can also review classes on their own using an emoji scale, like a burning flame for "Must Take."

Through a partnership with Amazon, Semester.ly also lets users see and directly buy the textbooks they'll need for different courses.

That's just the start of it, really. Presler says his team is in the midst of rolling out a few new features to make Semester.ly more collaborative and social. For example, there's now a search that provides more information on specific professors, and a notification that alerts users in advance of scheduling issues. The team also just launched a day calendar for mobile devices that allows users to easily see their agenda for the day.

Thirteen reasons why Semester.ly will save your life during course registration

At Johns Hopkins, Semester.ly works to complement the existing Student Information System—at the end of their scheduling process, students still use the latter system for official course registration. The context may be a little different at different universities, but the data can blend seamlessly with Semester.ly's platform, Presler says.

Presler, who has a job waiting for him at Google once he graduates, says Semester.ly "was a big project to have built in a year," and there's more work ahead for his team.

"The part of Semester.ly I'm most proud of is this amazing group we've built around the cause," he says.

The Johns Hopkins team of computer science majors who collaborated with Presler on Semester.ly includes senior Max Yeo, the front-end lead who has previously interned at Pandora; senior Eric Calder, the databases and analytics lead who has interned at Microsoft, Dell, and Epic; senior Michael Miller, who joined the team recently to develop new technology for rapid deployment to new universities, and previously worked at Intel; sophomore Neha Onteeru, who interned at Giesecke & Devrient and who now leads Semester.ly's marketing efforts and brand ambassador program. Presler says that outside of Johns Hopkins, Semester.ly has brand ambassadors, engineers, and a graphic designer.