A look at what protections are in place to keep domestic abusers from getting guns, the most common weapon used in intimate partner homicides

Twenty-two percent of women in the U.S. report that they have been physically assaulted by an intimate partner in their lifetimes, and women are nine times more likely to be killed by a husband or intimate partner than by a stranger.

The Centers for Disease Control and Prevention report that in 2012, there were more than 1,200 intimate partner homicides in the United States—data which doesn't include statistics from unsolved cases, or murders committed by ex-boyfriends. More than half of these reported homicides were carried out using a gun.

22% of women report that they have been physically assaulted by an intimate partner in their lifetime, and women are nine times more likely to be killed by a husband or intimate partner than by a stranger.

In recent years, gun-safety advocates have called on Congress and state governments to strengthen and expand laws to keep domestic abusers from getting firearms—the most common weapon used in intimate partner homicides. A recent Hub report on the gun control debate included data from a 2015 public opinion survey conducted by the Johns Hopkins Center for Gun Policy and Research which found that 78 percent of gun owners and 80 percent of non gun owners favor preventing sales of firearms to individuals with temporary domestic violence restraining orders.

To Hub took a closer look at the issue, examining federal and state laws already on the books preventing intimate partner gun violence and the loopholes experts say are often overlooked.

What laws exist to protect victims of domestic abuse from gun violence?

A 1994 amendment to the Violent Crime Control and Law Enforcement Act prohibits anyone who is the subject of a protective order involving domestic violence from buying or possessing a gun. A 1996 provision to the act, sponsored by Sen. Frank Lautenberg, a New Jersey Democrat, expanded the list of people prohibited from purchasing and possessing firearms to those convicted of misdemeanor crimes of domestic violence. Commonly known as the "Lautenberg Amendment," the law defines a misdemeanor crime of domestic violence as an offense with the use or attempted use of physical force, or the threatened use of a deadly weapon.

State laws vary with respect to guns and intimate partner violence. Some are more restrictive than federal laws. As of 2015, 18 states had laws authorizing police to remove firearms when responding to a domestic violence complaint, and 28 states allowed courts to order a defendant to surrender firearms as a condition of a protective order.

Do these laws work?

Laws intended to prevent access to guns by domestic abusers have significant limitations, says Jacquelyn Campbell, a professor in the Johns Hopkins School of Nursing's Department of Community-Public Health. For example, dating partners are not covered by federal prohibitions unless the partners are/were co-habitating as spouses or have a child in common.

Statistics from the U.S. Department of Justice show that domestic violence homicides committed by a current or former dating partner has risen for three consecutive decades. In response to this so-called "boyfriend loophole," Sen. Amy Klobuchar (D-Minn.) introduced the "Protecting Domestic Violence and Stalking Victims Act of 2015" to prohibit people convicted of misdemeanor crimes of stalking from possessing firearms and expand the victims protected to include dating partners. Others have introduced similar bills.

Campbell says that while some states have robust laws and protocols in place to prevent high-risk individuals from acquiring or keeping guns, there are other loopholes. Some domestic violence offenders possess multiple guns and don't register them all, she says. They might hand over one gun to law enforcement but have access to others.

"Maybe they give one gun to a friend or family member," says Campbell, who has been working for years to try to strengthen laws needed to keep guns away from perpetrators of domestic violence and safeguard victims. "Authorities need to be careful to check how many guns a person owns. This might involve tedious paperwork and often gets overlooked."

A person convicted of a domestic violence crime can also purchase a gun without a background check at a gun show, for example, she says.

Evidence suggests that laws aimed at keeping guns out of the hands of domestic violence offenders do work.

"There are good laws on the books about taking guns away from known domestic violence offenders," Campbell says. "It is imperative for us to wok with policymakers and those in the criminal justice system to enforce the laws on the books and strengthen others, as they can help save lives." 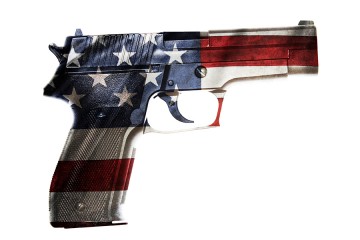 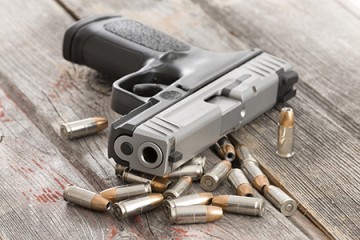