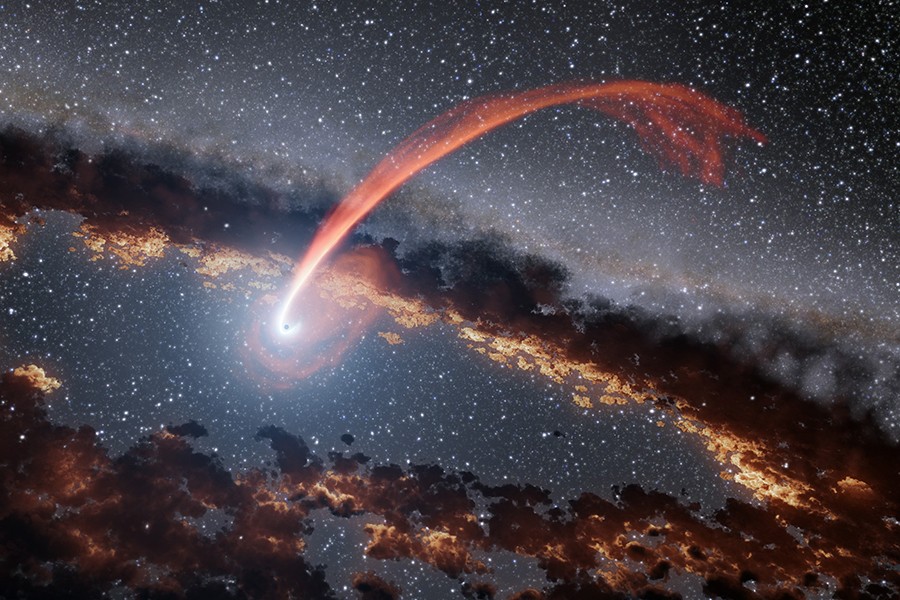 Image caption: Illustration shows a glowing stream of material from a star as it is being devoured by a supermassive black hole in a tidal disruption flare

Research led by Johns Hopkins University astrophysicists using information from a NASA space telescope breaks new ground in ways to observe a star swallowed by a black hole, promising to help paint a clearer picture of this cosmic phenomenon.

The results, published online in the Astrophysical Journal, are based on two methods that are new in the study of this sort of star destruction: the first infrared observations, and using galaxy dust to reflect, or "echo," the electromagnetic energy burst of a star being devoured by a black hole, called a "tidal disruption flare."

"What happens to the mass of the star once it's torn apart? Is it heated up? Does it go quickly into the black hole? Does it swirl around for a while?"
Julian Krolik, JHU astrophysicist

The approach, which in this case allowed scientists to measure flare energy more precisely than had been done before, offers fresh ways to understand "tidal disruptions." The phenomena were first raised hypothetically in the 1970s, and only studied closely since 2005, although the first possible examples were claimed several years earlier, said Julian H. Krolik, a professor in the Department of Physics and Astronomy at Johns Hopkins and one of four authors of the paper.

"What happens to the mass of the star once it's torn apart?" Krolik said. "Is it heated up? Does it go quickly into the black hole? Does it swirl around for a while? These are the questions" that this approach could help to answer, Krolik said. He co-wrote the paper with lead author Sjoert van Velzen, a Hubble Fellow at Johns Hopkins; Alexander J. Mendez, who was a post-doctoral fellow at the university when the work was done; and Varoujan Gorjian, an astronomer at NASA's Jet Propulsion Laboratory, a division of Caltech.

The four scientists used images that had been compiled by the Wide-field Infrared Survey Explorer (WISE) telescope, which NASA launched into Earth's orbit in 2009. The study considered five instances in which a star had apparently moved close enough to the gravitational pull of a black hole to be drawn in, have its mass stretched and compressed into long strands, and be devoured—a "tidal disruption."

The events—each of which can unfold over a period of months—occurred in five galaxies, the closest of which is 840 million light years from Earth.

In each case, the destruction of the star set off a burst of energy, or flare. Krolik said it's been generally expected that the flares would emit most of their energy in low-energy X-rays or extreme ultraviolet light, but these bands are very difficult to observe. For that reason, most observations have been in visible or near ultraviolet light.

This research relied on indirect observation of the flare. The scientists compiled information gathered by the telescope on the temperature of the dust roughly 2 trillion miles away from where the stars were destroyed by the black holes. The intense radiation of the flare first burns away the dust, cleaning out a sphere with a radius of about 2 trillion miles. At the edge of this sphere, dust absorbs and then re-emits the heat from the tidal disruption flare, creating a thermal "echo" picked up by the telescope.

"The dust echo thus provides a unique means to measure total energy that is emitted during the stars' destruction," van Velzen said. "A measurement of the total energy is very important; without this we have an incomplete picture of what happens during a stellar tidal disruption. For example, the total energy is needed to understand if the star got fully destroyed, or if the black hole only nibbled a piece of the star."

The study refined the understanding of the energy produced by these flares. The flare energy was measured at 10 times more than previous observations saw, but one tenth the energy predicted in the earliest, most simple models.

That point is part of an emerging understanding of a cosmic event that has only been observed a few dozen times. The picture is bound to become clearer as researchers develop new methods, including the first infrared observations.

The research says "there's value in the use of infrared telescopes in looking for these echoes," added Krolik. "We expect to do more." 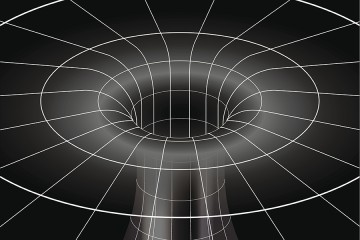 Can one cosmic mystery help solve another? 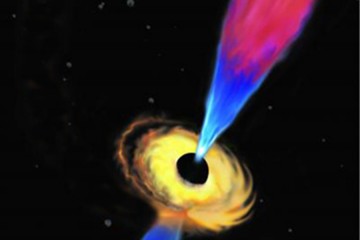