Johns Hopkins University President Ronald J. Daniels discussed the future of public universities earlier this month on the final day of the annual Aspen Ideas Festival, calling attention to the increasing strain being put on state schools in the U.S. by governance, politics, and funding cuts.

Daniels spoke with New York Times journalist David Leonhardt about the need to protect funding for public universities, a conversation that dovetails with his recent report on the topic titled "Converging Paths: Public and Private Research Universities in the 21st Century."

"But more than that," he added, "public universities are subject to a whole host of different constraints that really limit their capacity to be competitive with private peers and to discharge a lot of the goals they were originally created to serve. … In a number of ways, regulation is really hobbling their ability to function effectively."

/ The Chronicle of Higher Education

Daniels advocated for depoliticizing public universities by "taking governors and state legislatures out of the business of appointing boards," and for clearer articulation of the role of public universities, in turn leading to less micromanagement by state governments.

Daniels and Leonhardt touched on a number of other topics during their 55-minute discussion, including the decline in federal funding for research. The dropoff has disproportionately affected young scientists, Daniels noted, a shift that poses grave risks for the future of science.

"If we look back at the great scientific breakthroughs that are made, they are typically made by young people—Einstein, Watson and Crick," Daniels said. "… It's typically people in their 20s and early 30s who aren't burdened by convention, who can think about a field anew and can really make transformative change. And those are the people that are falling out of the system."

Daniels also talked about Baltimore and how the city has responded to the unrest in the wake of the death of Freddie Gray in April 2015.

"[Those events] forced a recognition of the magnitude of the institutional failings that we have in Baltimore and, in truth, characterize a number of American cities—everything from woefully underperforming K-12 systems to lack of green space to high levels of violence and problems of criminal justice," Daniels said. "But what's been striking about Baltimore is, as a city of 600,000, it's just small enough that you can make change happen. And change is happening. It's got a great foundation community, and what's really been exciting is to see the stakeholders of Baltimore—business, foundations, the faith community—really rallying and using this as a moment when hopefully we can tip the city in a different direction." 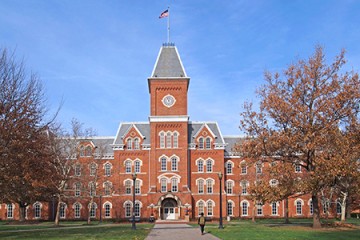