Her reaction came in response to author Sonia Shah's presentation Thursday on worldwide pandemics and the ways humans actively contribute to their spread. Shah was one of three acclaimed writers welcomed to the Johns Hopkins Bloomberg School of Public Health for a forum titled What's Next?: The Future of Public Health, which Rovner moderated. 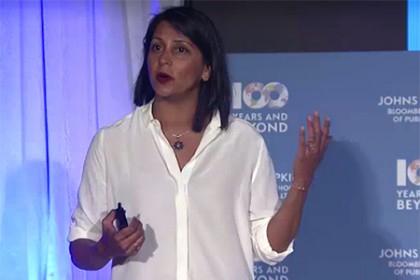 Shah noted that people tend to have one of two reactions to a rising threat of an infectious disease: "We either freak out completely," she said, "or we deny it."

To make her point, Shah compared a recent dengue fever outbreak in Florida—where people made light of the situation "with parades in streets"—to the extreme reaction of mandated quarantines for health workers exposed to the Ebola virus.

"We tend to feel powerless in the face of infection," said Shah, who spent six years researching and writing her new book, Pandemic: Tracking Contagions, from Cholera and Ebola and Beyond.

Shah argued pandemics are a pressing concern of the present and future. She said we're currently living through three pandemics—HIV, cholera, and Zika—and experts expect "novel forms of influenza" to present threats.

Generally, Shah said, society tends to task these public health problems to "the white-coated experts," when in fact a multidisciplinary approach—folding in scientists, politicians, farmers, veterinarians, and communities—would be more effective in examining the causes of pandemics from the ground up, from urban crowding to factory farming.

The forum explored other weighty public health topics as well. NPR investigative news correspondent Laura Sullivan discussed the dire state of mental illness among America's incarcerated, and Yamiche Alcindor, a national political reporter for The New York Times, shared how she has discovered public health topics through her coverage of social justice and political news.

Every day, there are 700,000 people in U.S. detention centers who suffer from serious mental illness, said Sullivan. She noted that this figure equates exactly with the number of people the U.S. had formerly housed through state-run mental asylums, before abandoning the practice some 50 years ago.

But Sullivan highlighted the inadequacies of the replacement solution: community mental health centers that see all-too-frequent shutdowns or funding cuts, leaving the burden to jails and prisons that are not equipped to deal with psychiatric issues.

Within Chicago's Cook County Department of Corrections, Sullivan said she found psych wards with "leather restraints and padded rooms"—the same conditions of mental asylums of the past—yet now these individuals are "released back into the public without any sort of treatment at all" following their incarceration.

A study on Miami-Dade County that Sullivan cited found that just 97 individuals had posed an outsized burden on the area's resources—they were collectively arrested almost 2,200 times over five years, spent a combined 27,000 days in jail, and ultimately cost taxpayers $13 million. The majority of these individuals had untreated cases of paranoid schizophrenia.

When Rovner asked whether Sullivan saw any promising policy solutions to deal with the problem, she answered bluntly. "The short answer is no," she said. "Jails and prisons are just making do."

Alcindor shared her personal experiences covering social justice issues, including the rise of the Black Lives Matter movement and the unrest in Ferguson following Michael Brown's shooting. She had been the only reporter to see Brown in his casket, an image she says has haunted her since.

Alcindor also described a woman she had met earlier in her career when she wrote for The Washington Post. The woman, from Anacostia, had been using the Emergency Room as her primary form of health care for two decades. She went to ER to treat her ailments, from asthma to knee problems. The woman, said Alcindor, represents a broader, glaring health care issue for the nation.

Bloomberg School dean Michael Klag said the school had deliberately sought out writers rather than academics for the forum in order to get a wider view of issues of public concern.

The event, part of the Bloomberg School's celebration of its centennial year, shared insights that were "not pleasant," Klag said, but they were also "inspiring" for public health workers.

"The things you told us really pushed us," he told the speakers. 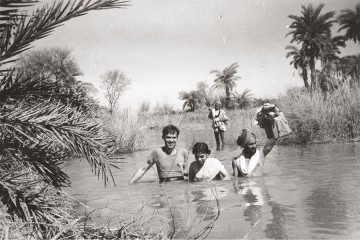 Published June 10, 2016
Historian Karen Kruse Thomas covers half a century of the Bloomberg School of Public Health, from school leadership to contributions to public policy to it influence on health in Baltimore and beyond 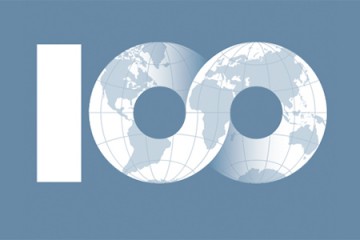