The changing face of the American family: A conversation with JHU sociologist Andrew Cherlin 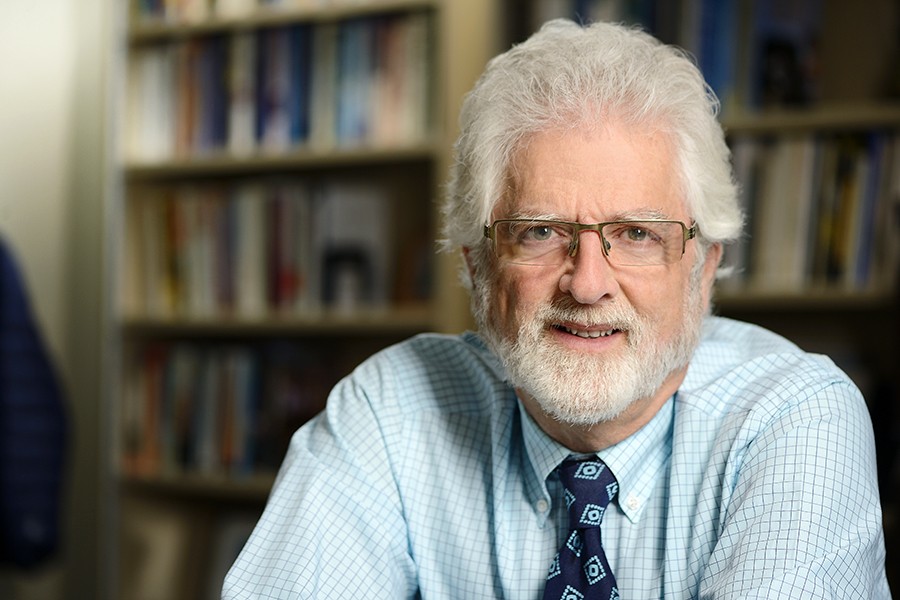 Andrew J. Cherlin, a distinguished member of the Johns Hopkins faculty in the Department of Sociology, joined the university in 1976. He served as president of the Population Association of America in 1999 and several years later was awarded a Distinguished Career Award from the American Sociological Association. Last week, he was selected to the 236th class of the American Academy of Arts and Sciences.

But he began observing the subject that would become his life's work—the American family—in the cradle.

The author of The Marriage-Go-Round and a frequent contributor to the op-ed page of The New York Times, Cherlin specializes in the study of marriage, particularly as the institution shapes, and is shaped by, life in America's cities.

He has said that he very early "had the sense that American marriage and family life differed fundamentally from the other Western countries—Western Europe, Canada, Australia, New Zealand—in a way no one was writing about."

"The first major change since [the 1950s] would be the rise of women working outside of the home. That underlies all of the other changes. The male response to this was often, 'I have to keep my wife in the house because I don't want other men to see her.'"
Andrew Cherlin, JHU sociologist

In the United States, Cherlin says, there are more marriages and remarriages, more divorce, and more people living together for short periods of time before moving on than in all other nations in the first world of the West.

"More in-and-out-of relationships than anywhere else," he noted in an online interview with Penguin Books upon the 2009 release of The Marriage-Go-Round, a comprehensive overview of marriage and family in the United States. "We step on and off the carousel of marriages and partnerships faster than anywhere else."

At JHU's Homewood campus, Cherlin teaches Introduction to Sociology with two units on family life in addition to a seminar on the sociology of the family—always oversubscribed—that he limits to 15 to 20 undergraduates so, he said, "we can have real discussions."

This on-campus conversation with Cherlin—the father of two, a grandfather, and married for the second time—took place in the coffee shop of the Brody Learning Commons on a bitter cold afternoon in February.

"I don't give a lot of marriage advice," Cherlin said. "And I'm consistently turning down opportunities to be a pop marriage counselor in the media."

In his own words, Cherlin shares what he has learned about the changing face of the American family.

I was born in Hartford, Connecticut, in 1948. My dad's name was Alexander, and he was a wholesale salesman for Rheingold beer. My mother was Beatrice, a frustrated 1950s homemaker who became the administrator of orthodontia at the University of Connecticut dental school after her children were grown.

I went to graduate school at UCLA in the 1970s and became interested in urban problems combined with the problems of families and cities. For several decades I dropped the cities angle and just focused on families. Now I'm back to both.

Marriage is a social institution—it's not in our genes. Penguins might mate for life, but we're not penguins. We are now seeing a rise in divorce among older people, gray divorce.

Yet marriage is universal, and it has served us well for a long time. Partnering is in our genes, nurturing children is, but marriage is a social construction designed to create unions that can raise and support children. The advent of this—a social contract to create legal families—is just a few thousand years old.

There has been more change in the American family since I've been alive than any other time in human history.

Divorce was very unusual in the 1950s. After the Depression and World War II, America was prosperous, and that generation turned inward toward home and family. No one realized how unusual the 1950s family actually was, and it was certainly better to be the husband in that unit than the wife. Those couples also made a lot more money than their parents.

Marriage of that era was created to support the idea that a man was the king of the castle and made all of the important decisions.

So the first major change since then would be the rise of women working outside of the home. That underlies all of the other changes. The male response to this was often, "I have to keep my wife in the house because I don't want other men to see her."

The last half-century has seen the American family go from the breadwinner/homemaker model to the two-career family of the 21st century, in which the woman is earning more while the male would like to see himself doing as well as his father. But that isn't always the case.

Next is the greater acceptability of children being born outside of marriage and the overall decline in the dominance of marriage throughout society and the advent of same-sex marriage.

The problem in 1950s marriages was not defined until 1963, when Betty Friedan released The Feminine Mystique and called it "the problem that has no name." That problem was my mother's problem: the frustration of homemakers living incomplete lives. My first wife was a journalist, she had a career, and I could see my mother looking at her with envy.

Marriage used to be the only path to adulthood for Americans. Now there are multiple paths. You can live with somebody and have a child with them. You can have a series of relationships or remain single your whole life without being viewed as a bachelor or a spinster—words that we don't use anymore. Even the word illegitimate isn't used very much or carry the stigma it once did.

At the time my first marriage was disintegrating in the late 1980s, I was studying effects of divorce on children. Studying divorce didn't help me avoid one, but there are ways to minimize the effects of it on children, mostly by keeping the kids out of your conflicts with your ex. You must share your children. Which is very obvious except to ex-partners who are angry and hurt.

Some think the weakening of marriage is a disaster for our society. For years, conservatives attributed the divorce rate to a cultural decline. Liberals said it was all due to economics. Now both sides have begun to change their views to see that it is both cultural and economic. And I see that as an opening for both sides to help with things like offering earned income tax credits not just to married couples but to young men looking for steady work.

Right now you have to be low-income and raising children—not married but raising children—to get that credit. This is something both Paul Ryan on the right and Hillary Clinton on the left support, to expand tax credits to young men to encourage them to work.

To be a good prospect as a husband you have to have steady earnings. White Americans without college degrees are doing worse than their parents did. Black Americans and Hispanics are doing better than their parents. But very few of any demographic without a college degree are good providers. This has led to short-term relationships that produce children but don't last.

The white working class has adopted the family patterns of the poor, the black model of previous generations. Without work, the white guy who would have earned a good living at Sparrows Point [steel mill], married young, and raised a family is now having children in brittle co-habitation. He's mad that the jobs are gone and will likely vote for Donald Trump.

College graduates are getting married later and waiting until after marriage to have children. They often live together before marriage but tend to marry the person they are living with. Their divorce rates are going down. The divorce rate for college graduates is one in three. For less-educated people, it's one in two.

Tying the knot used to be the first step to adulthood and now it is often the last. If you were a young woman in the 1950s and didn't marry upon graduation, whether from high school or college, you were an oddity. Today, if you're even engaged by the time you graduate, you're an oddity.