Two faculty members from the Department of Computer Science at Johns Hopkins University's Whiting School of Engineering recently received recognition for their work on projects that have significant applications in biology and life sciences. 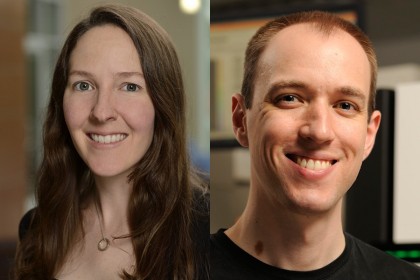 Alexis Battle, an assistant professor, has been named a 2016 Searle Scholar. The honor recognizes the potential of researchers to make significant contributions to chemical and biological research over the course of their careers. Each Searle Scholar is awarded $300,000 in flexible funding to support his or her work over the next three years. This year, 15 scholars were selected from a pool of nearly 200 applicants.

Battle uses machine learning and probability to unravel the impact of genetics on human health. She uses computer science to leverage diverse data in order to create comprehensive models of genetic effects on cells.

"The penetration of computer science into all aspects of life, including biology and chemistry, manifested itself in this award," said Yair Amir, chair of the Department of Computer Science.

Ben Langmead, also an assistant professor, received the Benjamin Franklin Award for Open Access in the Life Sciences. The award is presented annually to someone who has promoted free and open access to important materials and methods used in the life sciences.

Langmead is one of the most highly influential and highly cited authors of open source, free bioinformatic software. His Bowtie read alignment tool and its sequel, Bowtie 2, are widely used, with more than 10,000 citations between them. Both Bowtie versions are compatible with more than 50 other software tools. Additionally, he has made available a large collection of very popular teaching resources.

Langmead is the 15th winner of the Benjamin Franklin Award. Steven Salzberg, a Bloomberg Distinguished Professor of Biomedical Engineering, Computer Science, and Biostatistics at Johns Hopkins, and one of Langmead's colleagues, received the award in 2013. In fact, Langmead says attending a lecture delivered by Salzberg in 2007 inspired him to pursue genomics.

"I hadn't thought of genomics as an area that I could work in until I met Steven Salzberg," Langmead recently told Bio-ITWorld.com.