In May 2011, Jasmijn Rijcken—a Dutch citizen, cyclist, and employee of a Dutch bicycle company—was visiting New York for the New Amsterdam Bike Show. While taking a ride through the city she was stopped by a New York police officer, the Daily News reported, and told the length of her skirt was too short—disturbing and distracting to people in cars. 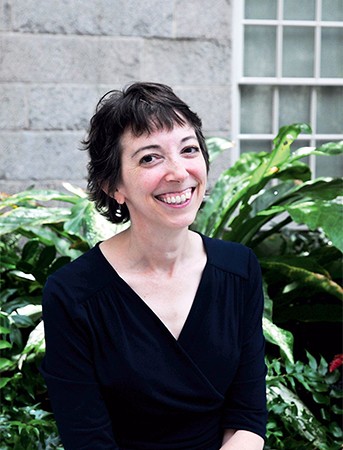 More than a century earlier, Angeline Allen of Newark, N.J., rode a bike through town wearing pants. "Dark blue corduroy bloomers, to be exact," writes author Margaret Guroff in her recent book, The Mechanical Horse: How the Bicycle Reshaped America Life. "Snug around the calves and puffy above the knees." Modest attire, to be sure, but shocking enough at the time to be reported on in the local paper.

Guroff, a graduate and faculty member of the Johns Hopkins Advanced Academic Programs writing program, introduces Allen to explore how the cost, weight, and availability of the safety bicycle that entered the American market in the late 19th century influenced women's lives—loosening up their clothing to be able to ride and freeing them to travel further from the immediate confines of where they lived. It's one of the many illuminating and entertaining chapters in her cultural history, published by the University of Texas Press.

Guroff is a cyclist herself, commuting about an hour from her home to her office at AARP The Magazine in Washington, D.C., where she is an executive editor. And her cycling expertise often informs her writer's eye in the book. The reader feels the weight of the gear and the unforgiving weather when Guroff recounts the story of the U.S. Army's 25th Infantry Bicycle Corps, the Buffalo Soldier unit that biked 1,900 miles from Fort Missoula, Montana, to St. Louis, Missouri, in 1897. She covers the DIY modifications made to old bikes by some Northern California guys in the late 1970s that would enable them to "survive the bashing downhill ride[s]" of unpaved roads that grew into the mountain biking explosion of the 1980s.

Throughout, she brings these biking histories back to American society at large, showing how the two-wheeled machine has, at various moments, shaped the city and countryside we see today.

The Hub caught up with Guroff, who visits Barnes & Noble Johns Hopkins on Tuesday at 7 p.m., by phone to talk about researching bike history, bike instructor romances, and the turf war over access to streets.

What inspired your interest in the history of the bike in U.S.? Did you know much about the history of cycling in the U.S. prior to starting this project?

I knew absolutely nothing. The way I got started was that I read in a book that cyclists had been instrumental in getting American roads paved. Before the bicycle and long before the car, our roads were mostly dirt and rutted and horrible, and cyclists got together and worked to change that. I had never really thought of the bike as existing before the car or as having any kind of impact on the way we lived. So I started looking into it and found a lot of great scholarship about the effect that the bike had had on the country—on women's rights and women's dress, on how our consumer culture developed. Scholars had been writing about the bike's influence on many different aspects of American life, but it had been a long time since anybody tried to put that all together into one narrative. 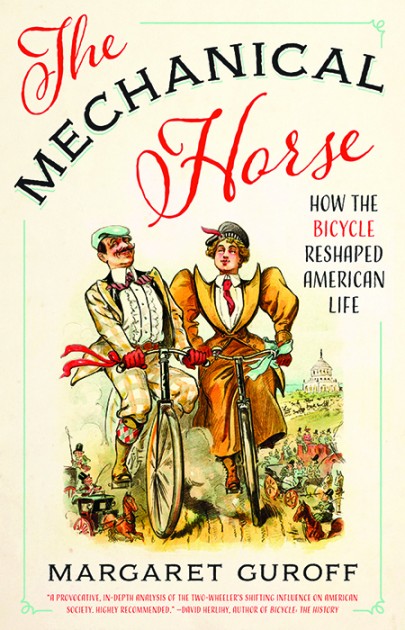 What was the research like, because flipping through your bibliography, you're pulling from a wide variety of sources, and you've done an impressive job of forming a compact narrative from them.

I wouldn't have been able to do it without the internet and the Johns Hopkins library system. It's amazing how much original source material is now available online, especially if you have access to the library's databases. I started my research by reading the work of scholars who had spent weeks or months or years in archives, discovering forgotten documents and piecing together theories about the past. I was not able to do much archival research myself, because I have a job that I have to show up to every day, but the fact that a lot of old newspapers and magazines are digitized now meant that I could usually call up the sources these scholars cited and read through them for myself. Then I'd search through historical journals and books for evidence that backed up or challenged the scholars' theories, and start to develop my own thoughts. All from my desk at home before work.

You mentioned that finding out the role that bikes played in paving roads got you started. What sparked your interest about that?

It was just this window into a different time, a time when cyclists were considered the kings of the road. You think of the car as the ultimate country-touring vehicle, but after the train appeared and before the bicycle became popular, there was this phenomenon like flyover country. If you lived between train stops, or if you lived off the railroad tracks, you were really inaccessible. And it was the bicycle that first allowed a lot of people to move about based on their own schedule and where they wanted to go rather than the train schedule and where the train tracks had been laid.

Do you have any favorite stories or people from this research that you really appreciated? I'm always happy to see more about the 25th Army Regiment, just because that's one of those lesser-known histories.

I loved those guys—that 1897 ride was grueling, and they pulled it off. Another favorite of mine was Angeline Allen, the New Jersey divorcée who got written up in the newspapers for wearing pants while cycling. I don't think I would have wanted to hang out with her, because she sounds like she was a piece of work, but as a subject she was great. One of the things that broke my heart about the book were all the people I had to leave out. There were guys who rode high-wheeled bikes across the country long before there were roads.

There was also this phenomenon that I didn't get into of bicycle instructors, the personal trainers of their day, running off with their wealthy female clients. I found one couple, it's a heartbreaking story, she was a wealthy young widow with a 9-year-old son, and she fell in love with her bicycle instructor. They got married, and because he was black she got kicked out not only of her in-laws' house but her own parents' house. The couple had to go on the lam because her in-laws tried to take the child—because, of course, he couldn't possibly be raised by this wanton woman who would marry outside of her race. I traced them to a farm in upstate New York, but there didn't end up being a place for them in the book.

Somebody else who did this was the widow of George W. Abell, one of the owners of the Baltimore Sun. His widow, in 1897, married her bicycle instructor, who was white but about 20 years younger. And none of the Abells, except her own daughter, would go to the wedding.

So bicycle instructors were like the tennis coaches of the '70s.

Exactly. But it kind of illustrates the social mobility that the bike begins to make possible because it's bringing people of different social classes into this social activity.

As a bike commuter who learned about this complex history of the bike as a form of transportation, recreation, a consumer good, its role in many aspects of American society, has it given you any richer understanding of the current urban policy discussions and debates as they pertain to public transportation, how city roadways are organized, et cetera, that is going on right now?

It puts it in historical perspective. You see that whoever has primary use of the road, they always object when somebody else tries to get a piece of it. That was as true of people driving horses when bicycles first appeared, or people walking down the sidewalk, which is justifiable—when you're walking down the sidewalk you don't want somebody zooming into you on a bike. But these are turf battles.

There's an amazing book by Peter Norton about the creation of the notion of a jaywalker and the fight between pedestrians and automobiles for the street in the 1920s. When automobiles first became very common, their proponents had to completely change the rules about who was allowed to be in the street. Before that, if you were standing on one side of the street and you wanted to go to the other side, you walked across, and anyone who was trying to drive down the street had better watch out. When it's horse-drawn traffic, the horses are going to stop for you for the most part. But a car is just going to plow right into you. It was a bloodbath. So they had to start saying "You can only cross at the corners" and "You can only cross with the light." That was entirely new.

Today, we're looking at a situation where, particularly in cities, there are more bicyclists, they are better organized than they've been in a long time, they're advocating for safer lanes for cyclists, and then when these are built, more people think, OK, I'll bicycle. So the voice of the cyclists grows louder. So there's competition with drivers, and tension.

I'm going to ask you an unfair question—some Johns Hopkins researchers recently published a paper saying that bike ownership around the world has gone down over the last 30 years. I realize you specifically researched the bike's history in the U.S., but given what you've come to understand, what might account for that decline?

I can't really say anything about global trends because it's not something I researched much, but it's certainly the case that bike sales in the United States are declining. They're staying steady when it comes to high-end bicycles, but children are much less likely to have bikes now than they were 10 or 20 years ago. There is a boom of a sort, but it's localized to prosperous, gentrifying areas in big cities. And it's following the return of the middle class to American cities. But there are a lot of people who are left out of this because there are many places in this country where it isn't safe to ride a bike or people don't live close enough to their jobs or their schools in order to make it practical. And part of what the United States bicycle industry is trying to respond to right now is the fact that fewer kids are riding and it's not a diverse—racially, ethnically, or economically—group of people who are riding. Maybe there are a ton of older white guys who are buying new bikes every year, but they're not going to be around forever. 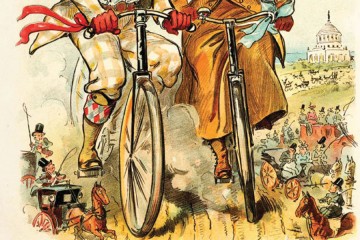