Release the CRACUNS: APL develops drone that can operate in the air or underwater

An unmanned aerial vehicle that can operate effectively in both air and water has been developed by researchers at the Johns Hopkins University Applied Physics Laboratory. 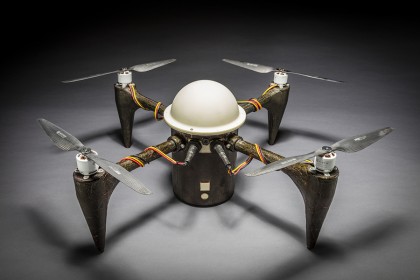 Image caption: The Corrosion Resistant Aerial Covert Unmanned Nautical System—or CRACUNS—is a submersible UAV that can be launched from a fixed position underwater, or from an unmanned underwater vehicle.

The Corrosion Resistant Aerial Covert Unmanned Nautical System—or CRACUNS—is a submersible drone that can be launched from a fixed position underwater, or from an unmanned underwater vehicle.

CRACUNS enables new capabilities not possible with existing aerial or underwater platforms. CRACUNS payload flexibility and its ability to operate in harsh environments enable a wide array of potential missions, and its low cost makes it expendable, allowing for the use of large numbers of vehicles for high-risk scenarios, researchers said.

"Engineers at APL have long worked on both Navy submarine systems and autonomous UAVs," said Jason Stipes of APL's Sea Control Mission Area, project manager for CRACUNS. "In response to evolving sponsor challenges, we were inspired to develop a vehicle that could operate both underwater and in the air."

The most innovative feature of CRACUNS is that it can remain at—and launch from—a significant depth without needing structural metal parts or machined surfaces.

To make that possible, the team needed to overcome two big challenges: underwater pressure and corrosion.

The APL team leveraged advances in additive manufacturing and novel fabrication techniques available at the laboratory's facilities to build a lightweight, submersible, composite airframe able to withstand the water pressure experienced while submerged.

To ensure CRACUNS could operate effectively in a corrosive saltwater environment, the APL team sealed the most sensitive components in a dry pressure vessel. For the motors that are exposed to salt water, APL applied commercially available protective coatings. The team tested the performance of the motors by submerging them in salt water. After two months, the motors showed no sign of corrosion and continued to operate while submerged.

"CRACUNS successfully demonstrated a new way of thinking about the fabrication and use of unmanned systems," said APL's Rich Hooks, an aerospace and mechanical engineer who was responsible for the novel additive manufacturing techniques used on CRACUNS.