'You Are Hear' exhibition grew out of anthropology class project 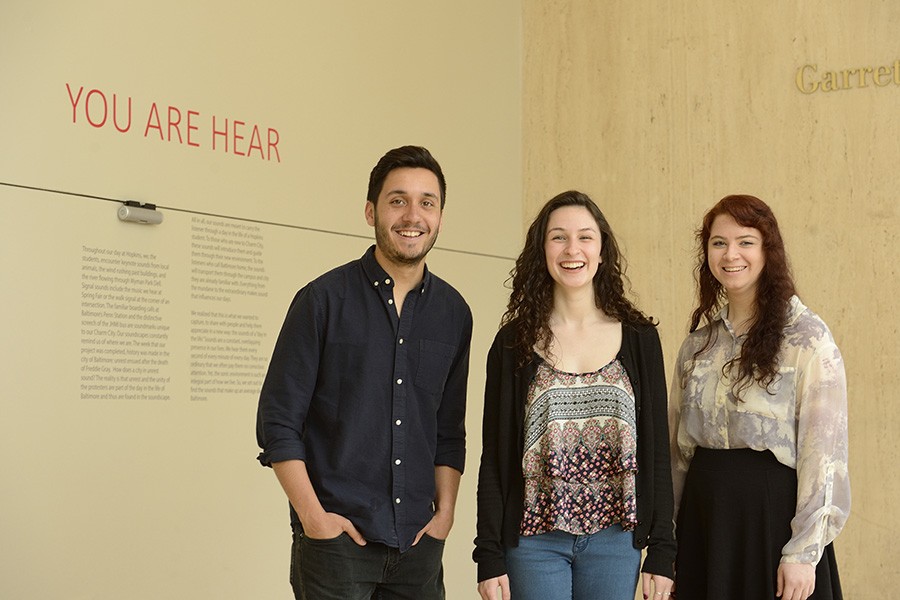 Image caption: 'You Are Hear,' an installation created by JHU undergraduates (from left) Carlos Concepcion, Raquel Serruya, and Nina Krauss, grew out of class project for an anthropology course.

The sound of the JHMI shuttle screeching to a halt. The drilling and chaos of construction on 34th street. The cheerfulness and chatter among Spring Fair goers.

These trademark noises, familiar to any Blue Jay, are now circulated throughout the hushed halls of the Milton S. Eisenhower Library as part of a temporary installation, curated and developed by three Johns Hopkins University students.

You Are Hear, a small-scale exhibit displayed on the Q-Level of MSE, is an homage to Hopkins and its surroundings. Here, find the keynote noises of Johns Hopkins as they fill the hallways.

"We wanted to define our surroundings around sounds instead of sight," said Raquel Serruya, a junior public health studies major.

Serruya and her peers, Carlos Concepcion and Nina Krauss, first developed the idea of an absorbing soundscape in April 2015 as students in Anand Pandian's course "Ecological Anthropology."

Using their phones, the students (plus two others who were involved in the production of the group project) set out to collect noises that represented a day in the life of a Hopkins students at that time. They recorded different segments, from nature to music to construction. They captured the sounds of the protesters demonstrating in the streets following the death of Freddie Gray.

"We went wherever it took us," Serruya said.

When they presented the final project to the class, Pandian, director of undergraduate studies in the Department of Anthropology, encouraged them to exhibit it.

The students worked with Jacqueline M. O'Regan, curator of cultural properties for JHU's Sheridan Libraries, to bring their vision to life. They met with Mark Pollei, senior book conservator and director for Conservation and Preservation, to develop a minimalist text wall that would accompany the soundscape. The finishing touch: a red rug marking the perfect place to get absorbed in the soundscape.

You Are Hear runs through March, 31.