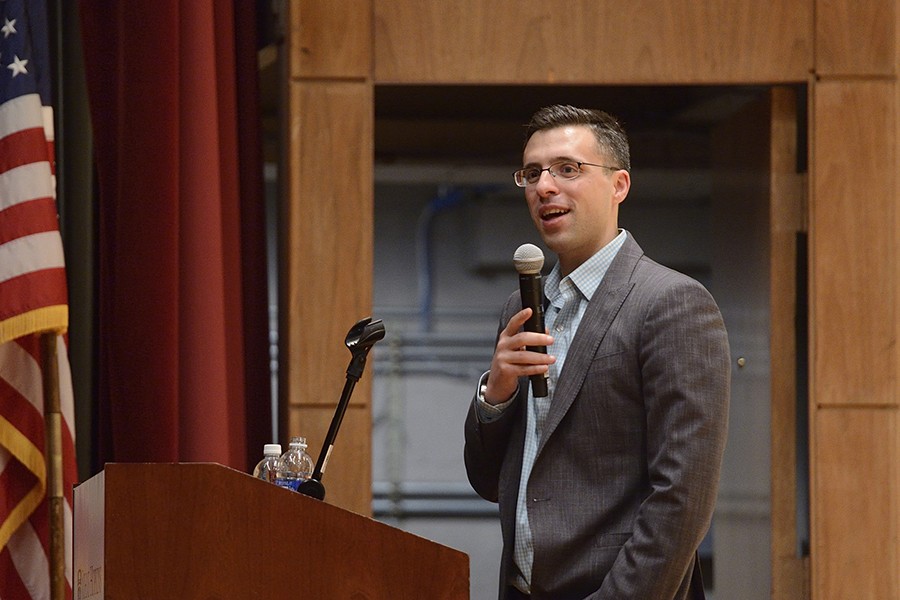 Political pundit and Vox.com founder Ezra Klein isn't sure if this year's presidential primary is an aberration or the new normal.

Klein spoke to an audience at Johns Hopkins University on Wednesday about the "crazy goat rodeo" that is the 2016 election and the many things that define its weirdness. The event was the fourth in this semester's student-run Foreign Affairs Symposium series.

Forget everything you thought you knew about American politics, Klein said. Socialism is no longer a dirty word. Super PACs have lost steam. The Republican front-runner retweets white supremacists and Mussolini quotes and continues to lead.

"That dude [Donald Trump] won a bunch of primaries the other night and he came out and talked about his steaks. Like, not the stakes in the actual election," Klein said. "We've got some issues."

How did this happen? No one knows. Not Klein nor the other pundits who comment daily with confidence.

"I come to you with humility," he said. "I didn't predict any of this."

And with that, he presented several ways in which the 2016 election defies past political wisdom.

1) "Party elites don't matter, and endorsements are a garbage predictor of political outcomes."

The reigning theory used to be "The Party Decides," or that party elites and party structures had the most control over elections. But in a year in which Ted Cruz doesn't have a single endorsement in the U.S. Senate (or at least didn't until Thursday) and Bernie Sanders wasn't even considered a player in the party, that theory no longer rings true. Klein cited a recent poll that found that by a 4-to-1 margin, Republicans would be less likely to vote for someone if they were a member of the establishment.

In New Hampshire, home of retail politics, where candidates formerly spent considerable time shaking hands and kissing babies, the two candidates who spent the least time engaged in face-to-face interaction with voters—Trump and Sanders—won the primaries.

3) "Socialist is a winning moniker, a winning affiliation in American politics."

Liberal was once a dirty word. Today, Sanders, a self-described democratic socialist, is going toe to toe with Hillary Clinton for the Democratic nomination. Polls suggest that young people in particular are not scared of socialism, Klein said.

4) "Super PACs have not been able to do anything."

Jeb Bush's $110 million super PAC failed to help him gain traction in the GOP race. For every couple million dollars he spent, Klein said, he fell three points in the poll. Trump and Sanders—neither of whom have a dedicated super PAC—are running on populist premises suggesting that freedom from significant special interest funding leaves them free to pursue policies that benefit the vast majority of Americans.

5) "Fundraising hasn't been a big deal so far."

The role of money in politics is perhaps overrated, Klein suggested. The candidates who are raising the most are not leading the polls. Trump hasn't done much fundraising at all. Sanders outraised Clinton by $10 million in February. Earned media, free media, and social networks might drive down the utility of traditional advertising, Klein said.

6) "Being a loyal member of the political party of whose nomination you're running for appears to convey no advantage on you whatsoever."

A record number of voters identify as Independents. The phenomenon of negative partisanship, or voting against the opposing party, but not feeling loyalty to the other, is one theory. Sanders has never really been a member of the Democratic Party. Trump is a member of the Donald Trump party, Klein joked. When not being a member of a party is an advantage, this theory makes sense.

Following his talk, Klein fielded questions from the audience, including why Cruz has so little support among his colleagues in the Senate and why Sanders has struggled with black voters in particular.

"What would a Donald Trump presidency look like?" asked one student.

"What does a nuclear winter look like?" Klein quipped. "The answer is nobody knows, and I think chief among the nobody who knows is Donald Trump."

There's a chance Trump identifies a series of reasonable advisors and is more moderate than other Republicans, Klein said, summarizing his optimistic scenario. His pessimistic scenario is scarier—he described a president who operates without a sense of shame, who has a demagogue's instinct for the worst voice in the mob.

"I think a bad Trump scenario is pretty different than a bad Marco Rubio scenario," Klein said. "I think it's much uglier, much more dangerous, much more racist, and much more authoritarian."