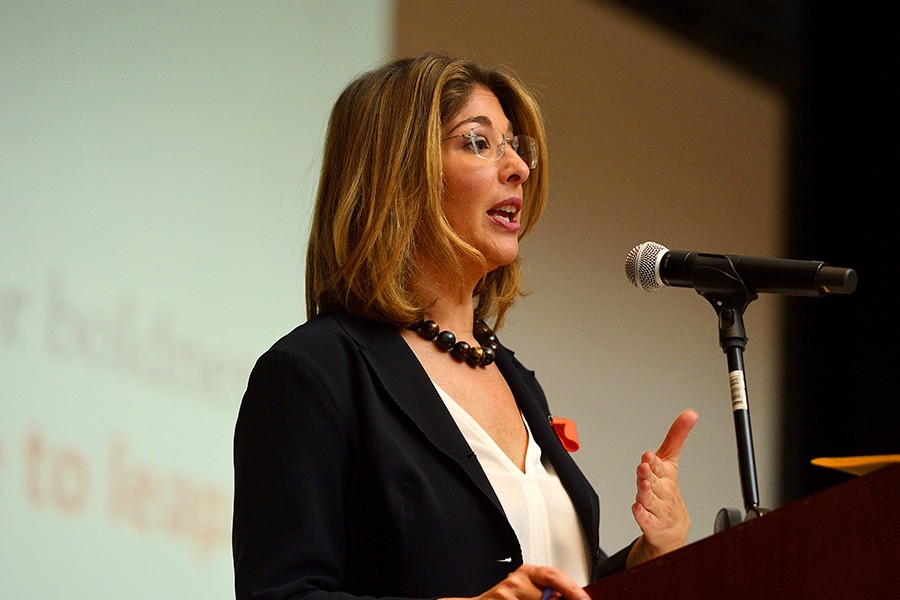 "I am here to talk about the crisis of climate change, and some of you may be thinking, 'That's silly—our political leaders solved that in Paris in December'," environmentalist Naomi Klein said to an audience at Johns Hopkins University's Shriver Hall on Tuesday evening.

A display behind her projected an image of world leaders celebrating the historic accord, a framework for reducing planet-warming greenhouses gases. The next slide displayed news headlines declaring "the end of the fossil fuel era."

Klein—an activist, columnist, and author who visited campus as part of the student-run Foreign Affairs Symposium—wanted to unpack the landmark deal and its accompanying headlines.

"It's the best our leaders could come up with so far, but it is woefully inadequate," she said, noting that nowhere in the accord do the words "fossil fuel" appear.

The 196 representatives from different countries agreed upon one central goal: Limiting pollution levels so that the rise in global temperatures does not exceed to 2 degrees Celsius (3.6 degrees Fahrenheit) above pre-industrial levels.

But there's a huge gap between the action plan and that goal, Klein said, and while leaders hope to remedy this by meeting every five years—the equivalent of what Klein called a "planet potluck"— the Paris Agreement itself is not even legally binding.

"We have a Supreme Court that has stalled the centerpiece of what [President Barack] Obama brought to Paris, Obama's Clean Power Plan," she said. "You have a slew of Republican candidates promising to break the U.S. commitments."

In her second book, The Shock Doctrine, Klein links capitalism and the climate crisis. On Tuesday, she discusses the flooding in New Orleans after Hurricane Katrina—which she witnessed first-hand—the response to the disaster, and the exploitation that followed.

"What Katrina taught me was that left to its own devices, our system is going to produce more and more shocks," she said, referencing the water crisis in Flint, Michigan, and the neglect of public schools in Detroit as recent examples.

There's a popular slogan within the environmental movement, she noted: "System change, not climate change." There are a number of intersecting issues that are linked to this cycle of shocks that lead to tragic events, Klein said.

"We have to see how climate change, racism, austerity, deepening income inequality, mass incarceration are all deeply interconnected," she said.

She discussed Baltimore's Freddie Gray and the lead poisoning he suffered as a young boy. He was a victim of environmental racism and, eventually, police violence, she said.

In the Curtis Bay neighborhood of South Baltimore—the most polluted community in the state, by one recent measure—a trash incinerator that will emit dangerous levels of toxins and greenhouse gases is expected to be built this year without the consent of the community.

During the Q&A portion of Tuesday's event, Destiny Walker, a Curtis Bay resident and member of Free Your Voice—a United Works Human Rights Committee dedicated to fair development—approached the microphone and called upon the audience to sign a petition to stop the project.

"We need action, because in taking action we can have something better than the present," Klein said. 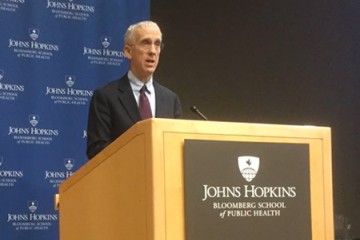 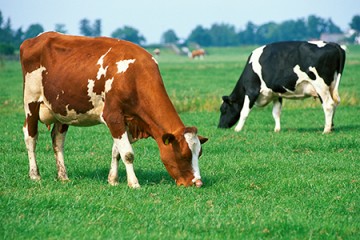