Did anybody ever see George Washington nude? 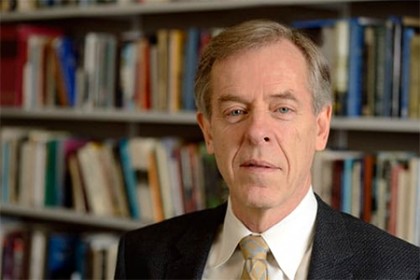 Historian Philip Morgan launched his lecture last night with that question, borrowing a jest from Nathaniel Hawthorne about the remote, steely figure the first president has become through history.

"It is inconceivable," Hawthorne once said of the notion of Washington's vulnerability. "He … was born with his clothes on, and his hair powdered, and made a stately bow on his first appearance in the world."

But Morgan had an actual response to the question: If anyone saw the president nude, it was likely his slaves—the most intimate witnesses to his life. One of those slaves, for instance, washed and prepared Washington's body upon his death.

In Mason Hall last night, Morgan, professor of history at Johns Hopkins University, spoke on the conditions of slavery at the president's Mount Vernon estate in Virginia. He's currently working on a short book on the topic, expanding on a 2005 article.

As Morgan described it, slave ownership wasn't an incidental slice of Washington's reality, but a consuming occupation. The president "spent more time overseeing slaves than he did supervising soldiers or running a government," Morgan said.

At the time of Washington's death in 1799, more than 300 slaves labored at Mount Vernon, which was by then a sophisticated 8,000-acre enterprise with five working farms.

Washington's attitudes toward slavery are known to be complex and often contradictory. Like many slave owners at the time, he tied himself "in moral knots that proved fiendishly difficult to unravel," Morgan said.

The president was said to call the practice "an abomination," and in his will emancipated all of the slaves who belonged to him. Yet he was also reputed to be a "stern taskmaster who was forever finding fault" with his slaves, Morgan said, even as they "toiled long and hard" toward his own profit.

Washington's slaves developed specialized skills in agriculture, animal husbandry, manufacturing, and craftsmanship, turning Mount Vernon into "a showcase, a self-sufficient estate," Morgan said. Because of that, the president was one of the richest men in America, a billionaire by today's measure.

Many slaves worked from daybreak through dusk, usually under white overseers. Spared from the manual labor were the slaves who worked more closely with Washington as house servants. Many of those were of mixed-race, Morgan noted, which 18th-century masters generally viewed as a more appropriate status for housework.

Though marriage wasn't legal for slaves, those at Mount Vernon nonetheless formed "a dense web of kin ties," Morgan said, with two-thirds establishing informal spouse partnerships. Rarely, though, did the spouses ever live within the same household. Some lived up on six miles apart on separate farms—a distance they had to travel at night, once work was finished.

Though Washington was known for his stern distaste for slave escapes and "adopted harsh actions to curtail" the possibility, Morgan said, about 50 succeeded in escaping from Mount Vernon over the years. In one case, Washington considered hiring a bounty hunter to search for his escaped chef, Hercules, who was never apprehended.

With one exodus, 17 slaves escaped to the British during the Revolutionary War. About half were recaptured, Morgan said, "so their fate is instructive about the odds of escape."

To illustrate the peculiarity of some of Washington's attitudes toward his slaves, Morgan looked at, of all things, dogs and teeth.

The president at one point "ordered a wholesale purge" of dogs at Mount Vernon, believing that slaves used them for "nefarious purposes" and conveniently ignoring their utility in catching game for slaves' meals, Morgan said. Washington threatened to hang any dog he found.

As for teeth, Washington—who famously battled with his own set—apparently turned to his slaves for a solution. It's likely that some of the dentures he wore throughout his life contained the teeth of his slaves, which records show he purchased from them on several occasions.

In viewing the larger context of slavery in the Chesapeake region, Morgan's talk also touched upon the lives of slaves owned by the Carroll family, including those at the Homewood estate that eventually became the site of JHU's Homewood campus, and at the Doughoragen Manor in Ellicott City, Maryland.

Morgan's lecture was presented by the Homewood Museum as part of African-American History month.