Documentary 'License to Operate' gives voice to community in crisis

License to Operate, a documentary produced by Johns Hopkins alumnus and trustee Don Kurz (A&S '77), tells the stories of reformed Los Angeles gang members who use their street cred to intervene in gang violence. They counsel families devastated by gun violence, patrol streets, and build—however grudgingly—working alliances with police officers for violence prevention. One former gang member tells the group at a meeting, "I was never a bad person, but when it came to being a banger, I was the best."

Following Thursday's film screening at JHU's Hodson Hall, a panel of experts explored the importance of storytelling and giving voice to communities in crisis.

"People in dysfunctional communities might not hear what you say, but they understand what they see," said panelist Aquil Basheer, a founder of the organization from which the film borrows its name.

Panelists agreed that enabling community members to tell their own stories can let audiences gain entry into otherwise underrepresented and mischaracterized social groups.

The post-screening discussion featured Daniel Webster, an expert on gun policy at JHU's Bloomberg School of Public Health; Dedra Layne, director of Safe Streets Baltimore, a program that uses evidence-based health approaches to address gun violence in the city; Linda DeLibero, director of the Program in Film and Media Studies at Johns Hopkins; and Basheer, who is featured in the film and founded Maximum Force Enterprises, a community-based violence intervention program. Beverly Wendland, dean of JHU's Krieger School of Arts and Sciences, moderated the discussion.

The panel talked about the impact films like License to Operate , released in May 2015, can have on efforts to prevent violence. DeLibero called the film a "quiet and powerful demonstration of what can be accomplished" when people are allowed to tell their own stories.

DeLibero's own efforts to promote storytelling for at-risk youth recently led to the creation of the youth filmmaking program at Johns Hopkins University. The program will give students and young adults from neighborhoods across Baltimore the opportunity to document their world on film.

Layne added that films help communities see and understand themselves, their reactions to tragedy, and how they can create positive impact in their own neighborhoods. 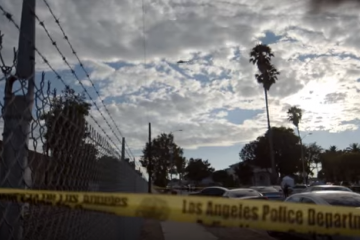