By studying stroke victims who have lost the ability to spell, researchers have pinpointed the parts of the brain that control how we write words.

In the latest issue of the journal Brain, Johns Hopkins University neuroscientists link basic spelling difficulties for the first time with damage to seemingly unrelated regions of the brain, shedding new light on the mechanics of language and memory. 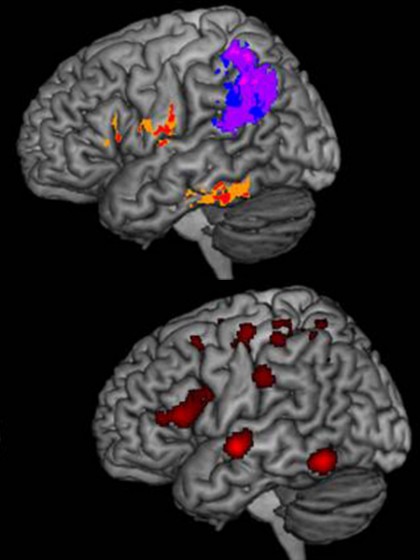 Image caption: Top: a composite image showing the brain lesions of people with spelling difficulty after strokes; bottom: an image of a healthy brain depicting the regions typically active during spelling

"When something goes wrong with spelling, it's not one thing that always happens—different things can happen, and they come from different breakdowns in the brain's machinery," said lead author Brenda Rapp, a professor in JHU's Department of Cognitive Sciences. "Depending on what part breaks, you'll have different symptoms."

Rapp's team studied 15 years' worth of cases in which 33 people were left with spelling impairments after suffering strokes. Some of the people had long-term memory difficulties, others working-memory issues.

With long-term memory difficulties, people can't remember how to spell words they once knew and tend to make educated guesses. They could probably correctly guess a predictably spelled word like "camp," but with a more unpredictable spelling like "sauce," they might try "soss." In severe cases, people trying to spell "lion" might offer things like "lonp," "lint," and even "tiger."

With working memory issues, people know how to spell words but have trouble choosing the correct letters or assembling the letters in the correct order—"lion" might be "liot," "lin," "lino," or "liont."

"I was surprised to see how distant and distinct the brain regions are that support these two subcomponents of the writing process, especially two subcomponents that are so closely inter-related during spelling that some have argued that they shouldn't be thought of as separate functions," Rapp said. "You might have thought that they would be closer together and harder to tease apart."

Though science knows quite a bit about how the brain handles reading, these findings offer some of the first clear evidence of how it spells, an understanding that could lead to improved behavioral treatments after brain damage and more effective ways to teach spelling.