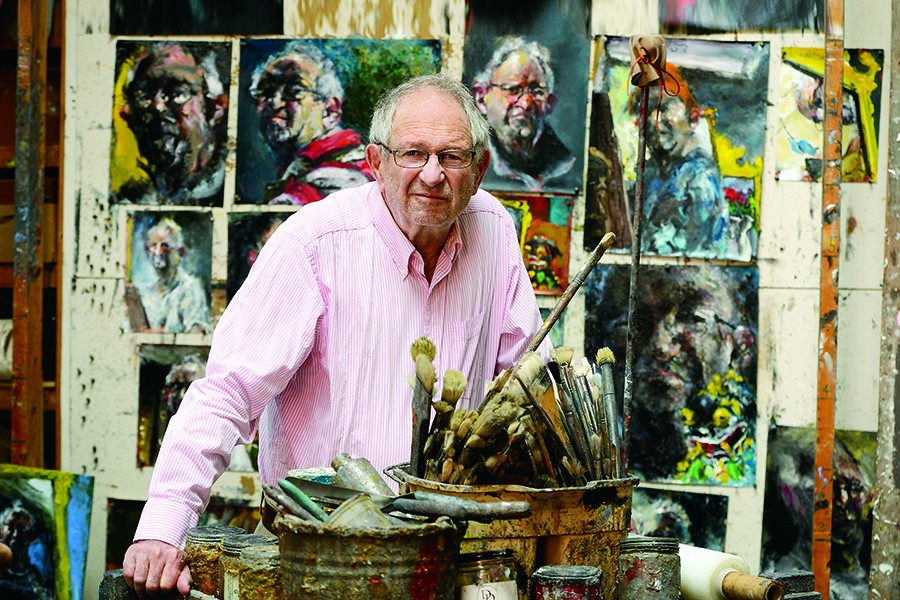 Over the past 55 years, the celebrated artist and respected educator Raoul Middleman estimates that he has produced a staggering 20,000 paintings and drawings: landscapes, cityscapes, seascapes, figures and portraits, equestrian images, still lifes, narratives, and more than 1,000 self-portraits. His work is included in collections at the Metropolitan Museum of Art, the National Gallery of Art, Corcoran Gallery, and the National Academy of Design. Meanwhile, he has served continuously on the faculty of the Maryland Institute College of Art since 1961, chairing its painting department from 1975 to 1978.

Middleman took a somewhat circuitous path to his dual careers. After graduating from high school in three years, he entered Johns Hopkins intending to study physics but graduated three years later with a degree in philosophy. Courses in the Romantic poets, Milton, art history, and philosophy lured him away from his previous infatuation with mathematics.

"I had what now would be called a humanities degree," explains Middleman, 80, sitting in the midst of his vast, paint-spackled artist's studio at his home in Baltimore. "But that didn't exist then; they called it philosophy."

With bohemianism at its midcentury apogee, Middleman considered becoming a writer. He roamed the country Jack Kerouac-style for a year after graduation, eventually landing in New Orleans. Afflicted with writer's block, he turned to painting—he had drawn and painted casually from an early age—at the urging of his then-girlfriend, hawking "uglified" caricatures on the city's streets.

He has been a fine artist ever since, at first working as an abstract expressionist; then pop art briefly seduced him; finally, his own style, often termed "expressionist" by critics, evolved in the 1960s, with assertive brushwork, tactile surfaces, a sensitivity to color, and depictions of the quotidian, the mythological, and mashups of the two.

Middleman, however, is wary of such constricting labels. "Style is not a conscious thing," he says. "It's the misbehaving saga of my intrinsic choices that decide a style. The work shows me; the style chooses me; I am the servant of the style."

Primarily self-taught, he studied art formally for only two years in the late 1950s and never earned a degree in the field, absorbing art history (about which he speaks insightfully and confidently) by reading on the sly while working at a library, plus visiting the National Gallery. Nonetheless, he managed to snag a teaching job at MICA after the college's then-president saw his work.

Middleman cites his Hopkins classes in literature with professors Earl Wasserman and J. Hillis Miller as essential training for his role in the classroom: "They were invaluable mentors. Because of them, I have an ability to empathize with work that's not mine and to be articulate about it—that's the core of my teaching. I try to have some empathy with the components of students' sensibilities. I try to get inside what they're after and then work from their point of view rather than my own."

His own point of view remains fluid, open to myriad possibilities. Frequently, he explains, he has no idea where a painting is headed or what it means, sometimes discovering what he really has done long after the piece's completion. And he works restlessly and relentlessly. "I would say 70 percent of my oeuvre has been done in a single session, within four hours for the paintings," he says. "The narratives take longer, from a week to sometimes years. There is no rule; each has its own imperative."

With a resume that already boasts countless solo and group exhibitions, Middleman enjoyed a career retrospective of his work this past year at the University of Maryland University College, while MICA showed 400 of his self-portraits (titled "Selfies").

By painting his own likeness, Middleman feels no compulsion to flatter another person. Additionally, he can experiment, he does not need a model, and he can stay active. "Each time I do a self-portrait, it comes out different," he says. "Out of accident and intentionality combined, you get an image that awakens you to a sense of being alive in the present tense. Each is an attempt to find out who I am. It's an infinite process of discovery. I'm constantly learning from this."

Middleman's passion for art—for discussing it, for teaching it, for reading and writing about it, for seeing it, and, especially, for making it—remains undiminished. "What really is interesting is the work itself," he says. "It's such a great experience to take colored mud and oil, and put them on a blank surface and see an illusion of ontological proportions come into positive existence."