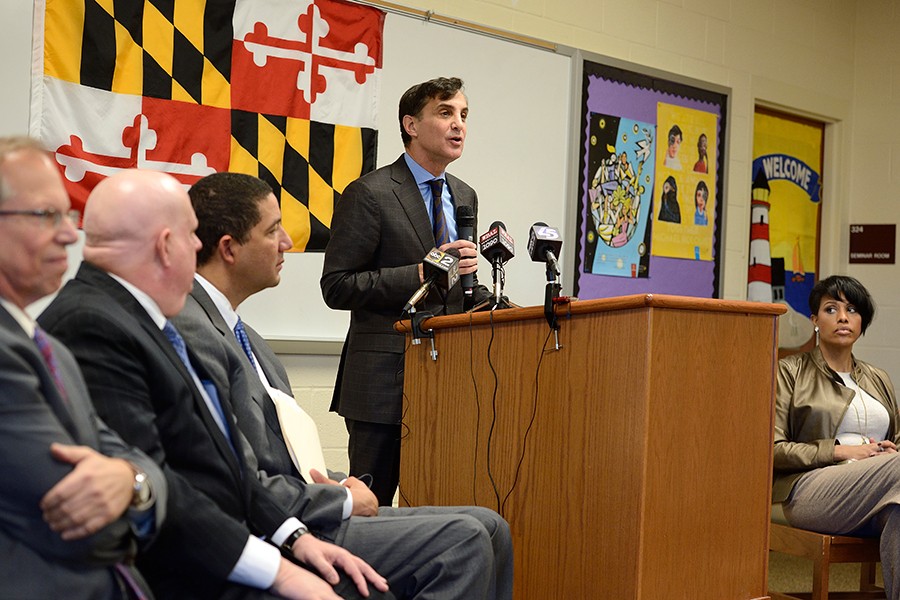 Four years ago on a trip to New York City, Johns Hopkins University President Ronald J. Daniels had an opportunity to see a fledging education program in action. 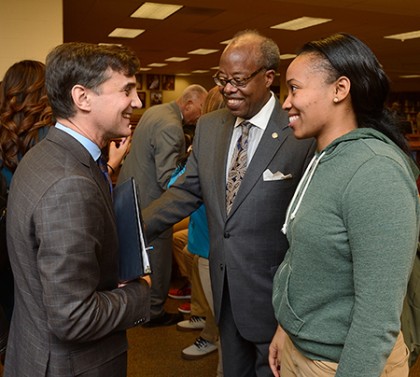 Industry giant IBM had recently partnered with the New York City Department of Education and New York City College of Technology to launch a six-year program in Brooklyn that charted a direct career path for participating high school students. In addition to learning traditional core subjects, students in P-TECH—Pathways in Technology Early College High School—received two years of free college-level instruction and advanced training in STEM-based fields so that, upon graduation, they would be first in line for attractive jobs at businesses such as IBM.

Inspired by what he saw, Daniels believed this high school-to-industry pipeline model could be replicated in Baltimore, to better prepare students for entry into the job market. And now it's set to happen.

In his remarks at the launch event, Daniels said Johns Hopkins is "keenly interested" in partnering with Dunbar—with which the university and health system already have a long-standing relationship—to open a health-based P-TECH school.

"Our interest is grounded in a desire to bolster the health of our community and create clear and credible pathways to good jobs right here in Baltimore," Daniels said. "We know the ways that meaningful work can provide dignity and independence, and as an enlightened anchor in this city, we altruistically want to support those aims."

P-TECH is essentially a separate academic track based at an existing public high school. It matches local school districts, community colleges, and companies committed to taking on qualified graduates. Within six years, students graduate with a high school diploma and a no-cost associate degree from an accredited community college, along with the skills and knowledge they need to continue their education or step into jobs in a variety of industries.

"Maryland has some of the best schools in the country, but there is room for new, innovative ideas like the P-TECH model to streamline the path from education to employment," Hogan said today. "P-TECH graduates will have the opportunity to earn high school diplomas and associate degrees in the technical skills sought by employers, and also contribute to strengthening Maryland's economy through careers with their industry partner."

Since the first P-TECH program launched in 2011, the network has grown to 40 schools across three states: New York, Illinois, and Connecticut. By 2016, additional P-TECH schools around the country and in Australia will raise the number to as many as 60 locations serving tens of thousands of students.

Currently, there are more than 100 companies affiliated with the schools across a range of sectors, including health IT, advanced manufacturing, and energy technology. In New York City, industry partners include Montefiore Medical Center, New York Presbyterian Hospital, ConEdison, and Regeneron.

The P-TECH schools are open to all students. This past summer, six students graduated from Brooklyn P-TECH in just four years with both their high school diplomas and free associate degrees in technology. Four of the six students were the first in their families to graduate from college. All of them were offered positions with IBM. Three took those high-paying jobs, and three others are continuing their education with scholarships to four-year universities.

At Brooklyn P-TECH, 75 percent of fourth-year students at have met the New York State college ready standard in both English and math.

Daniels said he deeply appreciates the efforts of Hogan and others to offer this program in Maryland and serve communities in need.

"At heart, today represents the need to think anew about so many concerns in Baltimore," he said. "We must leverage our imagination and courage to try new approaches. This isn't a moment for business as usual, and I am enthusiastic about the opportunities that P-TECH offers"