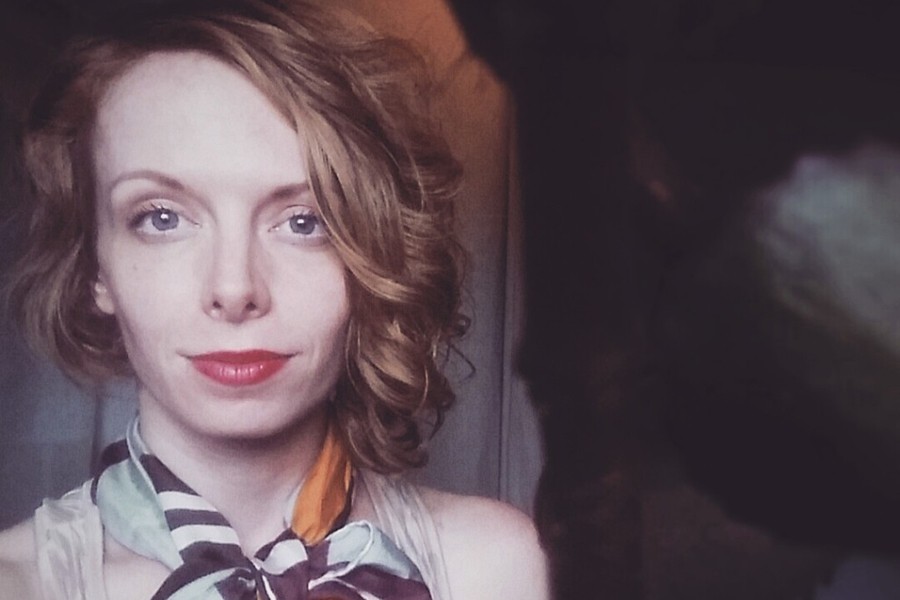 Since coming to Baltimore as one of the co-founders of the creative hive the EMP Collective, Carly Bales has become an integral actor/performer in both the city's do-it-yourself theater and experimental performance art communities. 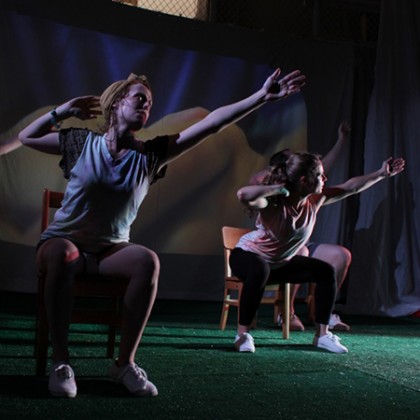 Image caption: Bales (left) performs in 'The World Is Round'

Last year she created the monthly Pulse performance art salon and became one of the three co-founders/organizers behind the Le Mondo project to create an artists-owned and -operated performance space and cultural hub in downtown Baltimore.

The Hub caught up with Bales to talk about the assumed differences between performance and theatrical arts, what the two disciplines can learn from each other, and the role performance can play in community building.

Tell me about your own approach to and ideas about performance as an art form. I ask because I'm most familiar with you as an actor—granted, the plays I've seen you in haven't always been conventional theater by any stretch of the imagination, but they are on some level staged narrative productions, however much their worlds might differ from observable reality. And while there are many aspects of theater performance that overlap with performance art, they can be two very different things.

I'm more interested in tackling other people's assumptions of what performance art and theater are and trying to muddle the lines between those assumptions. I was at a talk during the [performance art laboratory] LabBodies event at Gallery CA this past summer and that question came up, the hard line between "theater," which is typically viewed as the great American stage play, and performance art, which is more avant-garde, things that can be articulated in galleries, and things that are more solo work. My response then is the same as it is now—I'm more interested in smashing those two together and obliterating those boundary lines between the two. I know that the stereotype in people's minds of performance art is a solo performer doing some sort of repetitive action in a gallery space and its opaque and not accessible and there's no narrative, whereas theater is narrative-driven, and everything is transparent and formulaic. I don't think that's the case, and I especially don't think that's the case in this city.

I wanted to ask about the backstory behind Pulse. Did you see a need for a regular forum for the performance and discussion of this work? That kind of venue doesn't really exist here, and while some of the city's universities have theater and/or visual art departments and faculty, there isn't a training space where this kind of work is cultivated.

That's a huge part of it. I think the reason we started the space at EMP and kept going with it was the excitement of being able to provide a platform for cross-pollinations for people who had pigeonholed themselves into a specific artistic discipline. I also think that there's a downplaying of performance art as a "legitimate" art. That's changing—performance art is becoming less and less fringe again and more and more something that museums and commercial galleries want to co-opt. There's been a lot of discussion in the mainstream art world about how performers and performance art—and ephemeral art in general—fits into the gallery and museum model. And since we're not constrained by any of the mainstream museum or commercial gallery inhibitions, it just seemed like a perfect place to create that platform for artists and audiences.

And that's huge for me. Given my own practice and dissatisfaction of going to galleries and not feeling that [performance] was that present, I felt there was something lacking. You see performance pieces pop up here or there but there wasn't a consistent venue to see new and evolving works and also to push people to create new and evolving works. With theater there's usually more of a lengthy process [in development] and there tends to be higher stakes behind it as a full production. This [series] provides a platform where people could feel the motivation to keep creating new works to succeed or fail but not feel the weight of the world upon them of an entire production.

How is it going? What has this first year and a half been like? Is there a core group of performers/audience who come? Is it growing?

It was slow going at first—there were probably 10 people the first time I hosted an event, but it's been growing pretty steadily over the past year and a half. There is a core group of people who now I think identify more readily as performance artists, and I see them presenting more around town. I also do see, with this series and Hoesy Corona's and Ada Pinkston's LabBodies that came up at the same time, a refocusing on a performance that interacts with other mediums and venues outside of a typical theater space. That's been very encouraging. And there are a lot of people who came to see an event who considered themselves film or theater actors and never considered the possibility of creating a performance as a solo artist or small group, and they've been encouraged to put themselves out there in a new way, which I think is very exciting.

Speaking as a performer who wants to muddle the line separating theater form performance, what can they learn from each other?

There's a tendency for theater-makers to cling to a dramatic arc with identifiable characters and a rigid approach to storytelling, and I think that traditional theater could stand to take cues from performance art in the immediacy of it and the general unwillingness to neatly tie all the loose ends up with a bow. Primarily, the immediacy of it though—there can be something slightly removed about watching a play in more traditional venues.

But I'm also interested in how more traditional elements of theater, such as character and narrative, can be infused into performance art. Right now I see a lot of performance art that's not dialog driven, which is a possibility for it to be. There's not a lot of characters being created per se. I'm interested in seeing more performance pieces that have a dramatic arc to them, even in its more obtuse way. So there's a potential to throw elements that are seen in both into the mix of the other.

I wanted to ask about your experience as a co-founder/member/curator/organizer with EMP, and now as a co-founding member of Le Mondo: what role can performance arts play in community building—within the arts community, and within the communities in which artists live and work?

It all boils down to storytelling. I keep going back to it, but this is an art form of the present, regardless of whatever time period it might be embodying. Performance has a huge potential to spark conversations. People see their story or a story they weren't made aware of until this moment enacted in front of them in a room. It's kind of base to say, but bodies in a room telling a story is such a huge thing. I think it goes back to something much more ancient and its potentially more engaging to somebody to see people enacting a story or an issue.

Even just the act of being in a room and activating a space that otherwise would be abandoned. The space that we're in [with EMP], we're on a month-to-month lease and we have been since 2012. So it stands to say that it would just be another abandoned building in Baltimore City had someone not moved in and activated it with life and presence and energy. So even on that more physical level it plays a huge role in a community.

There's an overarching trend in the past few years when writers talk about artists in the community that there's this notion of artists as savior, which I think is completely misguided and misunderstood in regard to the role of the artist as a community member within a larger community. The most impacting element to me of performance within its own arts community and in its larger community is that element of presence and immediacy and bodies in a room communing together. I'm finding that people just showing up and being together in the same space is an increasingly important element of any aspect of community building.