Johns Hopkins researchers today introduced EpiWatch, an app designed to collect data from patients with epilepsy before, during, and after their seizures. The app, which runs on Apple Watch and iPhone, uses the open source ResearchKit framework designed by Apple. 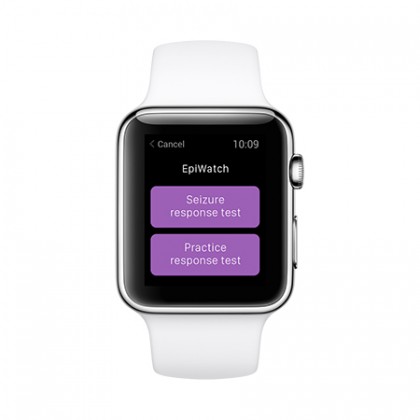 The data gathered for the study by the app—including physiological changes, altered responsiveness, and other characteristics of recurrent seizures—will be used by researchers to better understand epilepsy, to develop new methods for (and determine the role of technology in) monitoring and managing the disorder. More than 2.5 million people are living with epilepsy in the United States.

"Physicians often ask patients to record their seizures. But that can be hard, especially when a patient loses consciousness. EpiWatch collects data that helps researchers better understand epilepsy while helping patients keep a more complete history of their seizures," says Gregory Krauss, professor of neurology at the Johns Hopkins University School of Medicine. "The app also provides helpful tracking of seizures, prescription medication use, and drug side effects—activities that are important in helping patients manage their condition."

Johns Hopkins' EpiWatch modules, which can be downloaded for free from the App Store, enable research participants to complete an interactive, informed consent; track their seizures in real time, including prompts on the Apple Watch testing awareness; and answer research surveys and other tasks. Users can review their data and compare their symptoms to others in their demographic with similar seizures. More information is available at www.hopkinsmedicine.org/epiwatch

The back-end data solution is being provided by Acuma Health, a division of Smart Monitor, via a secure health informatics platform that protects patient information and provides custom analytics dashboards to researchers.

The app's journaling function prompts users to answer a series of questions daily:

Epilepsy is a disorder of the brain in which seizures, caused by abnormal neural activity, disrupt normal brain function. Seizures can vary in their type and severity, sometimes causing convulsions and other abnormal movements, confusion, or loss of consciousness. People with uncontrolled seizures may experience impacts on their independence and quality of life.

"Many patients have a brief lapse of awareness during their seizures that may not be apparent to them or to others around them," says Nathan E. Crone, associate professor of neurology at the School of Medicine. "EpiWatch allows patients to find out for themselves if this is a problem so they can get more help."

EpiWatch is most appropriate for patients with epilepsy who may experience an "aura" that signals an oncoming seizure. When this warning symptom occurs, the user—or a caregiver—can tap an icon on the watch face to activate the app. The app then starts recording heart rate and movements. The app also requests patient participation in a specialized memory game to evaluate patient responsiveness during the seizure. It is the first medical research app to include a cognitive test of this nature.

Krauss and Crone have been working with developers at THREAD Research to build EpiWatch. The app makes use of many of the Apple Watch sensors—including the accelerometer, which detects movements, and the gyroscope, which determines orientation in space—to measure and record movements and falls during seizures. The app also uses Apple Watch's heart rate monitor, since heart rate can rise significantly during seizures.

Krauss expects that, after a year or two of data collection, Johns Hopkins will be able to develop an app that can detect most seizure types and generate an alert to notify caregivers and emergency personnel, if needed. This could not only potentially save lives, it could also allow people with epilepsy to have more freedom, Krauss says.

"We foresee the app giving some parents the confidence to allow their children to play on their own," Krauss says. "For some adults, using it might allow them, for the first time, to live safely alone."