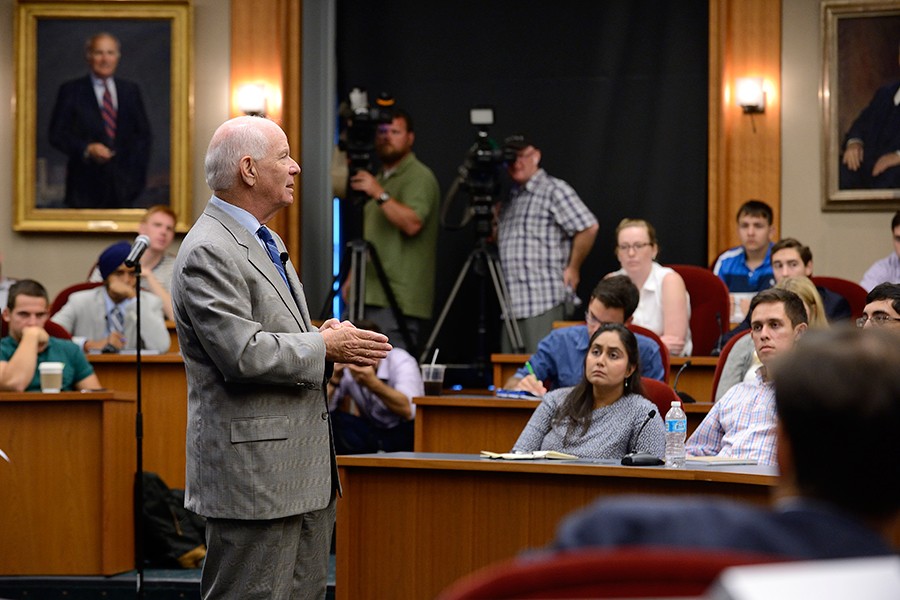 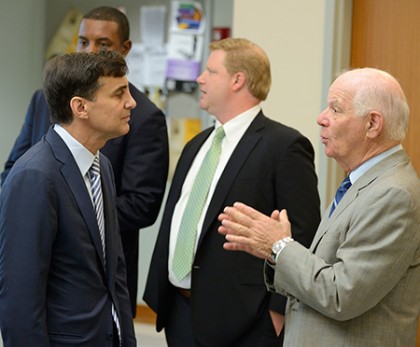 Under the deal that the U.S. and five other nations reached with Iran in July, international sanctions against the Islamic republic would be lifted in exchange for Iran limiting its nuclear program so it cannot build nuclear weapons for a decade or more. But the agreement has been met with opposition from some U.S. lawmakers leading up to a mid-September up-or-down vote that would either clear the way for the historic deal or halt it. President Obama has said he will veto any resolution that does not approve the deal.

Cardin, a second-term Democratic senator from Maryland and ranking member of the Senate Committee on Foreign Relations, has not determined whether he will support the deal. He has reached out to experts and continues to seek the perspectives of a diverse range of Marylanders through discussions like the one he had with JHU students today. The event was open to between 40 and 60 students.

"Our young people have the most at stake when we consider questions of long-term global stability, so this opportunity to test my thinking on the [agreement] with students is an integral part of my decision-making process," Cardin said in a statement. "Maryland's universities draw some of the sharpest minds in the world, and I appreciated learning more about their views on the world.

"There is no trust when it comes to Iran, and it is in our—and the world's—security interest to ensure that Iran is blocked from ever having a nuclear weapon," he added. "Congress presently faces a solemn charge to fulfill its oversight responsibilities and to conduct a thorough and rigorous review of the [agreement]. Each member of Congress must make a personal and very individual decision on whether he or she believes the agreement will keep Iran from becoming a nuclear weapon state and further the national security and foreign policy interests of the United States. Today's discussion with students at Johns Hopkins University represented an important part of my deliberations."

"Indeed, this kind of dialogue is the essence of what we do at Johns Hopkins," Daniels said. "As our nation wrestles with daunting concerns, a university like ours can play a critical role, fostering an environment where active discussion flourishes, controversial ideas are discussed and debated, and rigorous analysis helps to discipline emotional and difficult conversations. And we do so with the input of our future scholars, public servants and leaders—the intellectually curious and bold students in this room, who are committed to deepening our understanding of the complex international landscape."

The Iran nuclear deal has been at the center of a contentious—and increasingly bipartisan—debate since it was announced in July. But The Washington Post reported Monday that it now appears Obama will get the votes he needs from Congress for the agreement to go forward:

As Congress prepares to return from its August recess, it looks like opponents have failed. Senate Democrats have steadily come out in support of the accord, and we are now awaiting a signal of support from Senator No. 34—a magic number that will allow Obama to sustain his veto should Congress pass a resolution of disapproval that could weaken the deal.

Currently, 31 are solidly supporting the agreement, with two more leaning toward voting for it. Democrats might even be able to reach an even more magical number for Obama, 41, which would effectively prevent the resolution of disapproval from even coming to a vote in the Senate. That would be an even bigger victory. Obama has so far lost two Democrats on the deal. He can afford to lose up to five.