Researchers learn how and when the visual cortex of blind children changes to respond to spoken language, sound, music 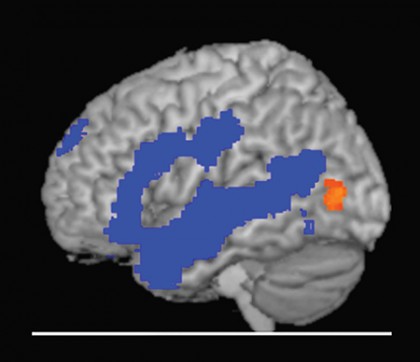 Image caption: This illustration depicts areas of the brain that are activated in children when they listen to stories. The brain areas in blue are activated in sighted children. They include the prefrontal cortex and lateral temporal cortex. The part of the visual cortex that responds to language only in blind children is depicted in orange.

The results, published this week in The Journal of Neuroscience, suggest that a young, developing brain has a striking capacity for functional adaptation.

"The traditional view is that cortical function is rigidly constrained by evolution. We found in childhood, the human cortex is remarkably flexible," said Johns Hopkins cognitive neuroscientist Marina Bedny, who conducted the research while at Massachusetts Institute of Technology. "And experience has a much bigger role in shaping the brain than we thought."

Bedny, an assistant professor in JHU's Department of Psychological and Brain Sciences, studied 19 blind and 40 sighted children, ages 4 to 17, along with MIT cognitive scientists Hilary Richardson and Rebecca Saxe. All but one of the blind children were blind since birth.

The researchers concluded that blind children's 'visual' cortex is involved in understanding language.

Working with individuals who are blind gives cognitive researchers an opportunity to discover how nature and nurture, or a person's genes and their experience, sculpt brain function. Though scientists have shown that occipital cortexes of congenitally blind adults can respond to language and sound, this study provides the first look at how and when the change in brain function occurs.

The team found the blind children's occipital cortex response to stories reached adult levels by age 4. Because spoken language had colonized the brain's visual region so early in the children's development, the team realized the brain adaptation had nothing to do with a child's proficiency in Braille, a tactile writing system used by those who are visually impaired. Scientists had previously guessed that brain plasticity for spoken language in blind people had something to do with Braille.

Blind children's occipital reaction to the other sounds, music and foreign speech, did increase as they aged.

"Early in development, the human cortex can take on a strikingly wide range of functions," Bedny said. "We should think of the brain like a computer, with a hard drive ready to be programmed and reprogrammed to do what we want."

This research was supported by the David and Lucile Packard Foundation and the Harvard/MIT Joint Research Grants Program in Basic Neuroscience.